Cattle Cafe is a Hong Kong styled cafe located on Nelson and Kingsway in Burnaby, where the old Death by Chocolate used to be. They have another location in Richmond as well. The cafe has kind of a small layout, but it didn’t stop customers from waiting for a table. Speaking of waiting, there isn’t much waiting room so it’s best to put your name on the list and wait outside (unless it’s cold, like it was the night I went). The cafe was recommended by a good friend of mine as an alternative to some of the more seedier HK cafes around Burnaby. We came past 7:30pm with a party of four but still the place was very busy! There are a couple other places around it (a noodle house and a sushi place) but they were all deserted compared to Cattle Cafe. 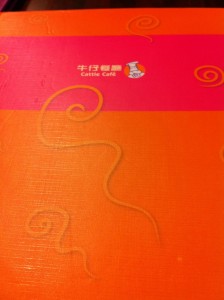 What I like about the HK cafe is definitely the style. There are many that have such funky, space age or retro styles, that I do admire the thought that goes into it. What restaurant has a hot pink and orange menu?! 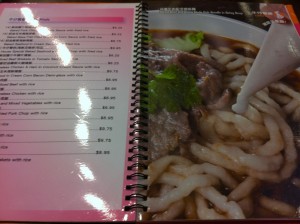 Speaking of which, I do enjoy the big pictures of menu items, as they look tempting and make my mouth water! 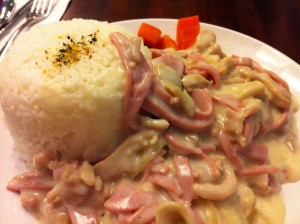 I wanted to try the Chicken with coconut and mango cream sauce dish but it wasn’t available at the time I went (only available 3-6 and 9-close), so I got the next best thing – Ham and Chicken with coconut sauce. The serving was enormous. For $8.95, you get a plate full plus a drink ($1 extra for cold drinks). The rice was towering, I would say maybe two servings of rice. The chicken and ham were tender and there was onions and mushrooms stir fried into the sauce as well. I really enjoyed the coconut sauce – it was not watery or too thick. I ordered the milk with coffee and tea (a staple of all HK cafes). Now, this mixture might sound strange to some people, but its actually quite tasty. It doesn’t have too much of a coffee taste to it, it’s more milky. Try it the next time you go out to a HK cafe if you haven’t done so already! 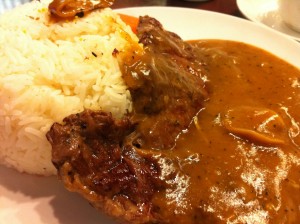 My husband ordered the Rib-Eye steak with mushroom, peppercorn and red wine sauce. It was also a big portion. He said it was spicy (but from the peppercorns). $9.25. 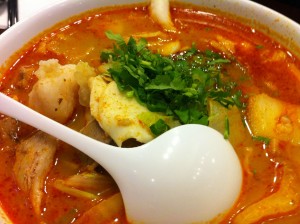 My friend ordered the Laksa soup (I’m not entirely sure whether it was the soup combo or the stand-alone Laksa soup), but it was a very big bowl – it even had rice in it. I must try it next time, it looked spicy and yummy. $7.50. 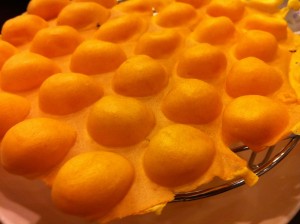 He also ordered the Bubble Waffle. I didn’t try it, I can’t say I ever have tried it before, but it looked pretty interesting. This is a common dessert served in the night market. $3.75. 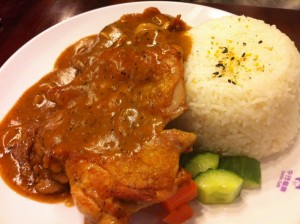 Finally, my friend’s girlfriend ordered Chicken w/mushrooms in black pepper sauce.  I don’t know where these cafes get monster sized chicken, but needless to say, she had to pack half of hers to go! $8.75.

Overall, I thought the place was solid for a HK cafe outside the ‘usual’ asian areas. The portions were enormous, the food was tasty and the service was fair. I’d definitely go back to visit! As with most cafes, this place is CASH ONLY.

The food was tasty, much more so than many other cafes I frequent. They offer a variety of dishes common to cafe food and they have a great soup combo for under $8.

The portions are big – I say this a lot but sometimes portion size doesn’t equate good taste. This place definitely has both good portion size and taste.

Cleaner, newer and brighter than most cafes. The only gripe is that the place is a bit on the small and cramped size.

Standard service, nothing too bad yet nothing too good either. Most of the time, they’re so busy so you have to wave them down for them to take your order or bring your bill. 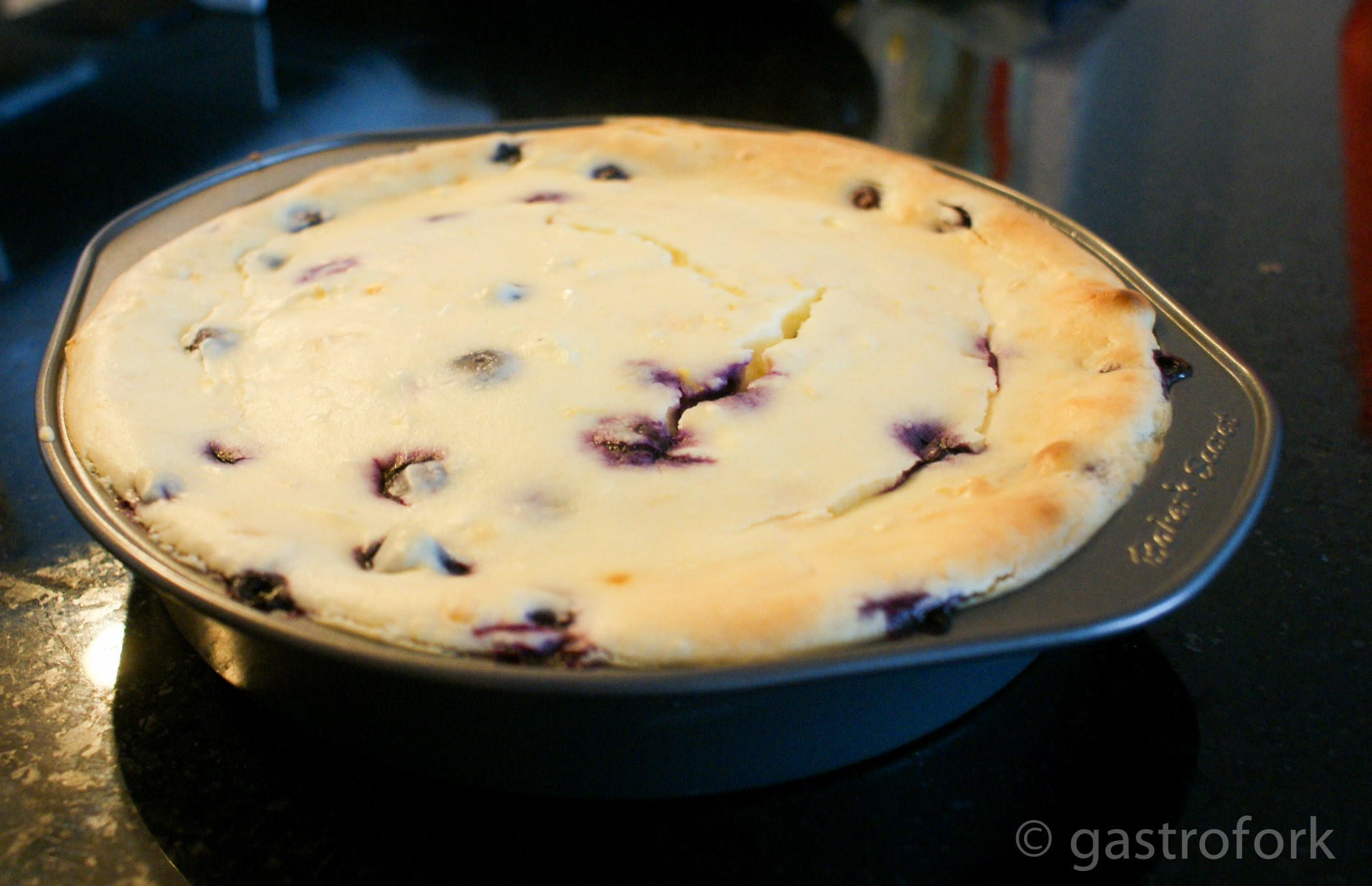 10 Places to Visit on Bowen Island 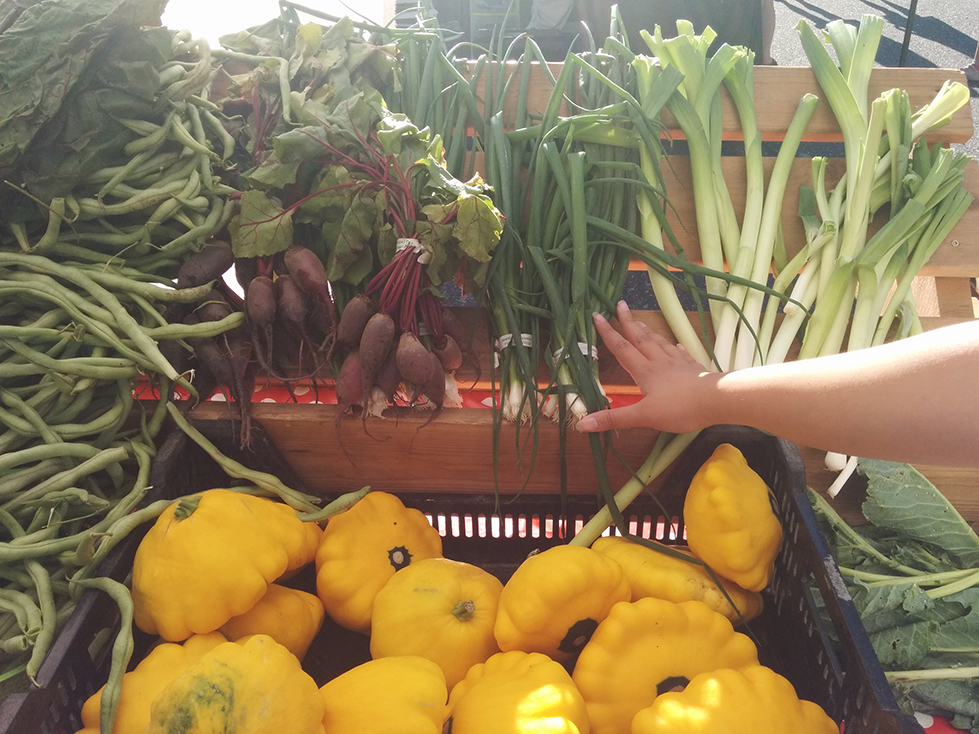