Nestled in a plaza on busy Alexandra Road, Matsuyama is packed on the Friday night we decided to try it out. They take our names and say it’s a 45 minute wait. Bummer.

Thankfully that 45 minute wait was actually only 20 minutes, so I’m glad we decided to give it a try and wait. The late night special runs after 9pm and on Friday and Saturdays they’re open till 1.

The crowd of people is a diverse one – some teenagers, some couples, Asians, East Indian, Caucasian…everyone can enjoy Matsuyama. There are a lot of young guys here as well – if you didn’t know already, Matsuyama is infamous for their ‘cute’ Asian waitresses. For us, we were served by one of the managers (I’m assuming) who happened to be a guy.

Anyway, onto the food – the most important part of every review!

Beef Sashimi ($4.95). The beef sashimi came with about a dozen slices and a bit of spicy sauce on the top. The beef was seared perfectly around the edges, but was a bit thicker than we’re used to so it was slightly chewier. I loved how the marinade for the beef was underneath and the radish was soaking in it. I normally don’t eat the radish but it was pretty tasty with the sauce. 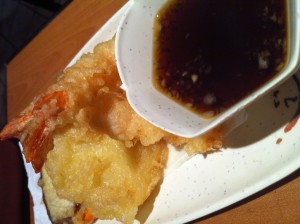 Prawn/Vegetable Tempura ($3.95). Five pieces – two prawn, a potato, eggplant and carrot slice. It was freshly made as it was piping hot when we bit into it. There was not too much batter like some other places that pile it on so that you can’t even tell what kind of vegetable you’re eating. 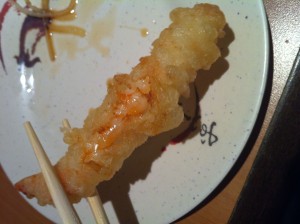 The prawn tempura seemed kind of smaller than normal – I say about 2.5″. 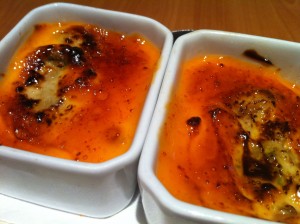 Oyster Motoyaki ($1.99 each). Okay so I’m allergic to shellfish, but for some strange reason – if it isn’t directly in the shell, I can eat one or two and I’m fine. Their oyster motoyaki is served in individual pots and are really good. The cheesy mayo sauce had corn bits and a sweet taste to it. The oyster isn’t small either, well sized and isn’t overdone (ie, rubbery). I wanted to order another one but I was afraid to..maybe I’ll take a Reactine next time we come here.

The sashimi is well proportioned for a late night menu – the salmon is thick and longer and has a good taste. The tuna was a bit frozen and had a slightly fishy taste to it. The Hokkigai (the surf clam) which happens to be one of my favourite sashimi was fine.

At one point I was eating a piece of salmon and ick! – there was a bone. I don’t know why but whenever I’m eating food that I don’t expect to have any bones in it and it does – it puts me off from eating entirely. Blech. I let Brian eat the rest of the salmon and ate the Hokkigai.

He also ordered the tamago as he likes sweet egg, he said they were pretty big slices of tamago. 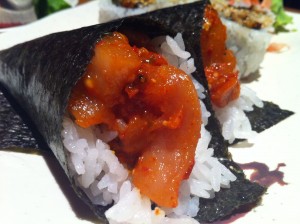 The spicy salmon cone was jammed pack with both rice and salmon. Brian was saying the spicy sauce was similar to the spicy sauce that comes with unagi in a can. In any case, it was a slightly different spicy taste than most restaurants we’ve been to – probably more chili flakes and a different kind of sauce (definitely not Sriracha!). I liked how the roll had salmon all the way through, as opposed to just being nestled on the top of the cone.

Wakame Salad ($2.95). They definitely do give a ‘bigger’ portion here than most other restaurants – I would say maybe double the size. I’m a big fan of Wakame Salad too. It’s a bit dry and tasteless on the top but once you mix it, it has a better flavour to it. 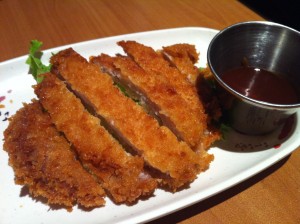 Tonkatsu ($3.95). I also love Tonkatsu which is breaded pork. It was again, freshly made as it came out piping hot and very crispy. The batter was not too thick either, so it was enjoyable.

I can’t say I enjoy unagi too much, but I don’t mind it in a roll. The roll was a bit on the smaller size, but I guess its because it was only unagi in the middle! It had less of that fishy taste I don’t seem to like and was still kind of moist from the sauce it was probably marinating in. 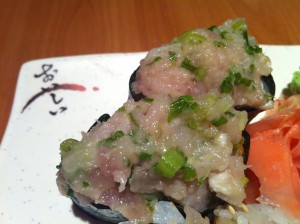 The Negitoro nigiri (tuna with chopped green onions)- which is a strange concept to me – seeing that it’s kind of a combination and most nigiri I’ve seen have been unadulterated fish or something solid. They really piled it on, which was great – I got to pick at the top with my chopsticks and nibble at it slowly. The tuna was a bit fishy, but I figured it would be since it was all mushed up. The green onions really give a refreshing taste to it though.

It’s a bit of hit and miss with dishes here.

Everyone says the service is bad here, but our servers were fine and prompt.

One of the more cleaner Japanese places, it seems like they have a good space and plenty of booths for bigger parties.

While the late night menu concept is good, you’re only really saving $1 off most of the menu items. Our bill came to about $50, but it was nice to be able to have something that didn’t feel like leftovers at the end of the night (ie, late night AYCE). 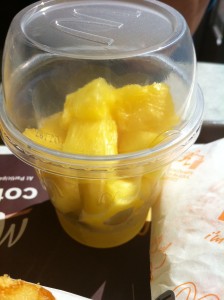 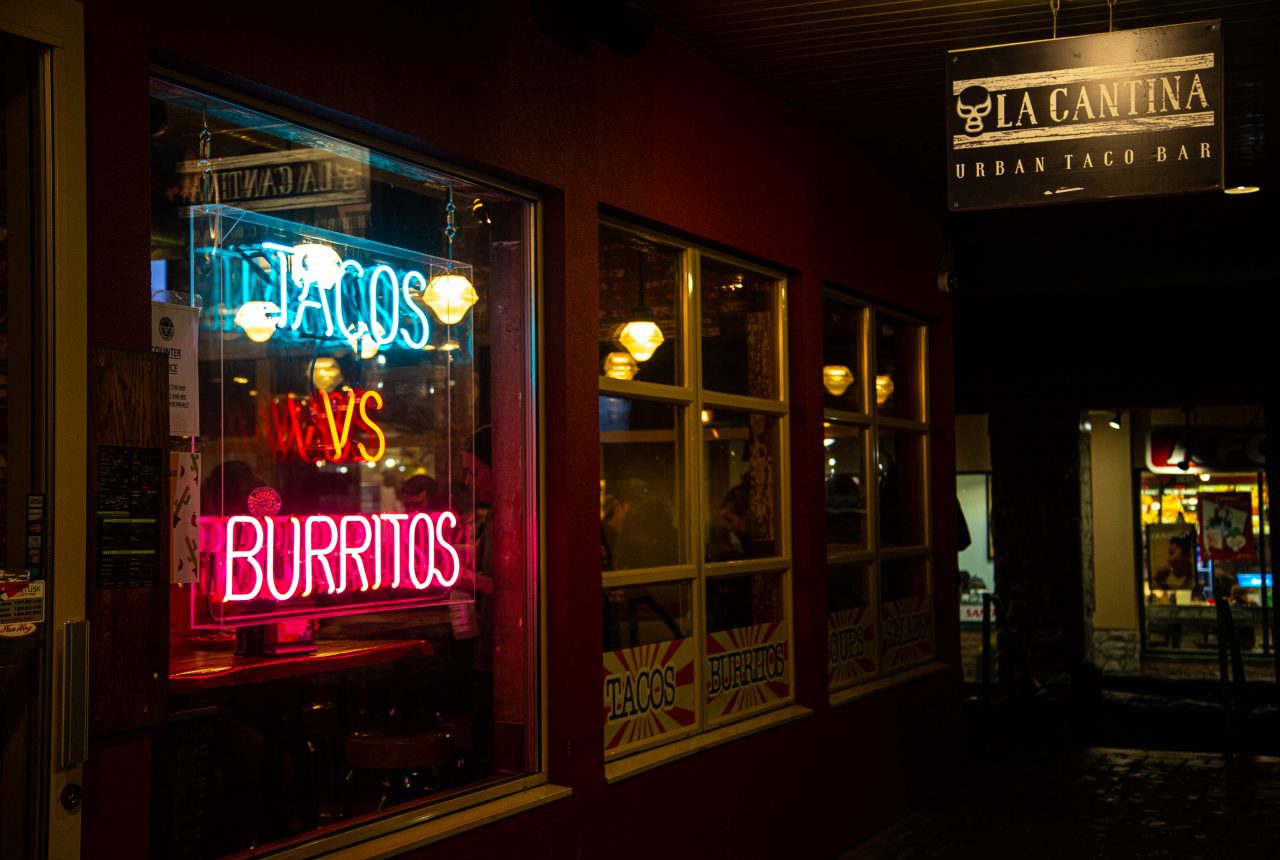