Las Margaritas is one big puzzle. My previous experience (which was probably 5 years ago or even longer) was not that great, so when my BCIT friends wanted to meet there – I was kind of dreading the experience.

I did some research on Urbanspoon and Yelp and saw that reviews were pretty divided. On one side you have people saying this is the best Mexican food you can get in town, the other say it’s bland, the food is subpar. I was tending to lean on that side as well, but I feel bad for judging a place I haven’t been to in so long. I was so glad that I was wrong.

I was thinking about it while I was eating my meal, how maybe my taste has changed since then or maybe the quality had gone up since the last time I visited.

One thing I will complain about (and this isn’t the only restaurant that notoriously does this) is the fact we made reservations for 7:15pm, but we didn’t get seated for almost an hour. We were all catching up so the time went by, but why bother with reservations if restaurants can’t honour them? 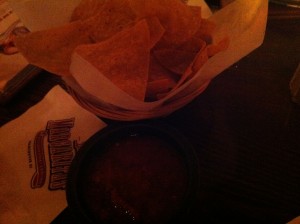 When we were finally seated, we were given “free” tortilla chips and dip. It was great because we were all starving and the chips were warm and the salsa wasn’t too bad. The reason behind the quotations on free was – they actually DID charge us for the chips, 50cents per person. I don’t think anyone noticed but me. Adrian ordered Guacamole as an appetizer, so as soon as it arrived, we dug in. While it was tasty because it was definitely made fresh – it didn’t really have much of a wow factor to it. I think if they had added cilantro or added more lemon it would’ve been better. 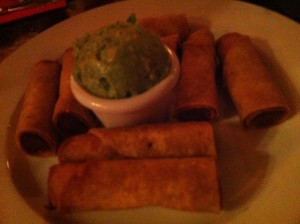 Our second appetizer was Taquitos ($7.40) which is deep-fried tortillas stuffed with seasoned chicken. Again, our appetizer was fresh out of the deep fryer because it was still piping hot and the chicken was flavourful. It came with a little scoop of guacamole,  I can’t say it did much to add to the taste of the chicken, but I do like my guacamole! 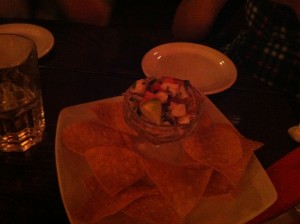 Our third appetizer was the Ceviche ($6.99) which is white fish marinated in lime juice, tomatoes, onions, cilantro, olives, jalapeno peppers and served with tortilla chips. If you’ve never had tomatoes, onions and cilantro mixed before – it is a fresh and delicious taste. I couldn’t honestly tell if there was much fish in this seeing that the portion was so small. I’m hazarding a guess and saying that Adrian ordered the Quesadilla. 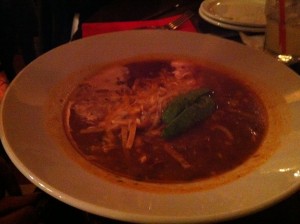 Nathalie ordered the Tortilla Soup, which I got to try a little bit of – not too bad but she did pose a good question, “Where are the tortillas?” 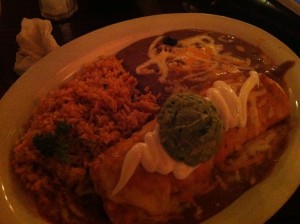 This is another friend of mine’s dish, I’m not entirely sure what she had but we had a giggle over the fact she was looking for her beans and how shocked she was to see them pureed like that. 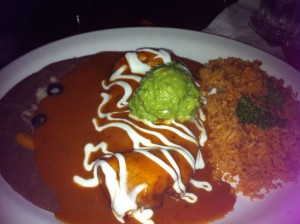 I ordered the Chimichanga, I did because I wanted to compare it to the last time I had Mexican food (sadly in a Honolulu Food Court – but it was damn good!).

I have to be honest, I really don’t feel that Mexican food looks very appetizing, it just seems like it’s been plopped on my plate and drowning in itself.

My Chimichanga (which I love saying, I’m actually saying it outloud as I type this review) had ground beef in it which was very hearty. I couldn’t really tell that the giant burrito had been deep fried since it was slathered in amarilla sauce. What really helped with the flavour was the guacamole on top of it. 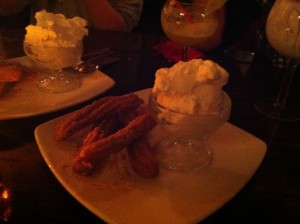 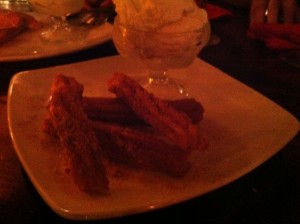 For desserts we ordered two orders of Churros. Which are my absolute favourite Mexican dessert. If you’ve never had it before, you must! It’s deep-fried batter covered in cinnamon and sugar. It was served with some vanilla ice cream on the side. It was too bad that the churros were so small, I’m used to those huge ones we used to get when we were down in the states. And what Mexican-BCIT-Reunion-Fiesta would this be if we didn’t have a couple rounds of Tequila? 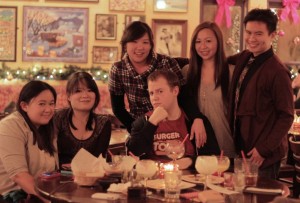 (Lovely catching up with you guys!! Photo by Nathalie de los Santos)

While not the best Mexican food I’ve ever had, it’s probably better than food court Mexican fare and there’s more selection than your local taco joint.

Our server was fantastic, but I wish we didn’t have to wait for an hour for our table.

For what it is – Rice and Beans mostly, I really don’t think paying $12+ for a meal is right. But since this is on West 4th and there aren’t many other competing Mexican restaurants, they are able to charge this premium price.

Definitely a Mexican feel with dimly lit yellowy lights and random pictures and memorabilia on the wall. 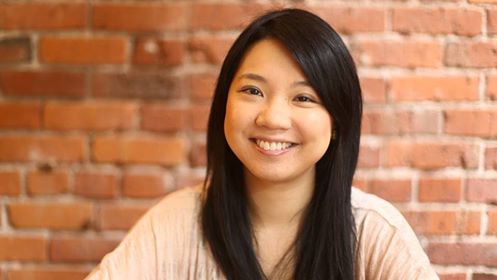