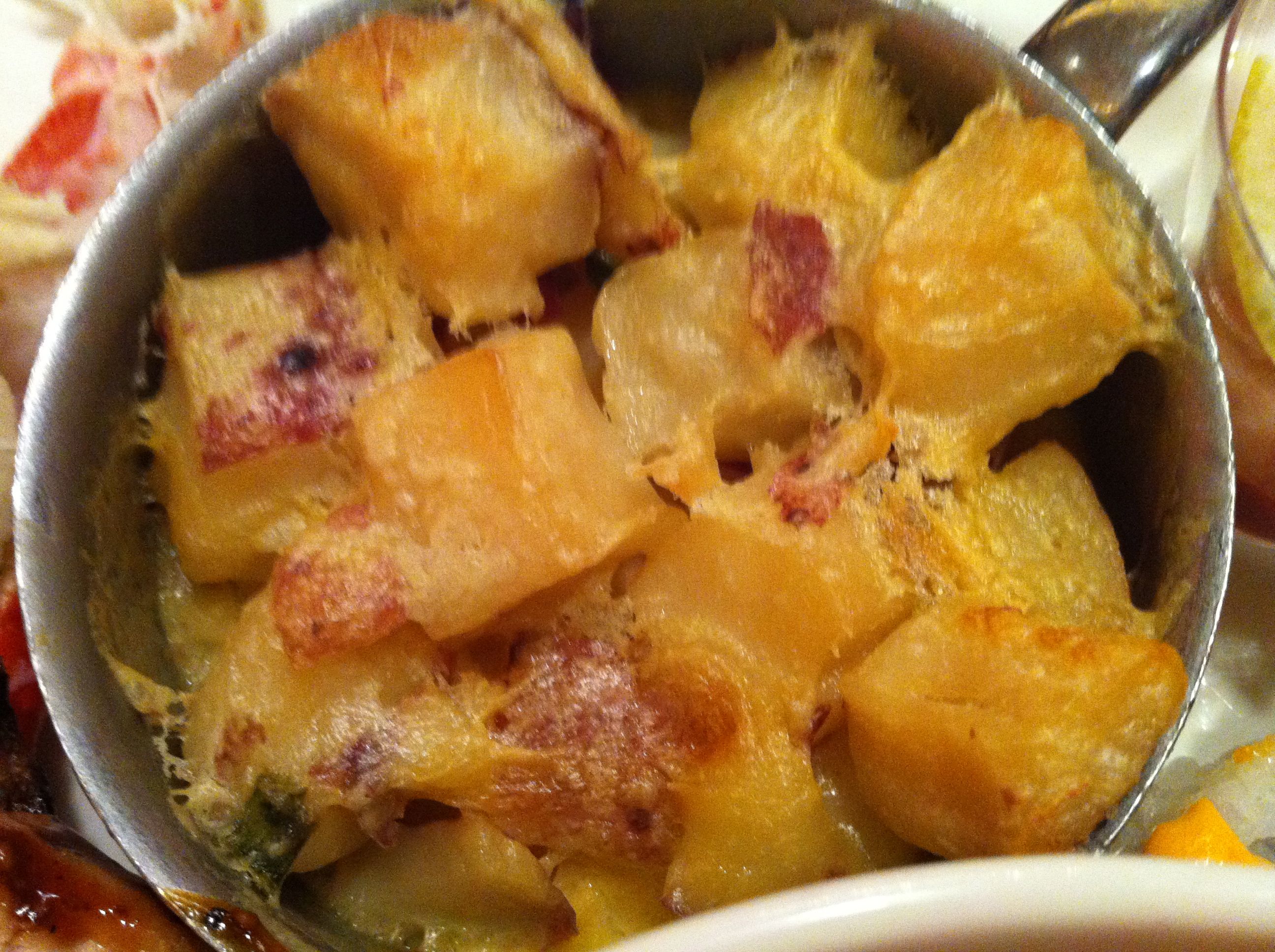 Holy moly, I accidentally let this one slip for a while! We were there back in October, if you’re looking for a more gourmet buffet in Las Vegas – this is it. 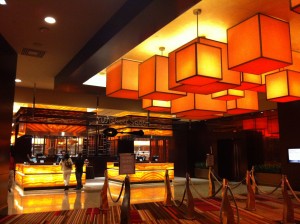 The design of the buffet is obviously modern and gorgeous – an orangey black with straight lines and different textures. 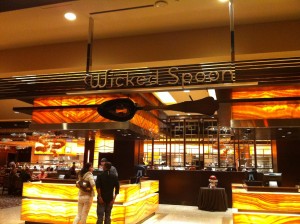 If you’re looking for the buffet, it’s upstairs at the very back of the hotel. We did a bit of a spiral looking for it! Everything in Las Vegas is lush and over the top and the Cosmopolitan is no different. 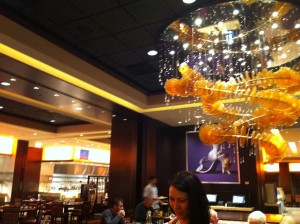 The dining area has this wonderful chandelier which is almost indescribable, so it’s a good thing I took a picture! Crazy.

We were probably one of the last people to come to the buffet since they were closing in about an hour, but there was still plenty of food left over! 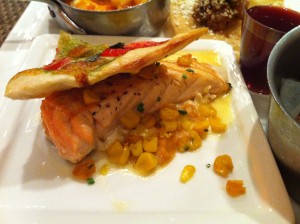 My first dish was flatbread pizza with pesto, red pepper and cheese. The selection of the pizza here is more gourmet like I mentioned – not your traditional pepperoni and cheese. I also tried the salmon with creamed corn sauce – the fish was a bit dry but I’m thinking it’s because it was the end of the night. 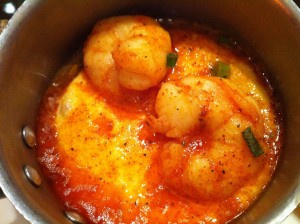 They have these little pots of different food and the one I picked up was prawn jambalaya. It was a spicy cheese sauce and the prawns were a good size and was coated well in the spices. 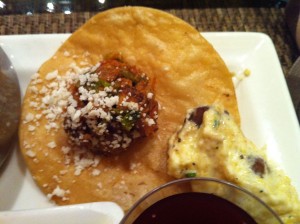 My next dish had a deep-fried tortilla and braised pork. I didn’t like this dish too much because it was pretty flavourless. It was strange because I found the pork here and at the Wynn not that appetizing.

They had spicy, pepper cracked chicken wings. These wings are massive – where do these places get such huge wings? Anyway, this was a great dish. 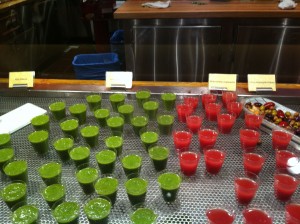 My next ‘dish’ was Watermelon Gazpacho. Gazpacho is a traditionally Spanish soup that’s served cold during the summer and made mostly from tomatoes. This was quite the interesting experience of fusing watermelon sweetness and a little bit of the tomato tartness. The next lil pot was Truffle Potato Gratin. This was by far one of the best dishes I had there. The truffle taste was soaked into the potato gratin and the cheese was magnificent. I’m hungry again just looking at the picture. They also had spicy salmon sushi which were conveniently smaller than normal, (which is good for buffets) and also shrimp in cocktail sauce in a shooter glass. 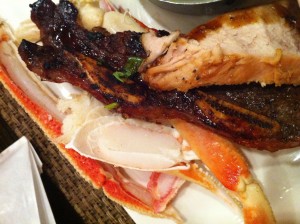 Besides the gratin was Korean Short Ribs, Sake Soaked Turkey with black pepper glaze and Alaskan King Crab. So, when I went over to get some AKC, the chef standing there handing it out asked me if I wanted some – I said, maybe just one and he picked up a whole pile and dumped it on my plate! I said, “Oh that’s good, thats good thank you!!” and I also embarrassingly asked for vinegar because I prefer having AKC or any kind of crab with it instead of butter. The Korean short ribs were okay, but nothing you can’t have here. The Sake soaked turkey was pretty tender and had a little hint of sake flavour. 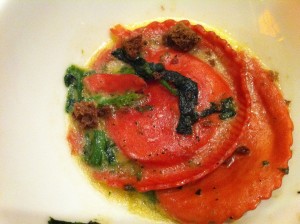 One of my favourite dishes has got to be butternut squash ravioli. Here it’s served in lobster broth and pumpernickel croutons. Unfortunately, I didn’t really feel like this was done right – maybe because it was the end of the night and it wasn’t fresh or maybe because I didn’t enjoy the broth so much. My best friend had some bone marrow – I don’t personally eat it but she said it wasn’t so bad. 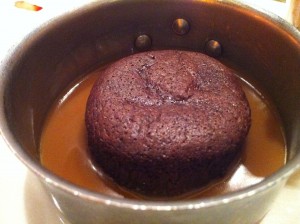 The desserts are probably my favourite area of buffets – but I think that the Wynn and Treasure Island has a better spread of desserts. I had a tiramisu slice, chocolate mousse in a chocolate cup, the fixings of a build-your-own strawberry shortcake, a brownie drowning in caramel sauce and tiramisu gelato in a shot glass. I didn’t find anything too spectacular, I think my favourite would have to be the chocolate brownie in the caramel sauce because it was very decadent.

I appreciate the Wicked Spoon’s buffet for being more creative than most other buffets and I think the food mostly was phenomenal. Of all the buffets I had at Vegas, I would say this one is my favourite (with Treasure Island’s dessert buffet area being very close!).

I’m a little sad I didn’t get to try their famous mac and cheese bar where you can make your own mac and cheese!! Maybe next time?

Check out their hours and prices here. 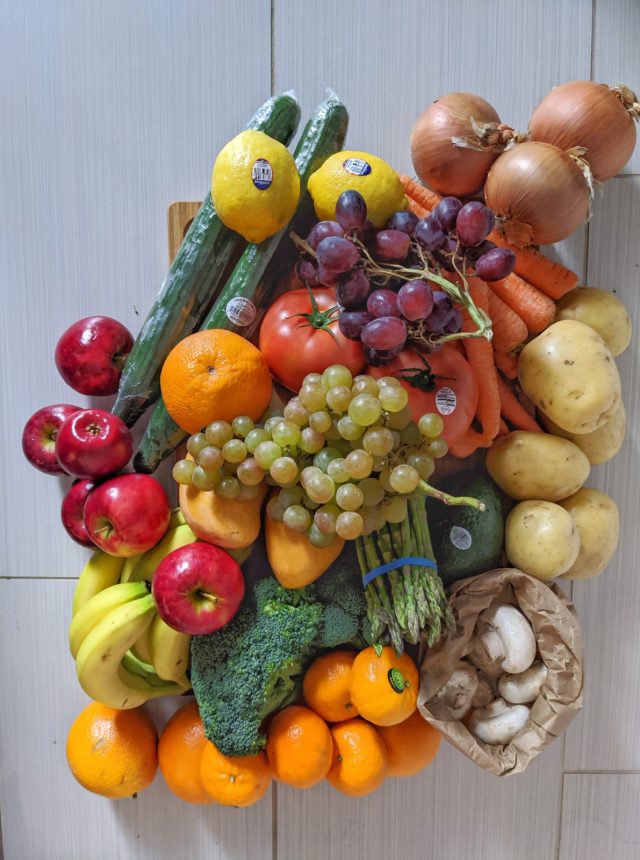 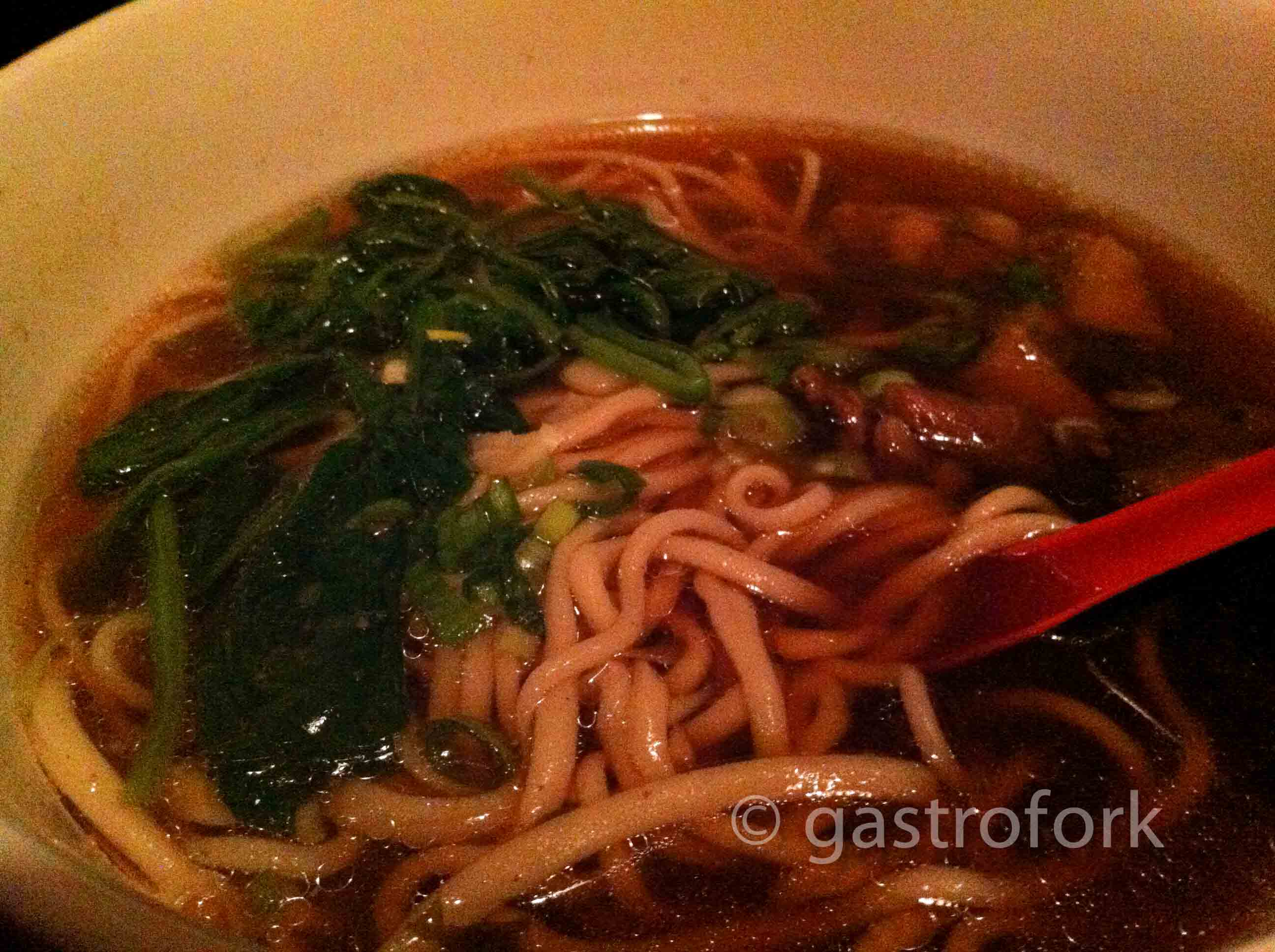