Ah the summer night market. I remember when it used to be in the Lansdowne parking lot and had maybe a handful of food stalls. It has changed and evolved into one of the most popular events during the summer time. It’s a shame that I don’t come here as often as I used to – but I feel like back in the day (yep, I’m going retro on you right now) most of the food stalls they had were serving things that were difficult to find in Vancouver. But since our city has grown into a remarkable foodie city, many of these dishes can be found in restaurants across town. 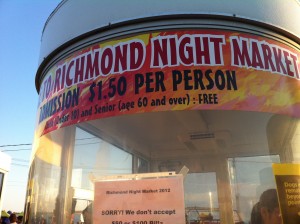 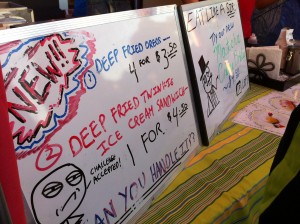 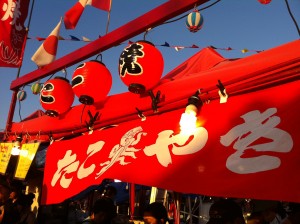 I have to say I’m always down for certain things at the night market. This includes: takoyaki, red bean fish-shaped cakes and bubble tea. Strangely, I didn’t get any of these this time – save the bubble tea.

This night market is much bigger than the other night markets I’ve been to, with about three rows dedicated to food. A foodie heaven. 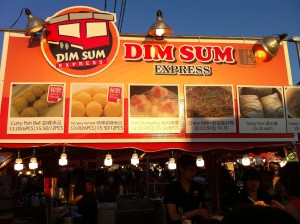 Our first order of business was getting some dim sum. When we walked right into the food area, Dim Sum Express was there to greet us. 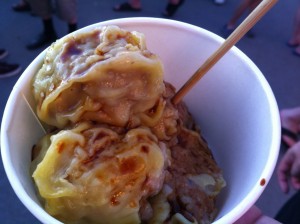 We ordered curried fish balls ($3.50) and siu mai ($3.50 for 4 pieces). The siu mai is big at this stall and was fairly tasty! The curried fish ball is spicy but not spicy enough that you would have to get a drink. 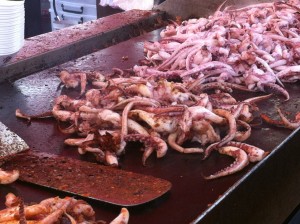 Up next, we saw a huge line leading to…tentacles? We had to see what the rage was behind this – and we watched this guy pour ridiculous amounts of tentacles onto the grill. I have never seen that many tentacles all at one time in one place.

Our tentacles were grilled deliciously and slightly spiced (as we asked). He gives you a heaping portion – but I would hope they always do for $6. 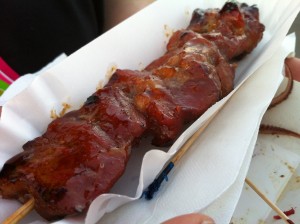 There are 2 Filipino stands too here, and of course being curious, I just HAD to try it out! At least this one anyway. The best way to judge Filipino food in my opinion is to try the lumpia (egg roll) and pancit (noodles). However, their BBQ looked so delicious, I had to overlook those two and go straight to the BBQ. This monstrous $3 BBQ was so good. If you’ve never had Filipino BBQ, let me tell you that it varies greatly, but is mostly sweet and tender- which this one was! 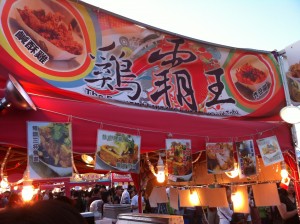 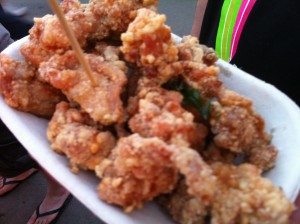 Another one of my favourite stands is this one (darn, I can’t see what the English part says) and the lure of popcorn chicken – (read deep fried goodness). This Basil Popcorn Chicken is $5 and is a modest portion. It’s extremely well seasoned and I would have to say this is one of the highlights of my foodie adventure that evening. 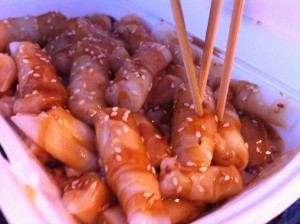 The next dim sum stop was at this one (I think it says Po Wah Dim Sum). We ordered Ha Gau (Shrimp Dumpling). It was pretty good. 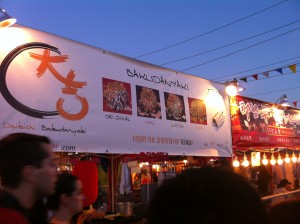 We made another turn and I found Bakudanyaki – which used to be one of my favourite haunts (and one of the first food trucks in Vancouver/Richmond). It looks like the owner sold the business and they have rebranded to “Daikichi Bakudanyaki”. Bakudanyaki is basically a giant takoyaki ball ($7). There’s cabbage, shrimp, octopus, etc inside and they flavour the outside with several different sauces. My favourite is Wasabi and Curry. The ex-owner of this shop was so nice, but it’s good to see him move on (he also had a great udon food truck set up right next to this one). Anyway, for nostalgia’s sake, I had to order one. Although it came in the familiar take out box, it just didn’t feel or taste the same. I’m wondering if it’s mostly because the volume they do at the night market compared to when it was a random food truck in the middle of Richmond. The taste is still good, but the portion is smaller and the presentation seemed less important. Nonetheless, I still very much enjoyed it and I hope that they will be able to find a place to open up business after the night market and fine tune the taste.

Another favourite night market staple is hurricane potatoes. However, this is half the line to it, and I did not want to wait an entire lifetime for them. Perhaps next time! Another gem that you must visit is this particular bubble tea stall. A JUMBO sized bubble tea is $5. I’m talking HUGE. 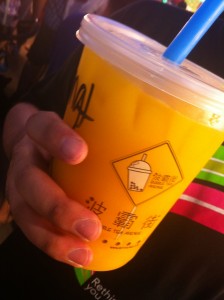 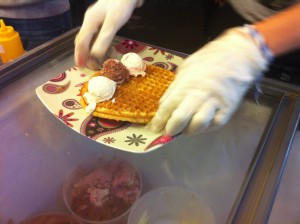 Up next is this Ice Cream Waffle stand, $3 for three different flavours of ice cream in a waffle. Sounds pretty awesome. The waffle is a very cute dessert and is wide and thinner than most waffles, but this is perfect for the amount of ice cream they put into it. I didn’t get to try this, but Brian said it was good. By the way, they were awesome sports for letting me take pictures while they were making their waffles! I usually have to be sneaky about it, but they were completely fine with it! We also had to get mini donuts while we were there, $4 for a dozen. They were deliciously sugary and piping hot. Finally, Brian ordered a Freshly Squeezed Lemonade drink. The regular size is $4 and it’s quite good, it’s not too sour and very refreshing.

Overall, the night market experience is fun and it’s a great way to experience different foods all in one area. If you like haggling and buying things as well, you might enjoy this too here. I can’t say I’d come here as often as I’d like because between Brian and myself we spent about $100 on food, but nonetheless it was a lot of fun!