If you’re looking for a great meal opportunity that’s a good bang for your buck, you have to get on these VANEATS deals. I have to admit, I’m always surprised how filling these meals can actually be. This particular restaurant is no different. Please note that I was invited by the good fellas at VANEATS to preview this package but that any extra items was paid for by myself.

Whet is located right at the gates of Granville Island where the old Sammy J Peppers used to be. But that’s where similarities end. Whet uses fresh, local and sustainable ingredients in their menu. A lot of their ingredients are sourced from the Granville Island Market (from Oyama, la Baguette, Duso’s, market produce etc). 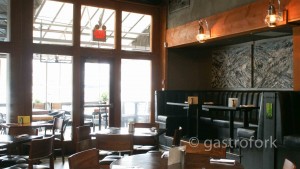 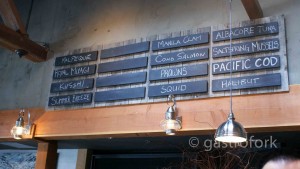 Today I brought Brian with me, since he had the day off, we decided to make a day at Granville Island. We were greeted warmly by our hostess and were seated promptly. I love the big, comfy booths they have. You cant complain about the view either, we were watching a great big Heron peck at himself while we were waiting for our food to arrive.

For the record, here is what #WheturAppetite includes: 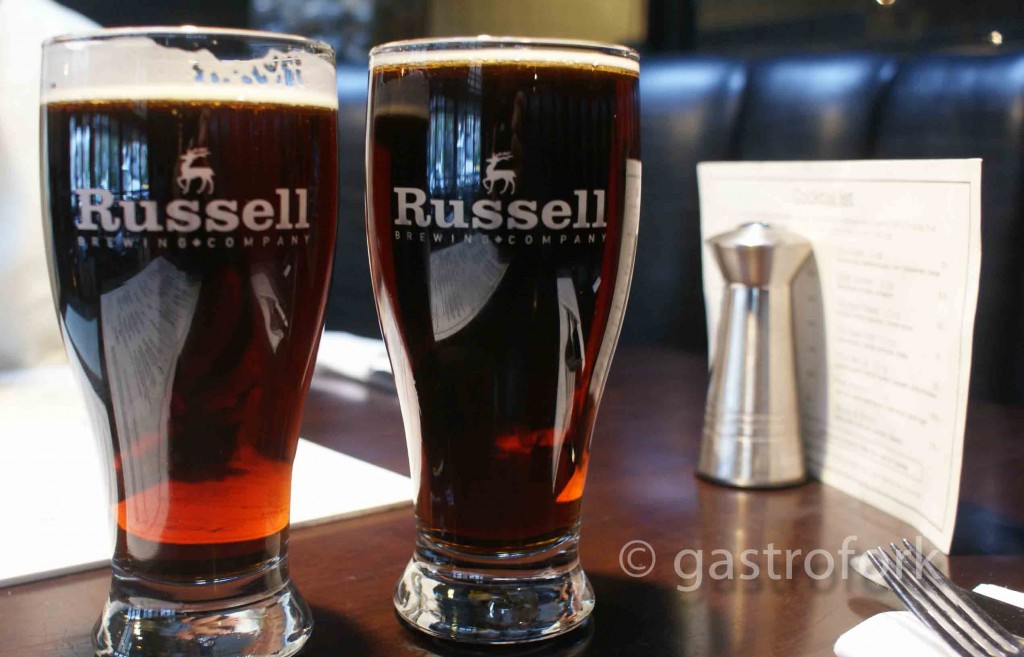 We started off promptly with the Angry Scotch Ale by the Russell Brewing Company. I can’t say I’m a big beer afficionado, but I do enjoy a good glass here and there. I really liked this kind of beer, it wasn’t too bitter and had a great taste of malt (which I love). I always think that dark beers = bitter beer, but I was pleasantly surprised by this one. Two beers with a meal is pretty awesome, so Brian and I had our own…at 1pm in the afternoon. Well, it’s 5 o’clock somewhere, right? 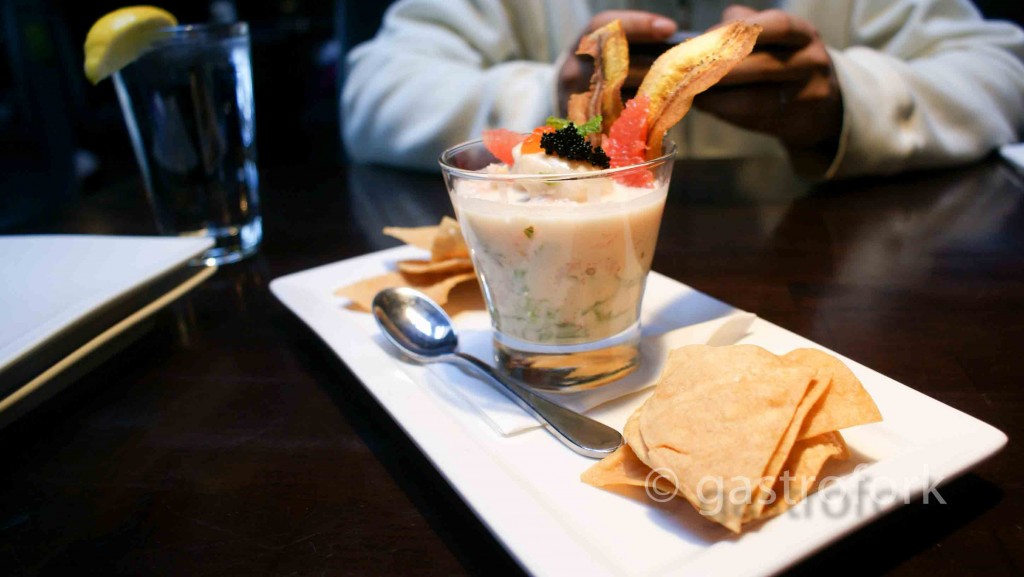 Next up we had the Coconut Scallop Ceviche. In this concoction is hand peeled shrimp, citrus juices, ginger, jalapenos, corn chips, tobiko and ikura. This amazing little cocktail was very refreshing. 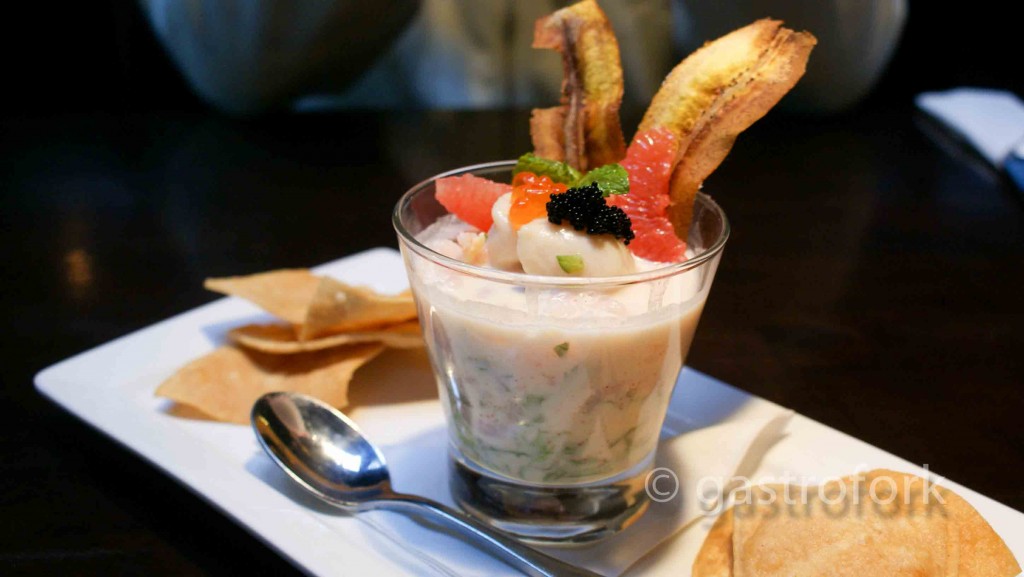 It was perfectly balanced, not too creamy and not too citrus-y. Brian really enjoyed the shrimp and scallop in this dish and I really like the elements of citrus (including grapefruit) incorporated into the ceviche. Brian is also a huge fan of ikura and tobiko so it was just right up his alley. 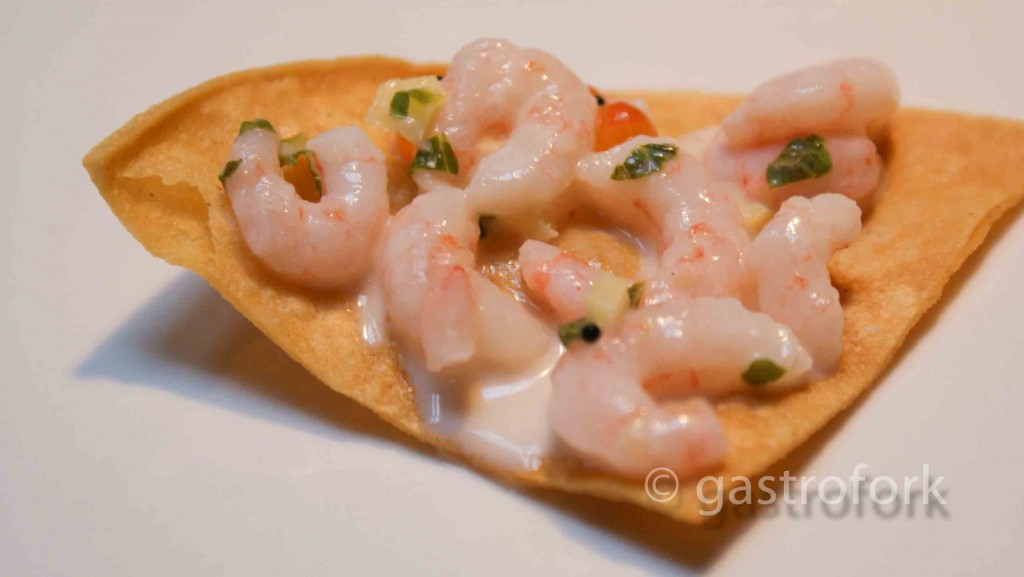 Here’s what the shrimp and a lil ikura looked like on their house made tortilla chips. 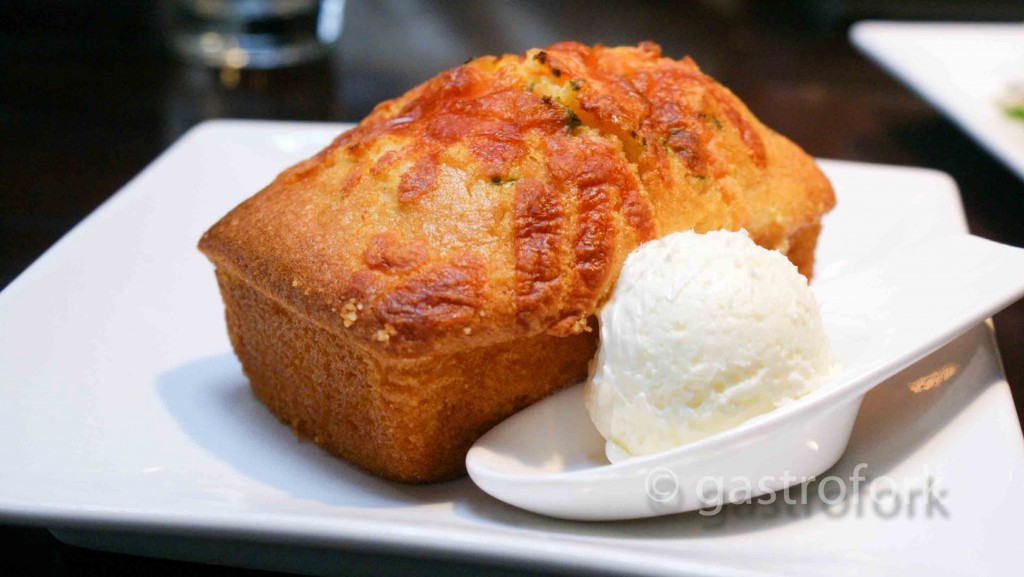 Up next was a side order – it was recommended to us to try the Jalapeno Cornbread and I am so glad we did! This heavy, little cornbread is the best cornbread I’ve had here in Canada. It’s dense, buttery and moist. I wanted to order another one but restrained myself! Raashil, the GM of Whet informed us that they would be making modifications to the recipe so that there would be more cheese and jalapeno in the cornbread rather than just on the top. I might just have to come back and try it again. I’d definitely recommend this as a side to the VANEATS package, especially if you’re a lightweight when it comes to drinking beer like me!

Back to the review, our next appetizer was the Prawn, Shrimp and Wild Mushroom Salad. Three of my favourite things mixed into a bed of arugula, grapefruit, taro chips in a lemon-hazelnut vinagrette. This was the item I was looking forward to in anticipation of the preview and it didn’t disappoint.

The flavours mixed perfectly – the shrimp and prawn were refreshing and the mushrooms soaked in great flavour. The citrus in the salad cut the ‘heavier’ taste and made the salad very refreshing.

Finally the main course. Brian and I decided to get one of each (which you can too, adding one dish will cost $15 extra). 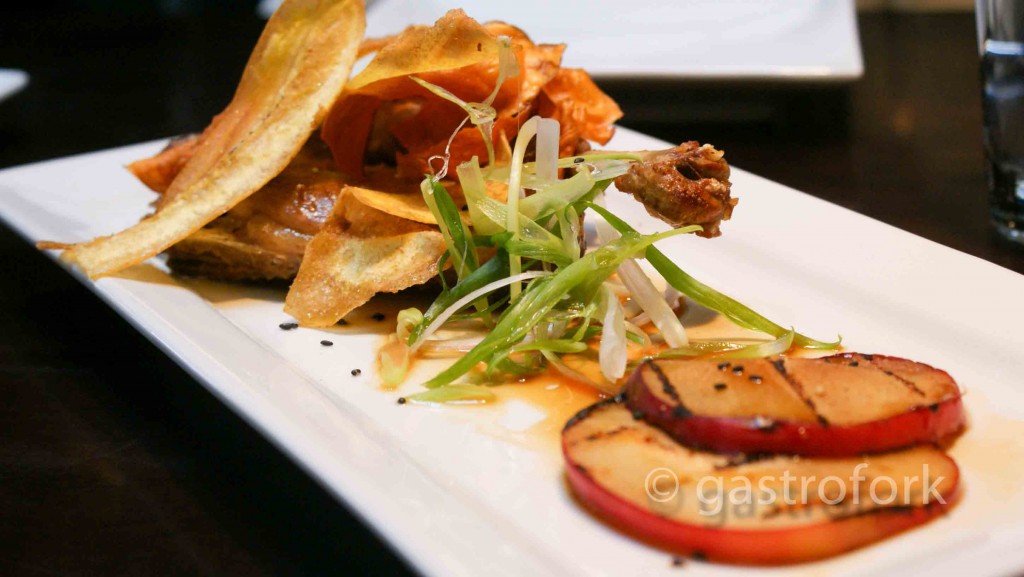 Both arrived at the same time. But let’s start off the the Crispy Duck Leg. I don’t know where they got this leg from (well, apparently it’s a Confit of Fraser Valley duck leg) but this is a big duck leg. I might have to call to see if Donald Duck is missing a leg, it was that big. I can’t say I’m a big fan of duck, the only time I have it is probably in Chinese cuisine but this was a great way to have it. I suggest cutting up the grilled plums served alongside the duck and eating it with the duck on the fork. It balances the flavour and leaves this clean, refreshing taste on your palate. It’s served with a lot of yam and plantain chips which I saved to munch on in the end. 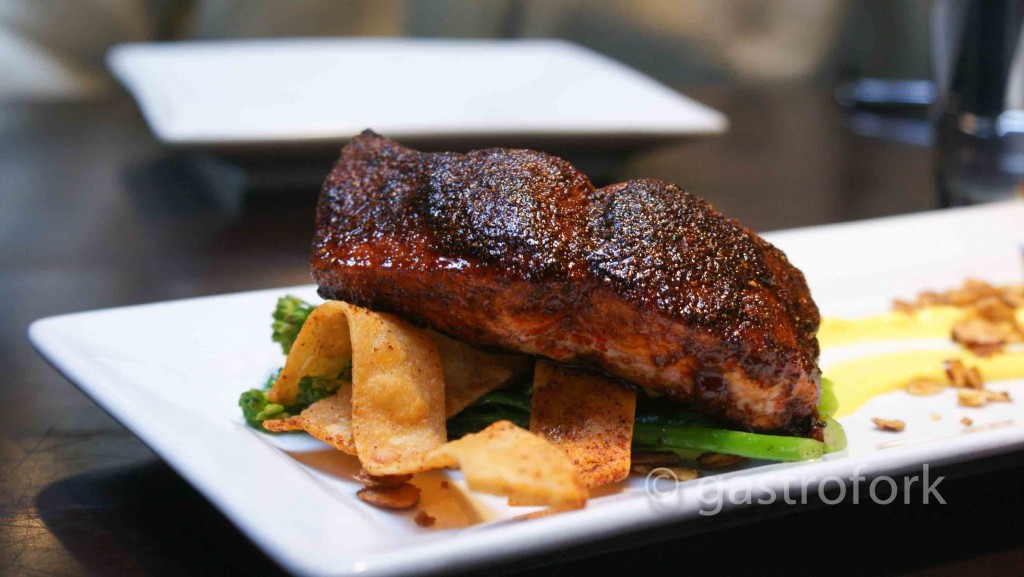 The second choice is the Red Honey-Curry Coho. Wow, where can I begin with this? This wild BC Coho is seriously covered in curry that you don’t even need the sauce provided (if you couldn’t tell from the picture).

However, you MUST sweep the salmon through the saffron yoghurt and add a little of the hot pickled lime puree and candied almonds because the flavours just explode in your mouth. I love the creativity that went into this menu – either option is a great choice and not your typical, run of the mill chicken or fish meal. 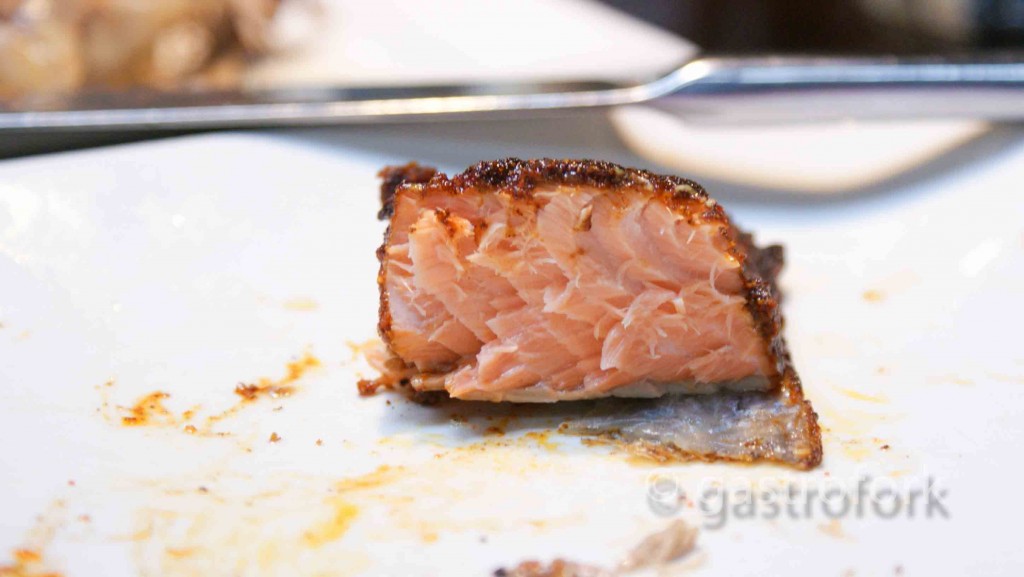 You can buy this package right now on the VANEATS website and use until January 17th, 2013. 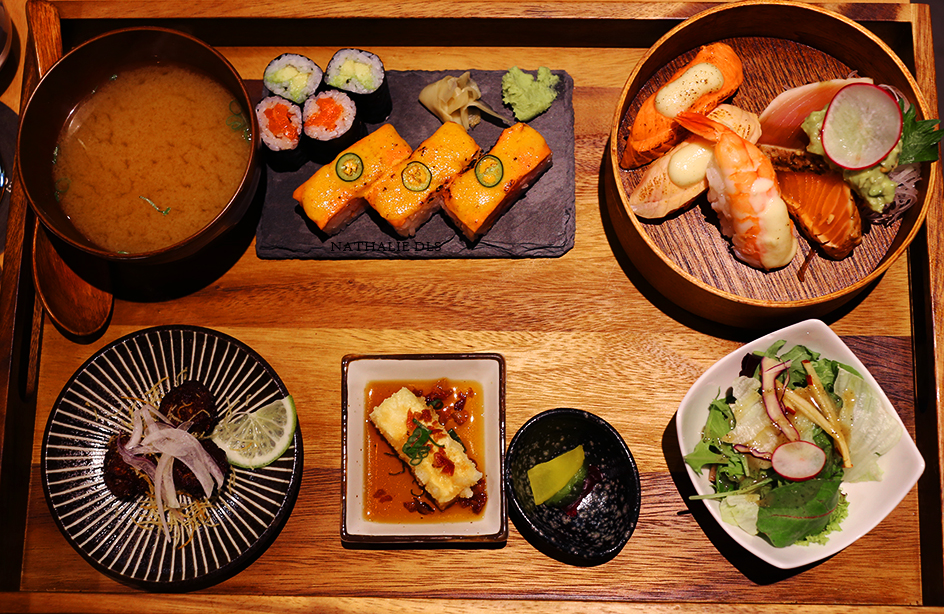 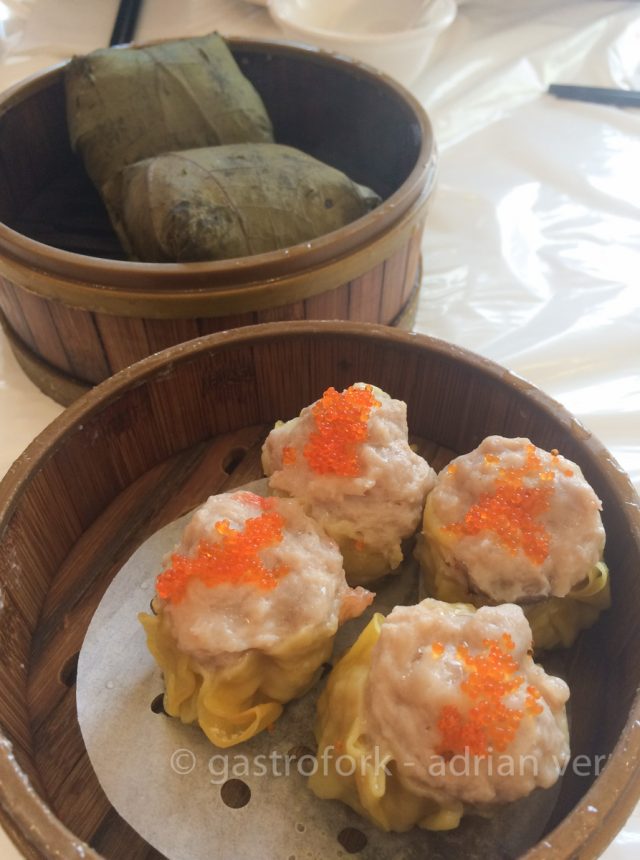 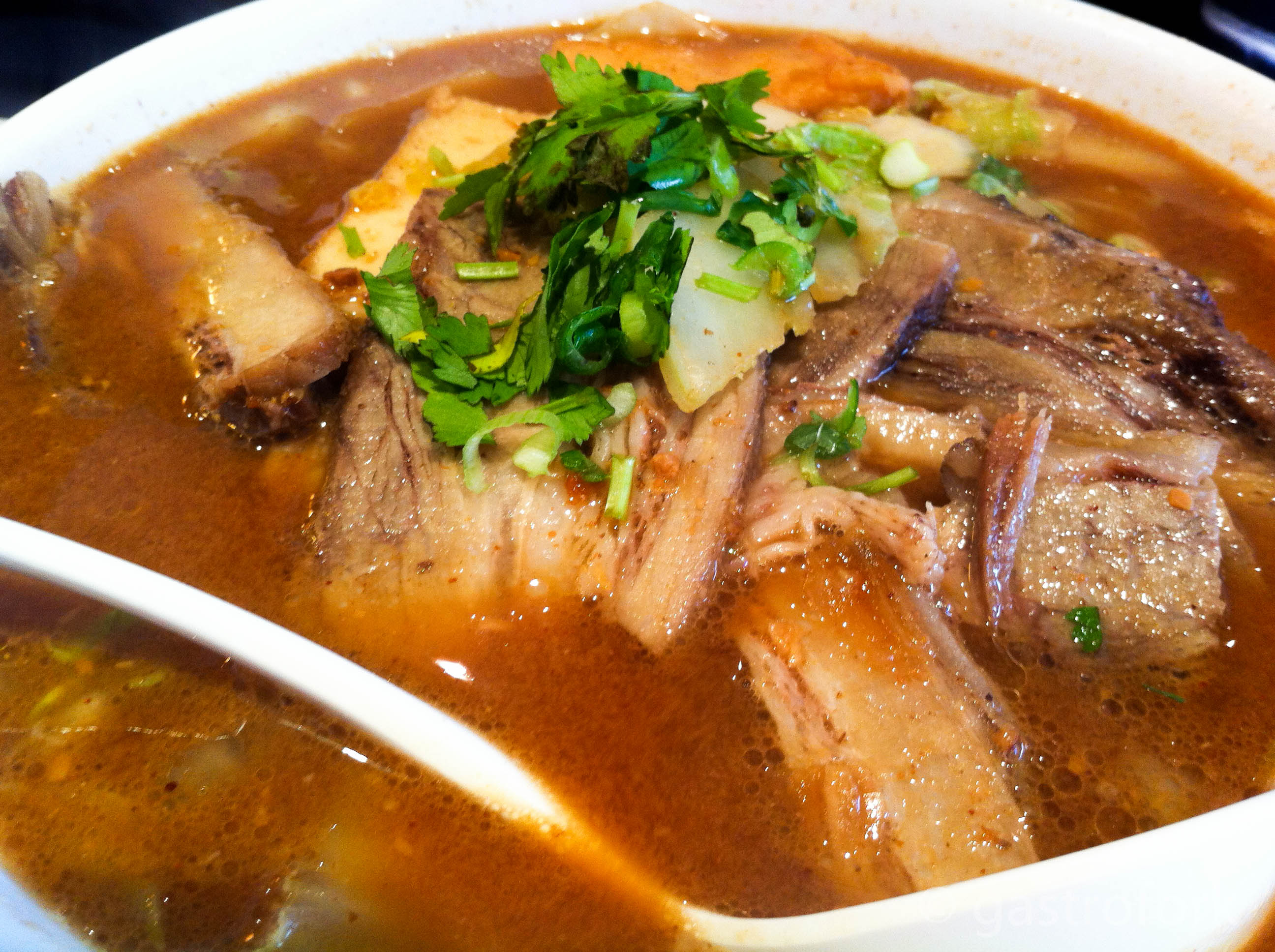 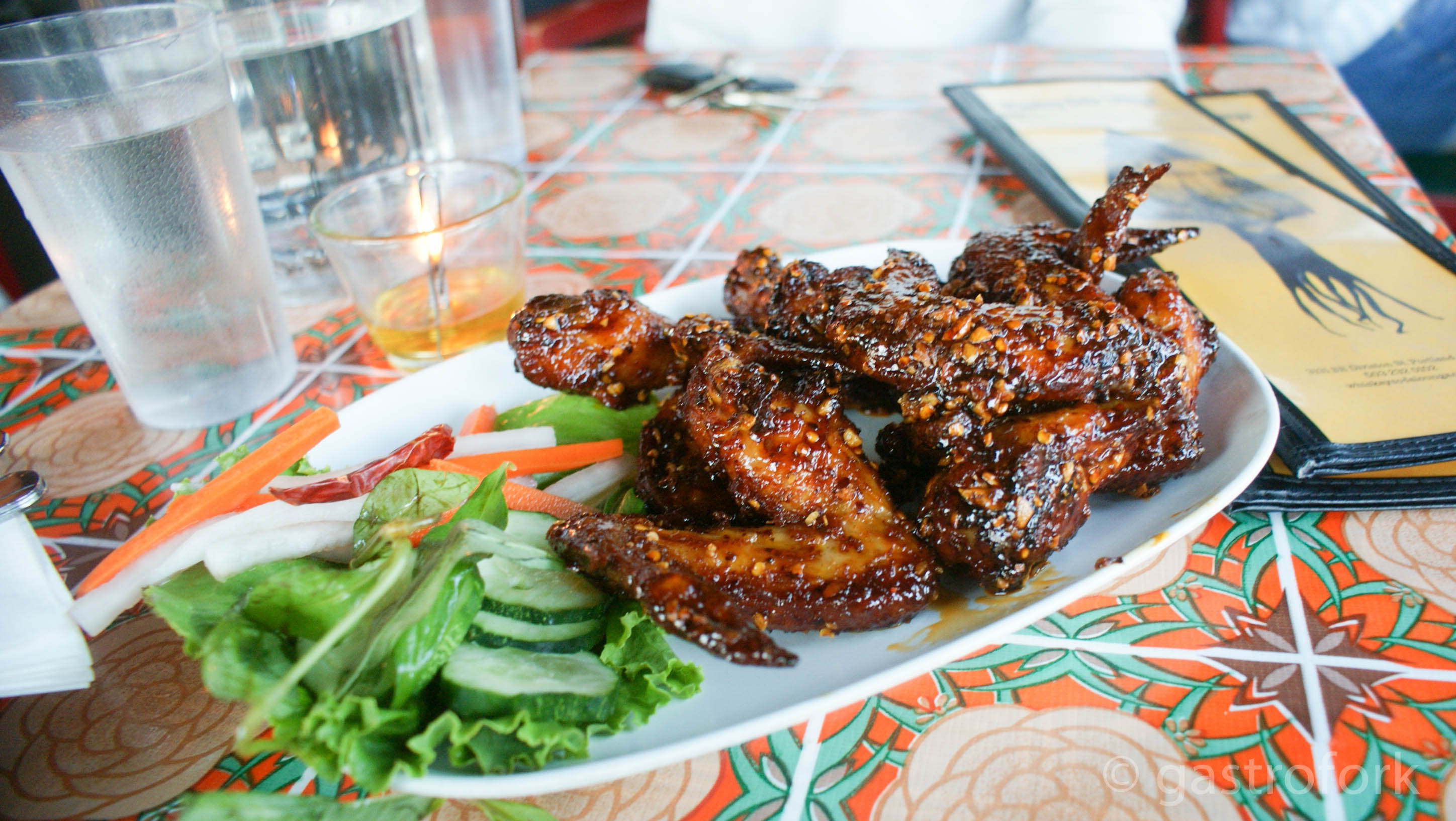