After touring the city for 3.5 hours without food, I was surrounded by hungry and mostly cranky travel companions. Being in the city centre obviously helps alleviate the situation because we were surrounded by restaurants. You know what doesn’t help? When the list of restaurants that I curated before the trip all end up being quite a bit of commute away. As much as I wanted to cross another one off my list, I had to be realistic. I decided that the best thing for us to do is just find a decent looking restaurant to satiate our hunger. As quickly as I thought of it, my eyes lock on a target.

“What an interesting facade…” I thought. It was late afternoon and we were starving so I made an executive decision. iBurger it is. 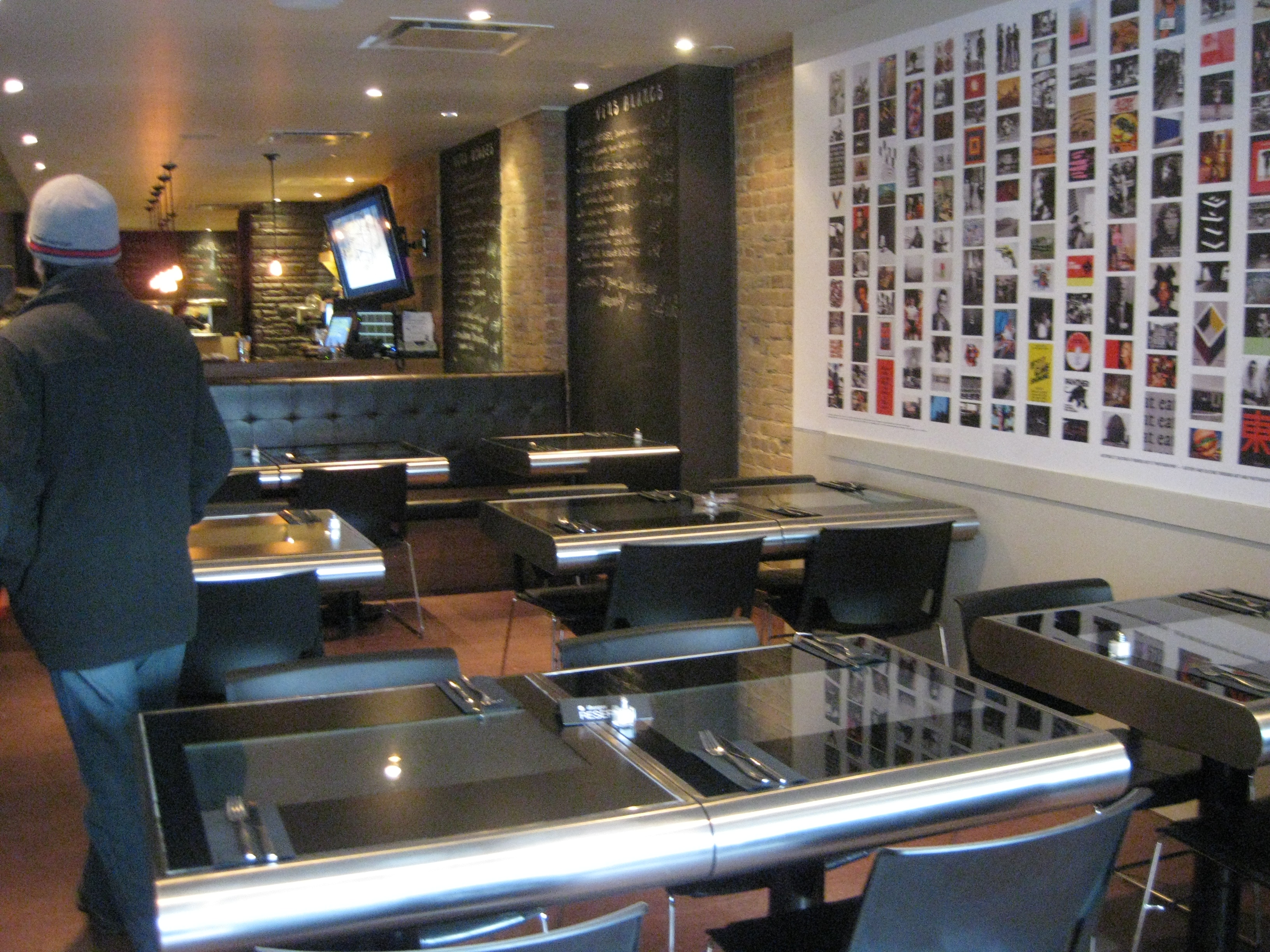 From the moment we stepped in, I knew this was more than just a burger joint. The modern and trendy design mixed with the brick wall really gave this restaurant a very Gastown vibe. I was also a fan of this: 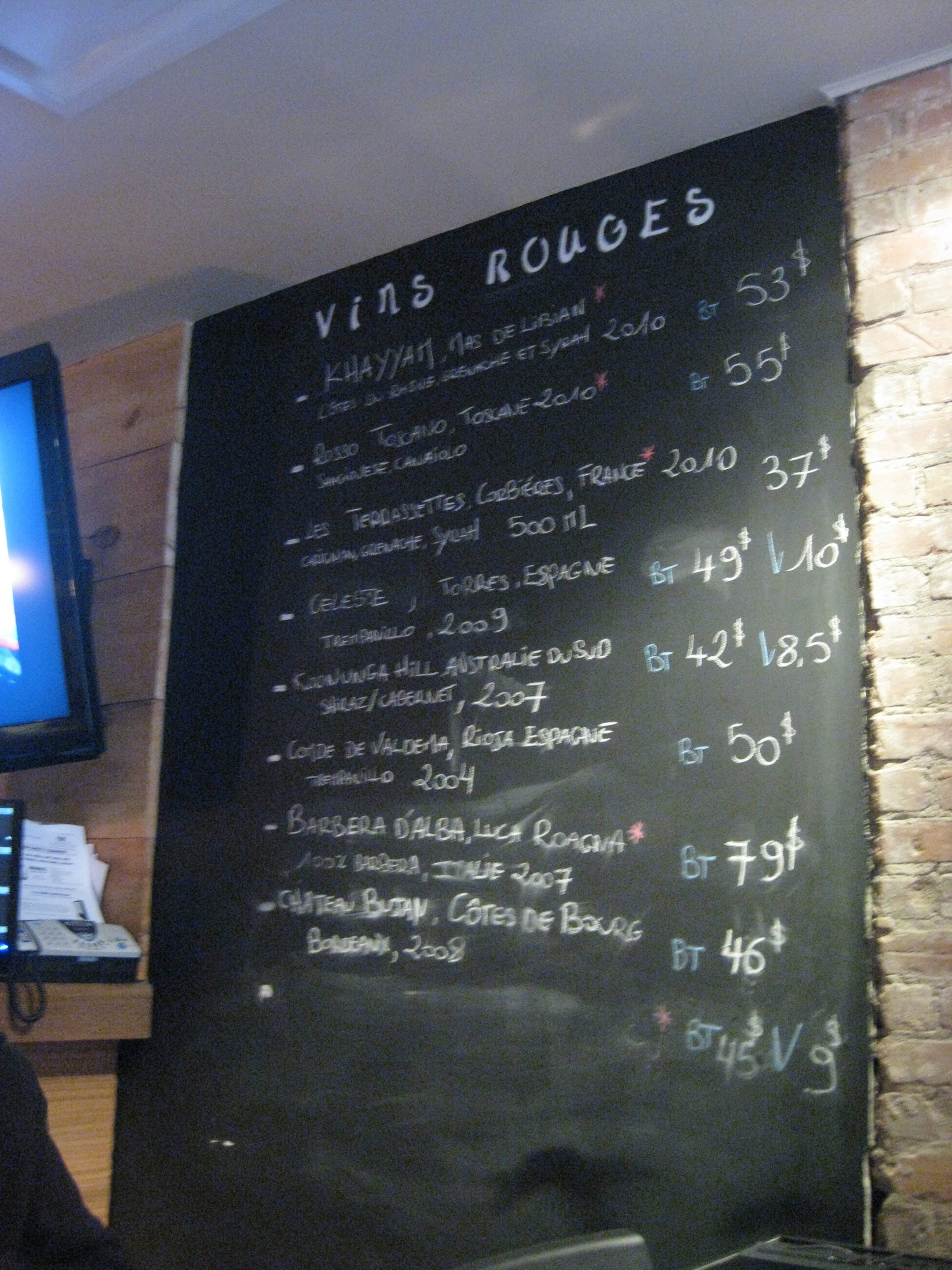 It’s nothing new, but I love this set up because it adds character to the both modern and rustic establishment.

With a restaurant name like theirs, I honestly thought we would be treated to free iPads to use while we dined. But sadly we weren’t. Thankfully, they had an engaging and interactive menu. We had a great time playing with that instead.

This computerized touchscreen menu was part of our table. It’s really straightforward and actually quite fun to fiddle with. You basically select which item you want to have, pick your choice of add-ons, and then hit order. A list of items you’ve ordered will come up so you can review it before sending the order to the kitchen. Once you’re done ordering everything you want, you hit Send Order and voila! Now all you do is wait for it to arrive.

If you’re not a fan of technology, you can choose to place your order by talking to one of the servers. Frankly, I’d rather play around with the menu than talk to someone because it’s not often I see something like this.

As I’m trying to reduce my alcohol consumption (don’t roll your eyes at me!), I was happy to find they had an array of mocktails. I ordered a Virgin Pina Colada; the only thing I didn’t like about this was that there was not enough! For $4.99, I was expecting to get at least another half cup of it. But I did love that it had the right amount of sweetness as well as a really great pineapple flavour. There was also very little blitzed ice, so it was nice and easy to drink.

Not an exciting starter, but I ordered the Calamari because I was expecting the burgers to be huge and I didn’t want to be too full from the appy. I actually like the fact that they didn’t use breadcrumbs with this dish. It still worked for me. It was not rubbery or chewy at all, and it wasn’t oily either. I thought it was quite light and fluffy.

I was a fan of having 2 different dipping sauces for this dish. The marinara sauce was light and was not overly spiced with herbs, which I appreciated a lot. The aioli was also tasty. There was a subtle kick that I thoroughly enjoyed.

Whenever I’m in an establishment I’ve never visited before, I always like trying the most standard item on the menu before I venture into something more ‘out there’. So I decided to get the AAA Angus Burger, extra grilled mushrooms, extra avocado with house fries and salad.

The patty itself did not disappoint; it was moist and juicy. The brioche bun was lightly grilled, giving a nice crisp when biting onto the gargantuan burger. The combination of fixins made for a terrific and hearty burger. I’m sure that even without my added customization of grilled mushrooms and avocado (added because I love the flavour of both!), the flavours would still be just as terrific.

My fries were nicely deep fried – not too oily and just perfectly crisp. The salad, however, had too much dressing for my liking. I prefer it to be lighter on the dressing, but it was still fantastic. 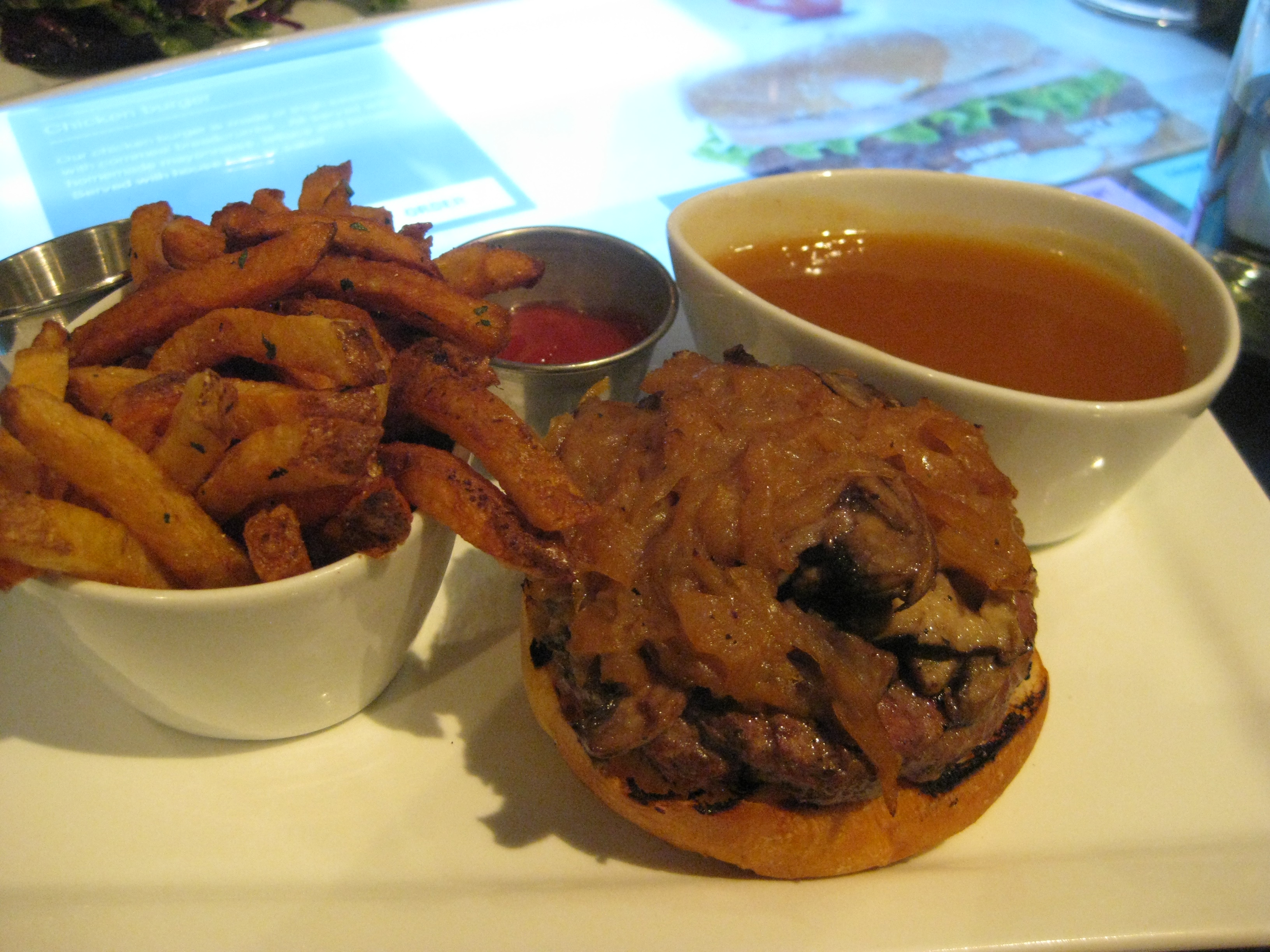 I was a huge fan of this Burger Steak! Before I even got to try it, I knew that the combination of caramelized onions, grilled mushrooms, ground beef, and BBQ sauce would guarantee my seal of approval. The beef was moist and cooked well, and the sweetness of the caramelized onions was a nice compliment to the meaty mushrooms. The presentation was also fun – serving it open faced was a quirky way of presenting it. 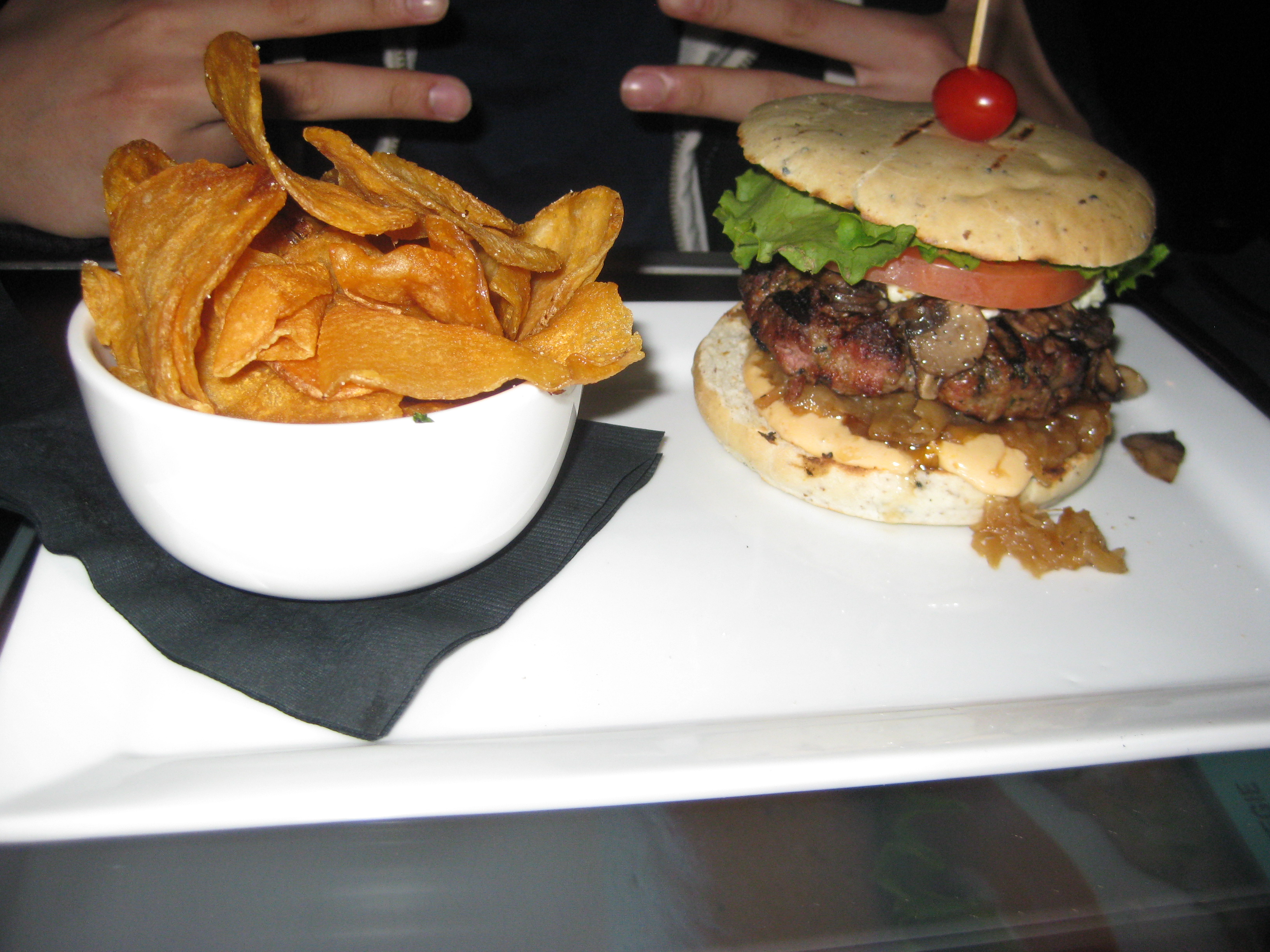 Lamb Burgers are never a first choice for me, so I was quite glad someone else ordered this dish so I could try it.

The lamb itself was cooked well; it was juicy and I liked how the blue cheese adds a dimension of flavour to the entire dish. The use of the onion seed bun was quite interesting – it made the lamb really stand out. As I mentioned I’m a huge fan of grilled mushrooms so I quite enjoyed the texture it added to the burger. The chips on the side were nice and crispy. It was the right amount of thickness for me.

Personally, this dish wasn’t my cup of tea. I’m not a fan of the pungent smell of lamb, but I do know to appreciate its taste. My brother was raving over it so he must have really loved it.

iBurger’s crème brûlée did not disappoint. Beneath the toasted layer of sugar was the smooth and delicate custard. It was both light and sweet, and the touch of fruits added a tart to each sweet bite. I thoroughly enjoyed this dessert.

This was no doubt my favourite dessert of the evening: Trio of ice cream. Flavours of that day included vanilla, chocolate, and caramel with some cookie crumbs underneath. First of all, I want to mention that the vanilla was to die for. I know for a fact they used real vanilla because I could see the tiny pods. Plus I could really taste the difference; artificial vanilla just doesn’t taste that good. The caramel crumble was another hit. It was rich but not overpowering. The cookie crumble underneath gave it a nice crunch without being too heavy, complimenting the caramel perfectly.

As you know I can’t eat chocolate (I know. Don’t even say anything) so I’ll just hazard a guess that the chocolate was just as heavenly as the other ice creams J 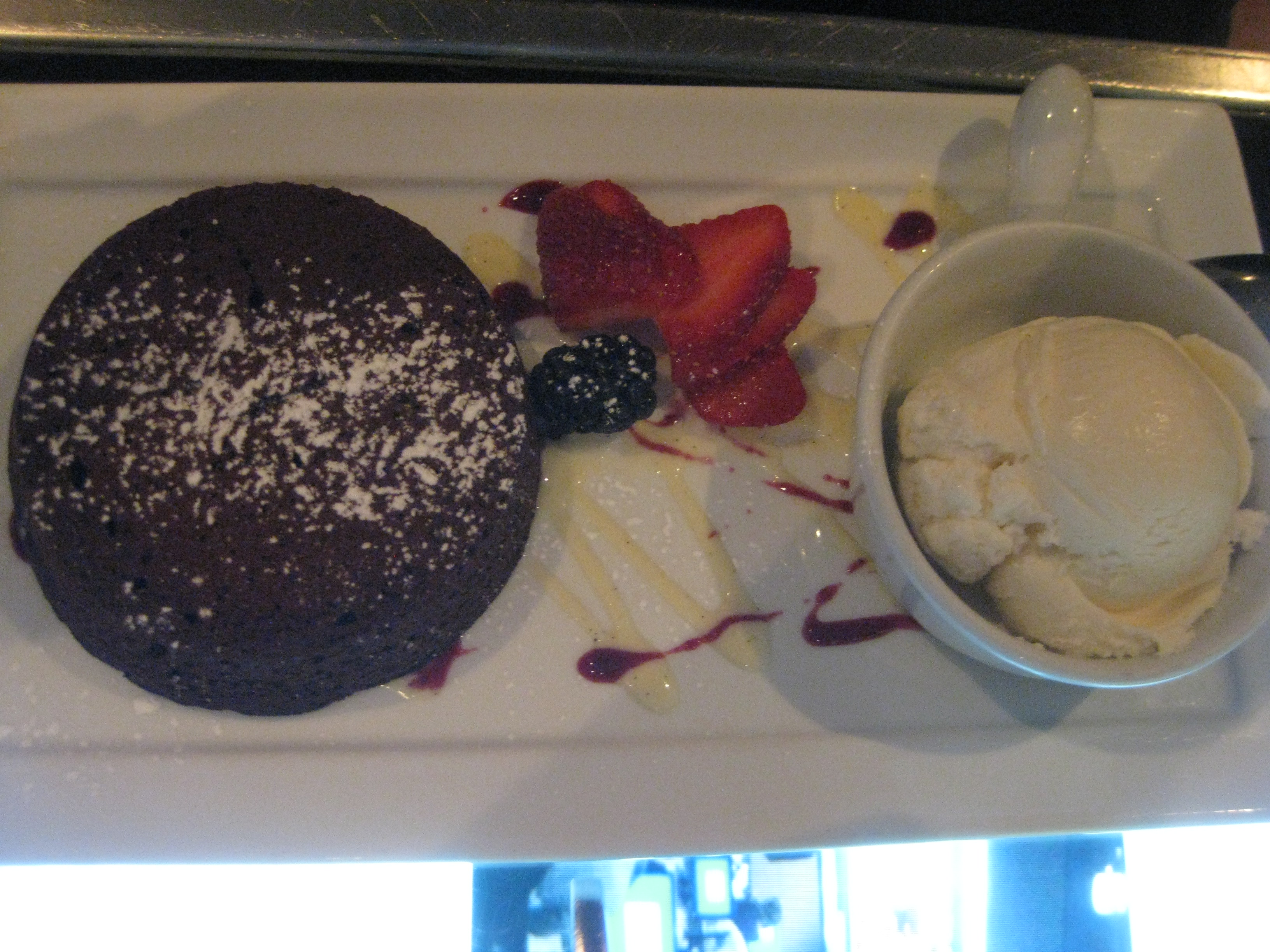 Sometimes plans don’t always work out. In this scenario, I’m glad it didn’t. I wouldn’t have discovered iBurger if I was too much of a stickler to my curated list.