On Friday evening, Chef Thomas Heinrich invited us to try the new Summer Menu at Mosaic Bar & Grille in the Hyatt Hotel downtown. Chef Thomas is known for his artistic take on dishes and his meticulous devotion to serving the best flavours possible.

This evening, I was joined by Diana (Foodology), Amy (Food Queen), Adrian and Jeremy (Food Gays), Sean (Sean’s Adventures in Flavour Town), Dennis and May (Pangcouver) and for once – my husband, Brian! 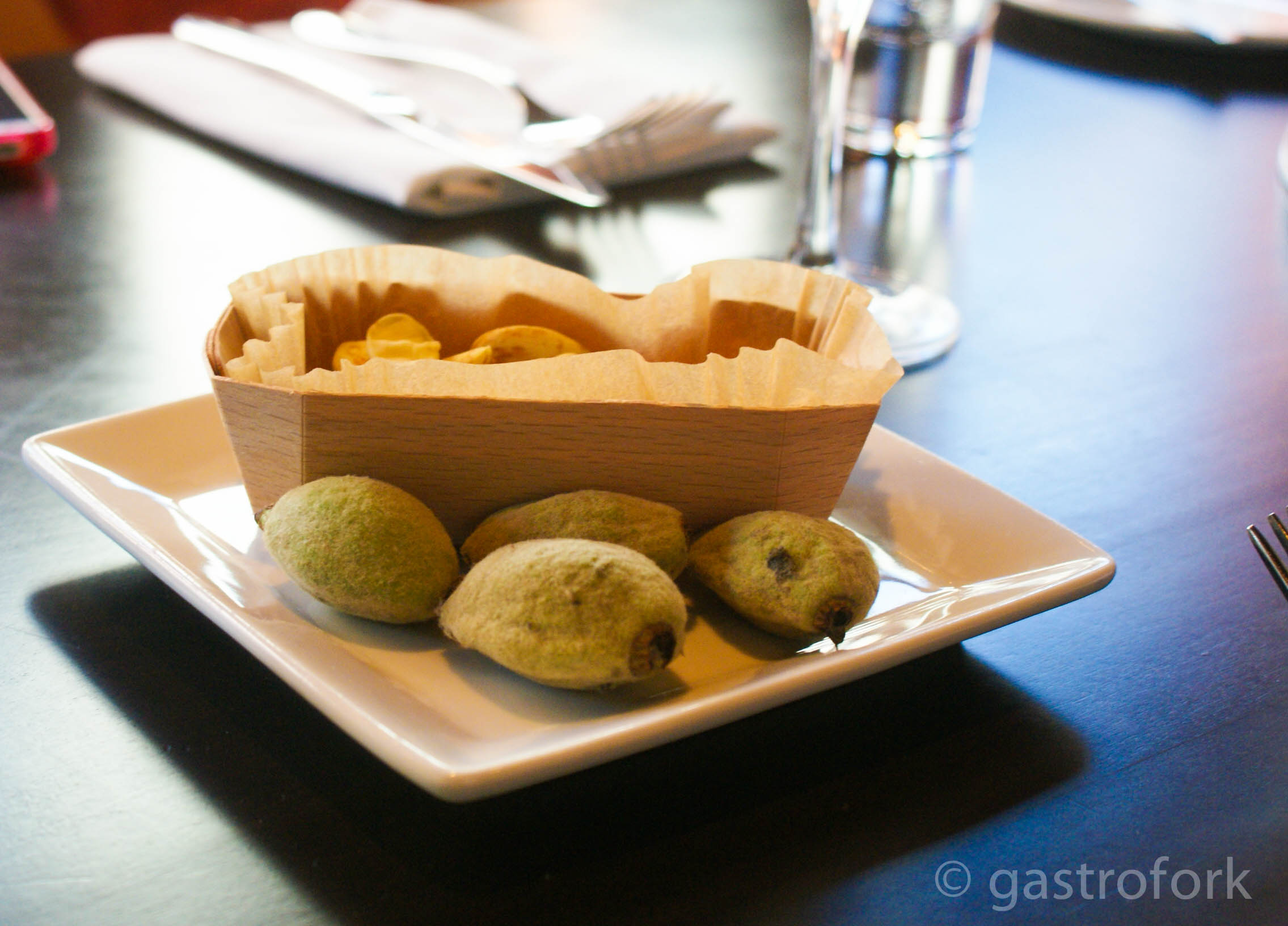 Chef Thomas came out with an interesting start to the meal – green walnuts. These fuzzy little walnuts when cracked has a firm (but edible) skin and slightly sweet taste in the middle. The walnut is meatier, I’d like to say closer to a chestnut, but with a light airy taste. 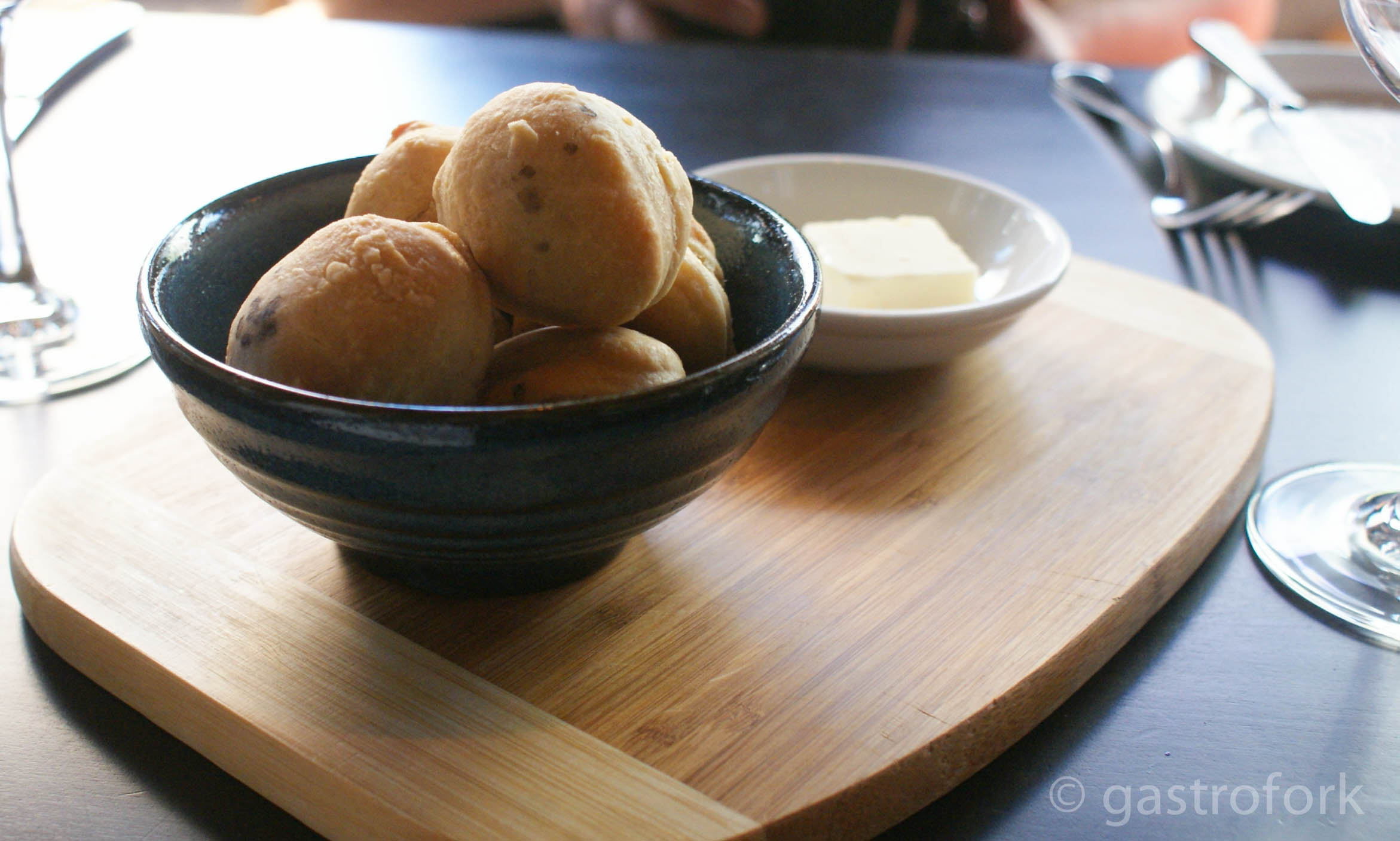 Next up we were served these great smoked biscuits. They were smaller than normal portions you would get at a restaurant, but jam packed with delicious, slightly smokey and buttery taste. I had a couple, they were so good.

The first dish to arrive was the Skuna Bay Salmon. This is the King Salmon, which was delivered fresh just that day. It’s served in a brine, squid ink, olive tapenade and served with lemon lime caviar and an interesting Ice Plant flown in from San Diego. The King Salmon had a nice buttery texture and fresh taste to it. The flavour is complimented well with the lemon and lime caviar that provide a clean and bright taste. The Ice Plant (the green plant to the right) was an interesting texture in the dish. It was crunchy on the outside much like you would expect in the vegetable but had a slightly sweet taste to it. Great pairing in this dish. 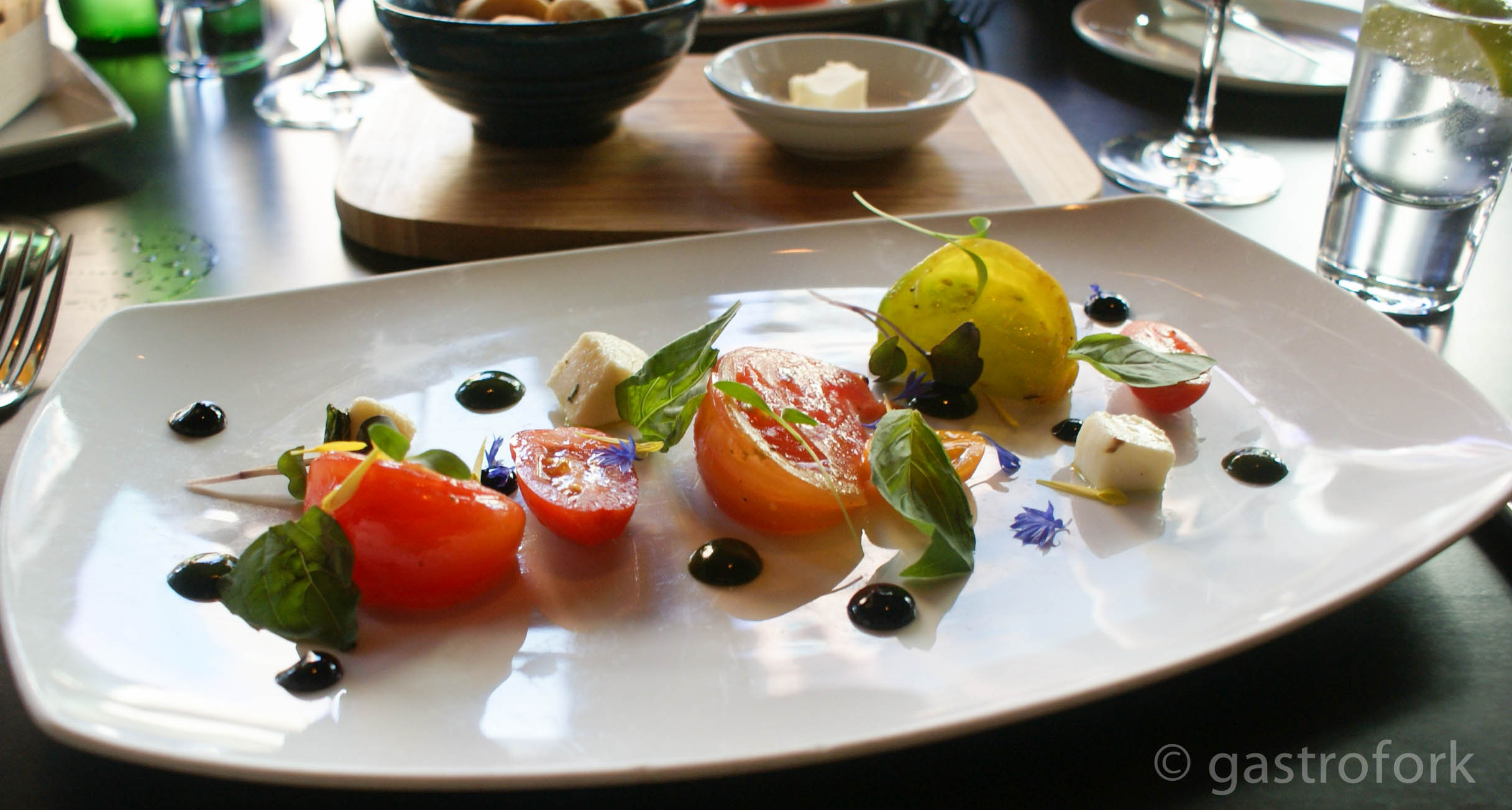 The next course was one of my favourites of the evening. GBE Farms Heirloom Tomatoes, Buffalo mozzarella served with a 12 year old balsamic reduction, basil fluid gel. The tomatoes are sous vide quickly (10 seconds) and infused with different flavours including onion and garlic. Think of it as a Caprese Salad. Every tomato had it’s own taste and brightness to it. The bigger tomatoes were juicy with a hint of the flavours that it was sous vide(d?!) with. The smaller ones were slightly sweet and were refreshing to eat as they were served fresh. I really enjoyed the taste of the basil and balsamic reduction, as it cut the acidity from the tomatoes and gave it a punch of flavour. 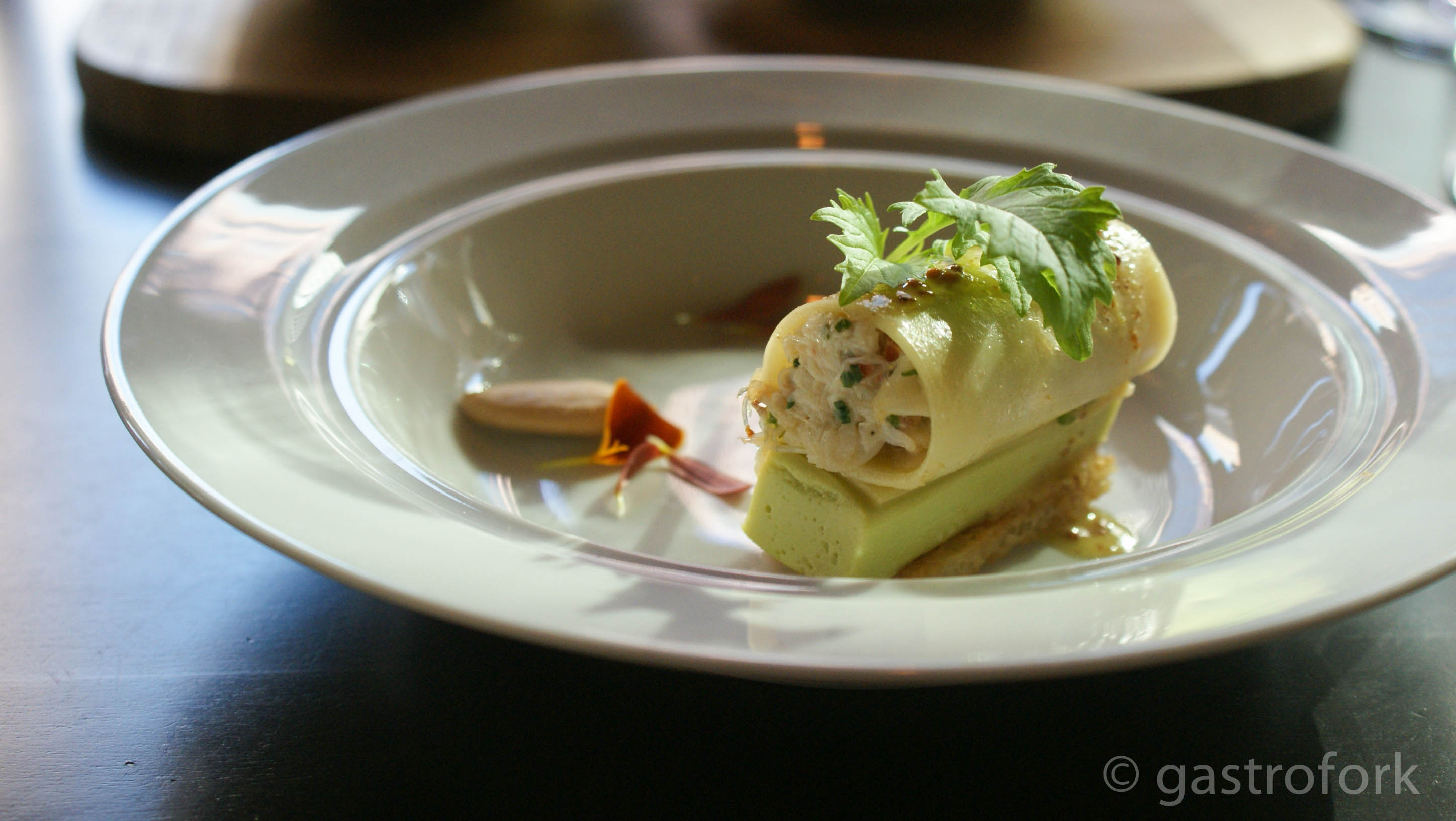 Our next dish was a familiar one – the Avocado Mousse and Crab Cannelloni. This dish is now served with a crouton crust at the bottom to give this dish a bit of a crunch and different texture to it. Still one of my favourite dishes here at Mosaic. 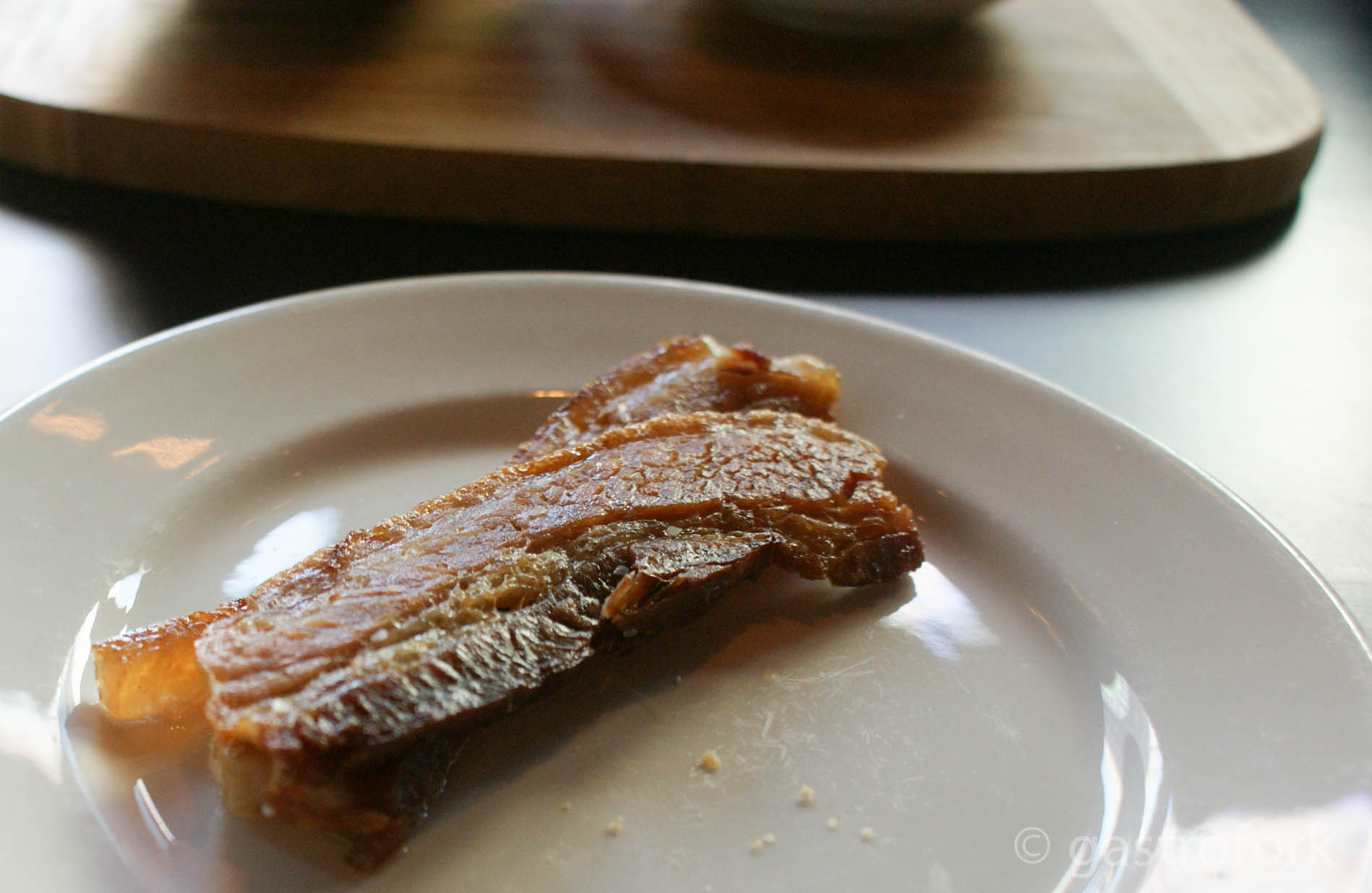 Before serving our next dish, Chef came out with a giant plate of freshly made, crispy pork belly. To die for. He could’ve just left the entire dish and we would’ve devoured it in two seconds. The pork belly is crispy and slightly fatty on the surface, but well spiced and quite tasty in the middle. Absolutely loved it. Up next was the Seared Scallops, served with fire roasted green pepper coulis, succotash (sweet corn and roasted tomatoes). I’ve had succotash once before, but this time was great. Every time I hear succotash, I think of “Sufferin’ succotash!” which is said a lot of by Sylvester of Looney Tunes (is my age showing yet?). This succotash however, was not suffering at all. Deliciously flavourful, it complimented the seared scallops that were simple with no distinct flavour added. The fire roasted green pepper coulis just rounded out the dish with a sweet taste. 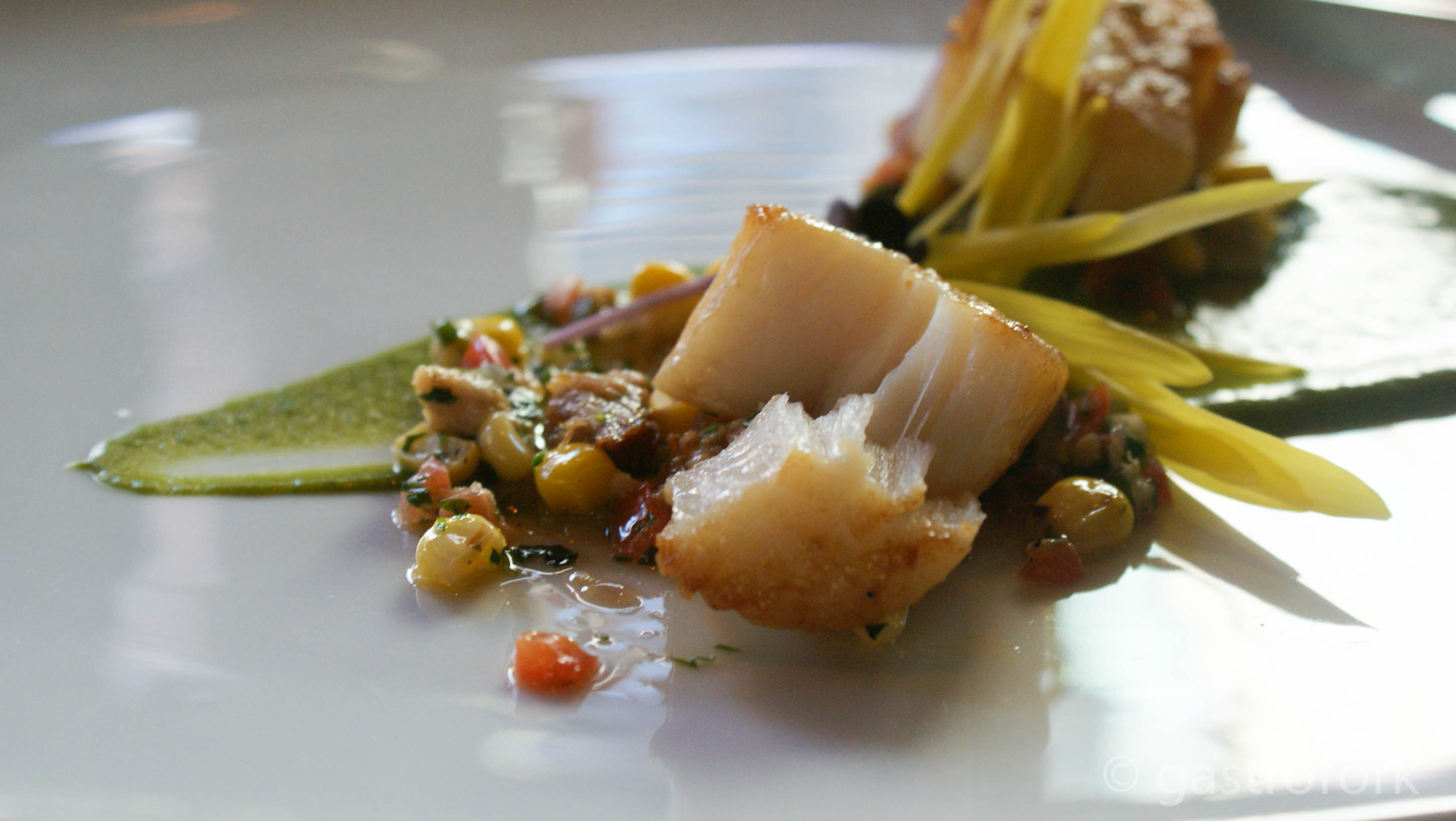 I wish I could get my scallops looking like this when I make them at home! Our next dish is the Long line caught ling cod which is pan seared served with confit, baby bell peppers and tomato nage. Nage is a sauce that is used to help poach seafood in dishes (Thanks Wikipedia!). This dish was interesting. I really enjoyed the bell peppers, their sweet taste was paired nicely with the delicious tomato nage. The ling cod is served crispy on the outside and meaty on the inside. I felt that the fish was a little underwhelming by itself, but when dredged in the nage, had a great combination of flavour. 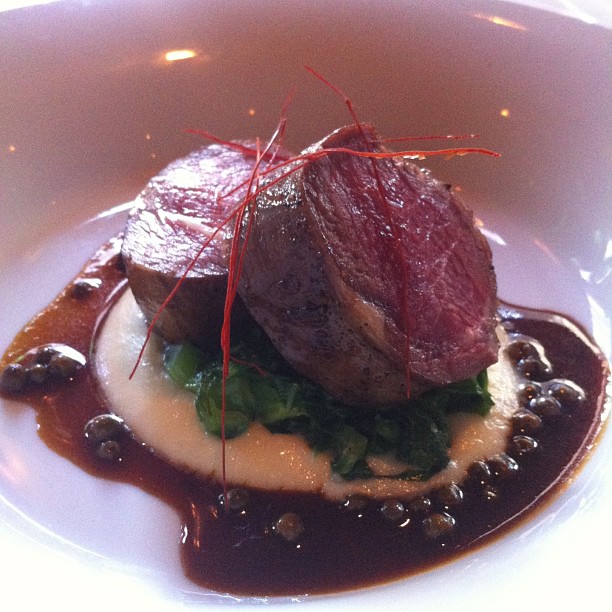 Two dishes came shortly afterwards – the slow cooked lamb tenderloin served atop pomme puree and mustard greens. This is probably one of the only places I love the lamb. I’m not a big fan of lamb, but here it is always made delicious and tender. 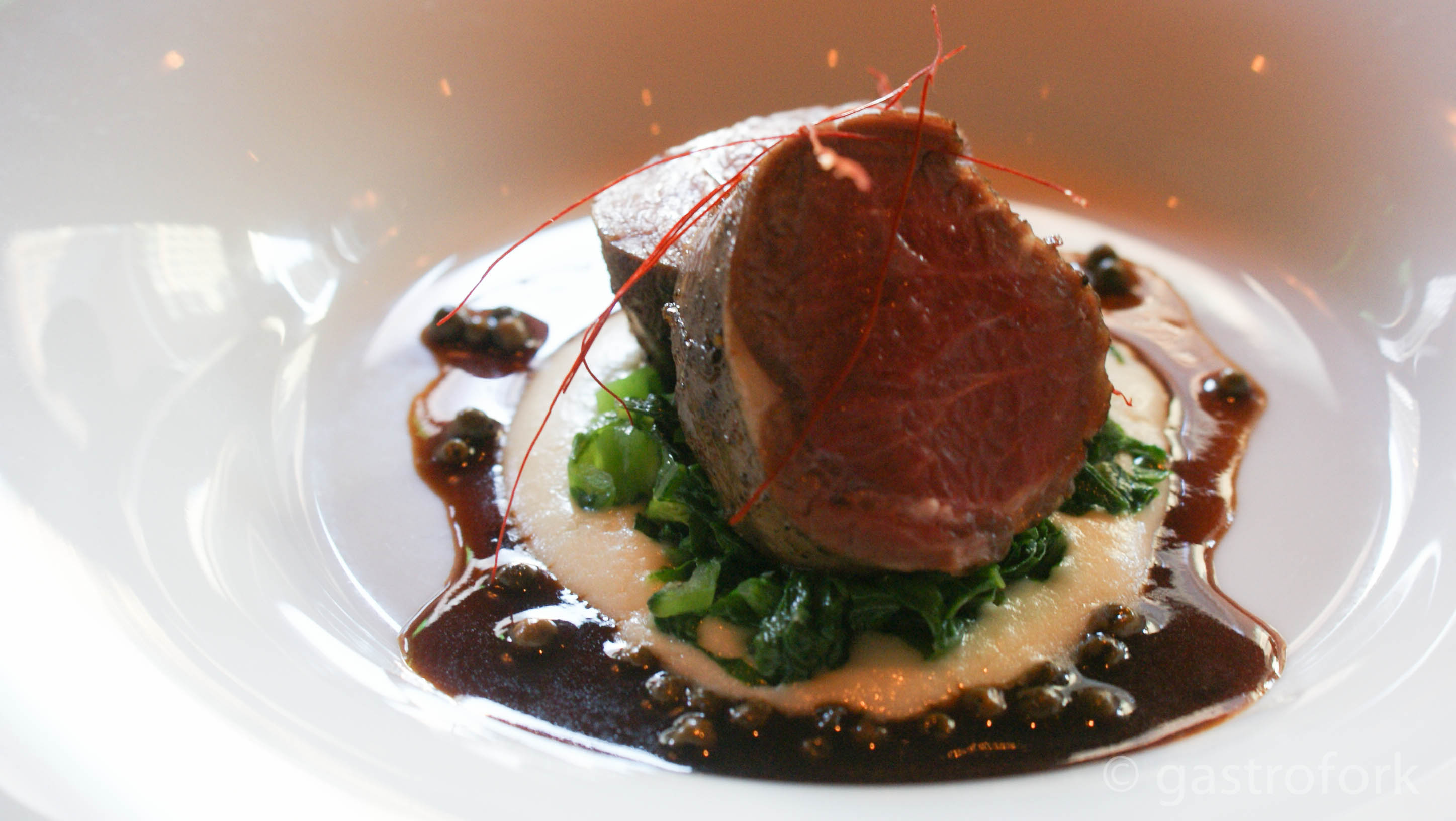 There is no gamey taste to it and their is no flakey bits of lamb, it cuts like a steak and has a subtle taste of the game meat. The mustard greens really brightened up the flavour, I enjoyed them a lot with the lamb. The second dish was a share dish called Cassoulet. It’s a French bean stew with heirloom runner beans that are organic, Oyama sausage, duck confit, tomatoes, onions, garlic and duck jus. This is apparently an item you can order off the regular menu. This is a hearty dish served with lots of interesting textures and a light flavour – but being pretty stuffed by the time this came out, meant I had about one scoop of it and that was it. This seems like it could be a dish entirely to itself, as it is quite heavy. 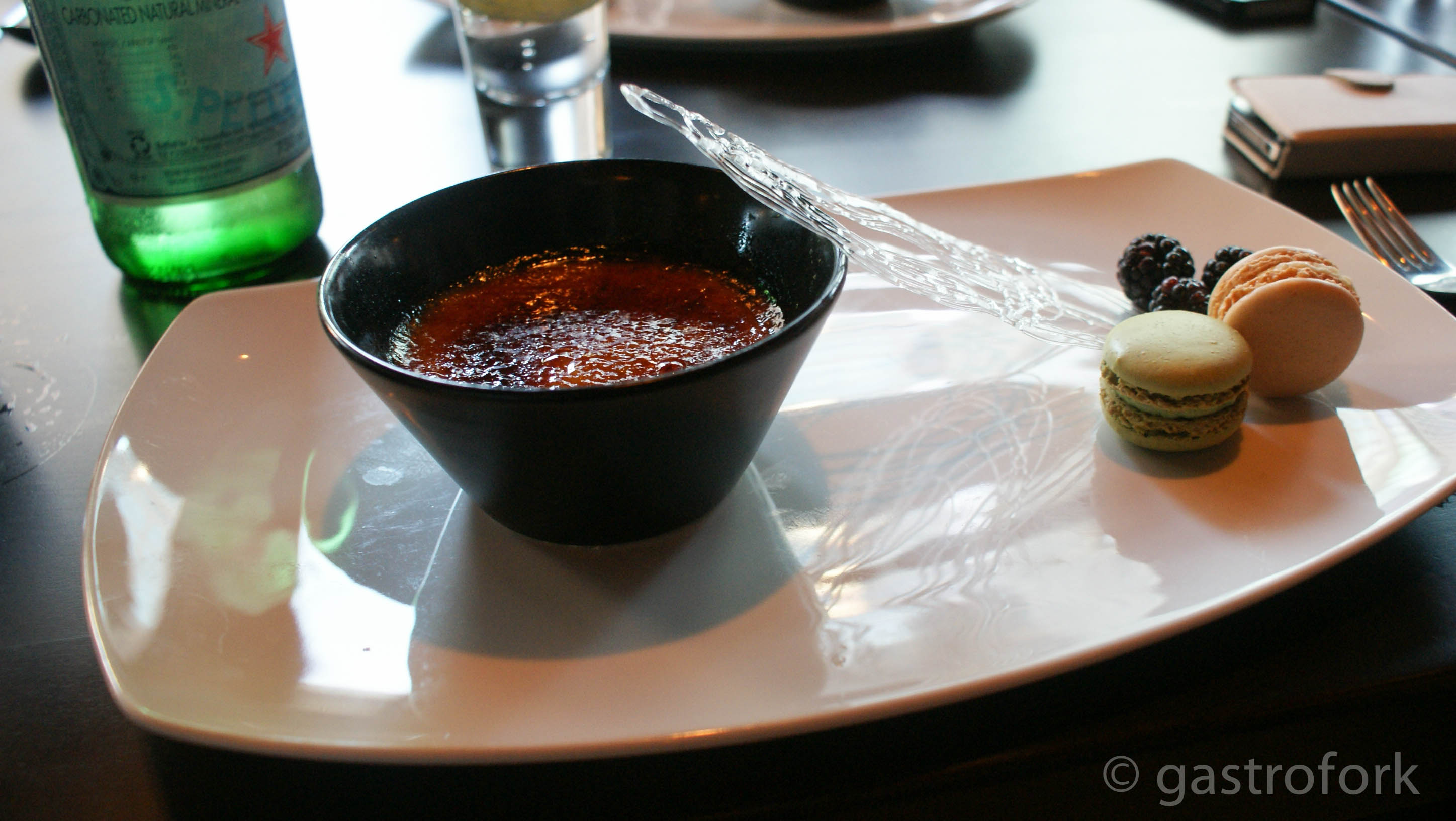 Finally, dessert. Three different types came out: their Creme Brûlée that was served with macaroons and fresh fruit, their Cheesecake made with Ricotta, mango and fresh strawberries and their signature Chocolate Cake. I got to try all three (of course I did…I am a sucker for desserts!) and I would have to say my favourite was the Ricotta cheesecake. 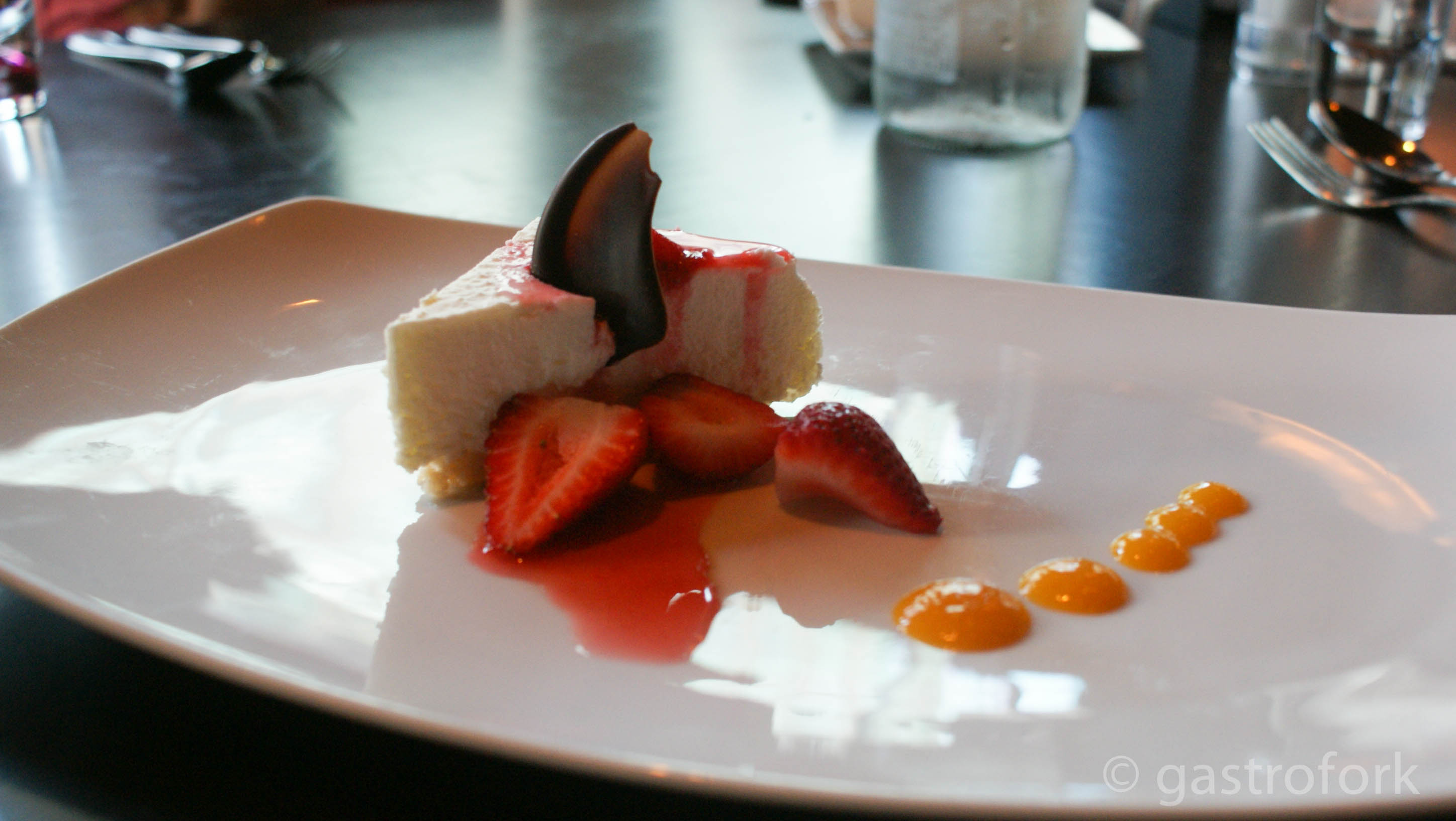 I’m a big fan of Ricotta cheese so it’s a bit of a biased opinion. However the Creme Brûlée was creamy and not overly sweet which made it very enjoyable. The Chocolate Cake was sweet, dense and packed with chocolate. It doesn’t seem like there were any bad choices here at all. To pair with dessert, I ordered an Americano which is served with this cute rock sugar stick that you swirl in your coffee. And yes, I made a Vine video about it.

This Summer Menu is available as of Friday, July 6th – so get out there and try this great feast!

I’d like to thank Chef Thomas Heinrich for inviting us to Mosaic once again for this amazing meal. The more I come here, the harder it is for me to find food that can hold a candle to the great flavours and pairings that he delivers. Chef Thomas’ creations should be making headlines in Vancouver – but all in good time. 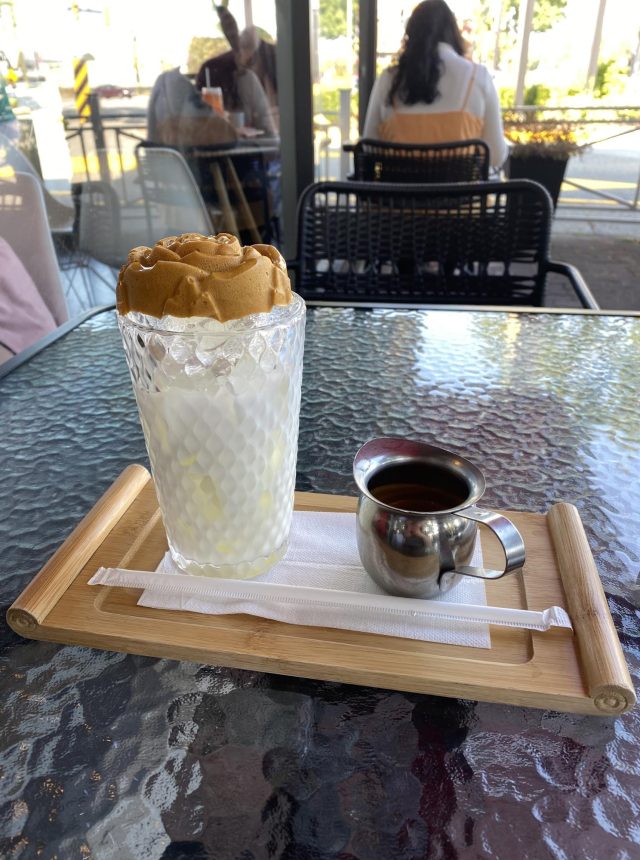 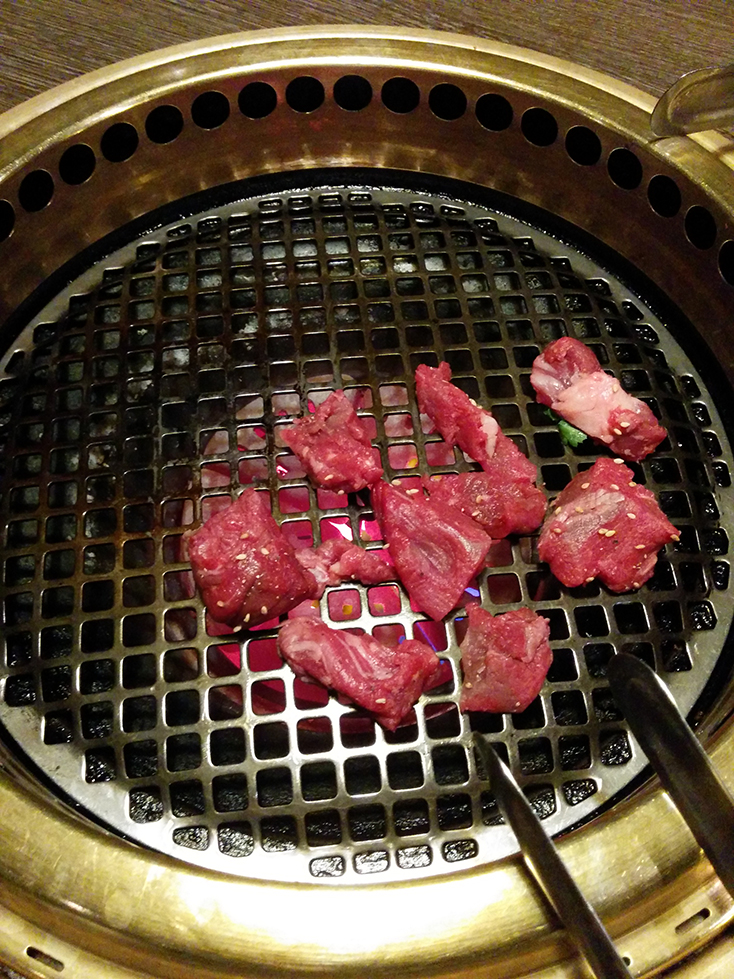