I’m actually not much of a deli person – now before you start gasping in horror hear me out. Normally if I’m feeling like something to eat that’s more “hands-on” I’d go for a burger or some chicken strips. Being so limited in my deli meat experiences, when Dee offered me a chance to try Dunn’s Famous, a restaurant since the 1900’s known for their deli meat, I just had to say yes! 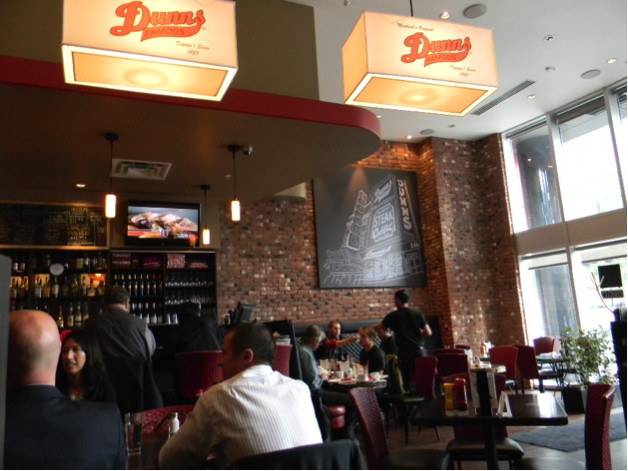 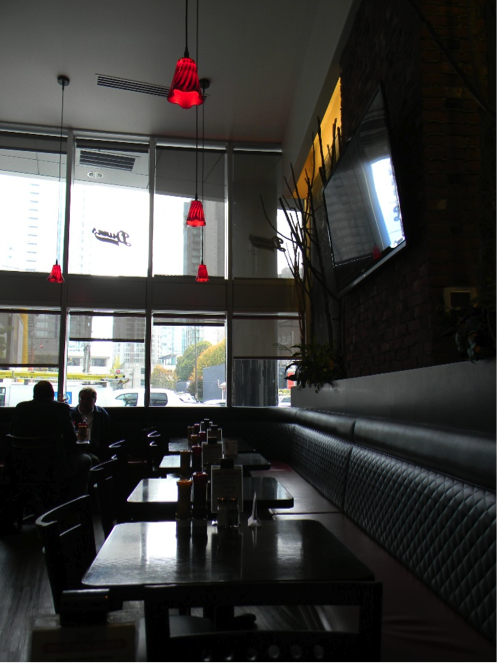 Judging from the menu online and what manager Rachel told me, I kind of expected Dunn’s to be more rustic and homey. Dunn’s started out as the answer to quick and affordable quality fast food in Montreal, and has since grown into a take-out, eat-in, catering, and party hosting restaurant. Walking in I thought Dunn’s looked very polished, as good as any restaurants downtown. Comfy to sit in and have a chat, just be careful about the lunch hour rush. Luckily my friend and I went a little after 1:30 so it wasn’t as packed.

Ketchup and mustard on the table, considerate but neither of us ended up using it! 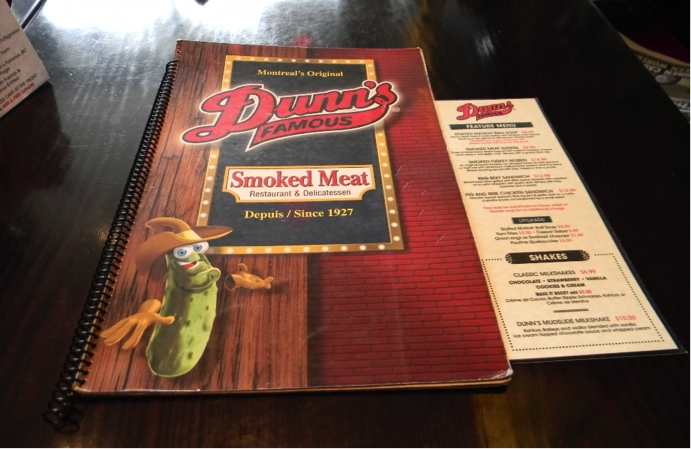 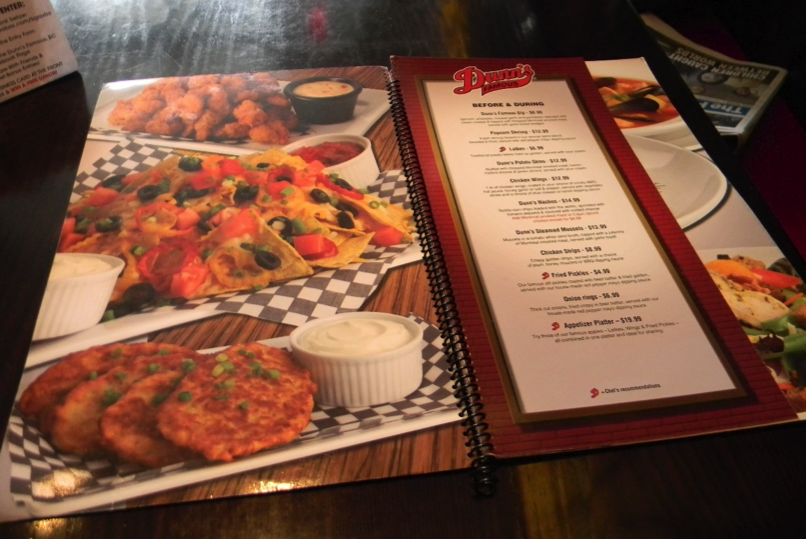 Just looking at the menu made me hungry! They also offer burgers, mac and cheese, appetizers and many other things but my eyes were on the prize. 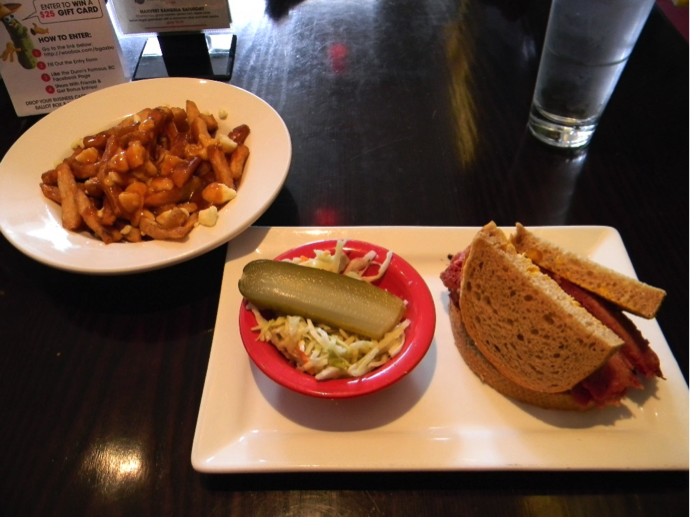 Dun dun duuuuun, the famous Dunn’s Super Montreal Smoked Meat ($11.99)! Not wanting to miss out I substituted traditional French fries with their poutine Quebecoise. There is a Super Montreal and a Super Giant Montreal, the only difference is the latter is 8 oz while the first one is 6 oz. Looking at it I thought “well this isn’t so big I can definitely finish this”. 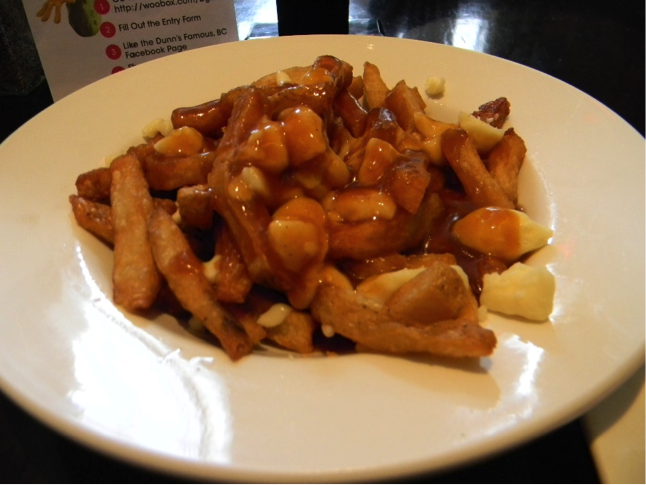 Let’s start with the poutine first, the cheese curds are actually shipped from Montreal and the gravy is made in house which I thought was very impressive! A generous portion of everything this was definitely the classic poutine. I originally thought that maybe it was a little salty but my friend reminded me, “well it’s a poutine what did you expect? It’s definitely salty! … but I like it.” Good thing I brought someone to share! As tasty as this was, my little criticism was that I like my cheese completely stringy and oozy, while this one had more defined chunks. 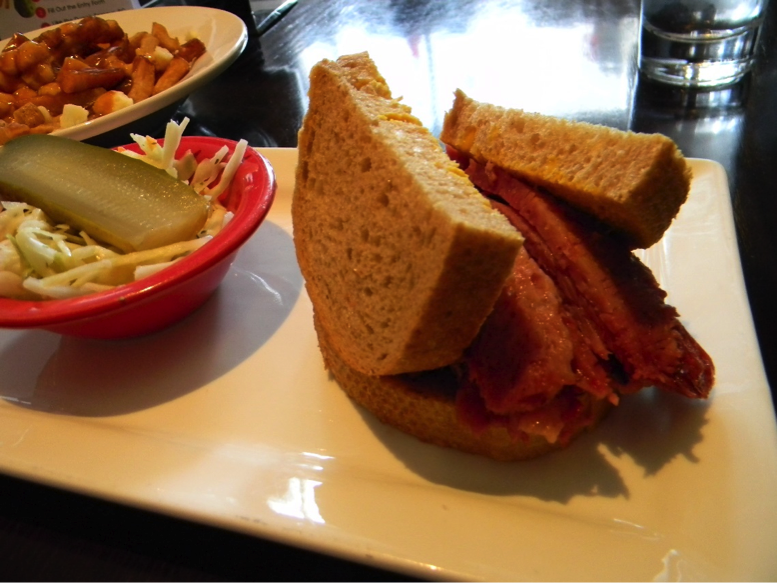 Ok, maybe I overestimated my appetite a little bit because with the poutine, coleslaw AND the sandwich I was quite full! You can choose between light, medium or fat on the menu but Rachel told me anyone who is a regular here will order medium fat. Of course I had to choose that one and let me tell you I don’t think I would want to try anything else. The meat is shipped almost bi-weekly from Montreal, steamed in the restaurant for an additional 3, 4 hours and then cut to order. They have a guy in the kitchen whose sole job is to cut the meat! Fall apart soft and I was expecting it to be very salty but it was just right. The coleslaw accompanying it is dressed in a vinaigrette type sauce rather than something creamy which I thought was very light and refreshing. My friend didn’t agree, but I alternated between one bite meat and one bite coleslaw which I thought was the perfect balance.

The meal also comes with a pickle which is another special at Dunn’s (you can buy it in jars separately). Although I’m not quite fond of pickles, I actually ate most of this one just because it was very flavourful. 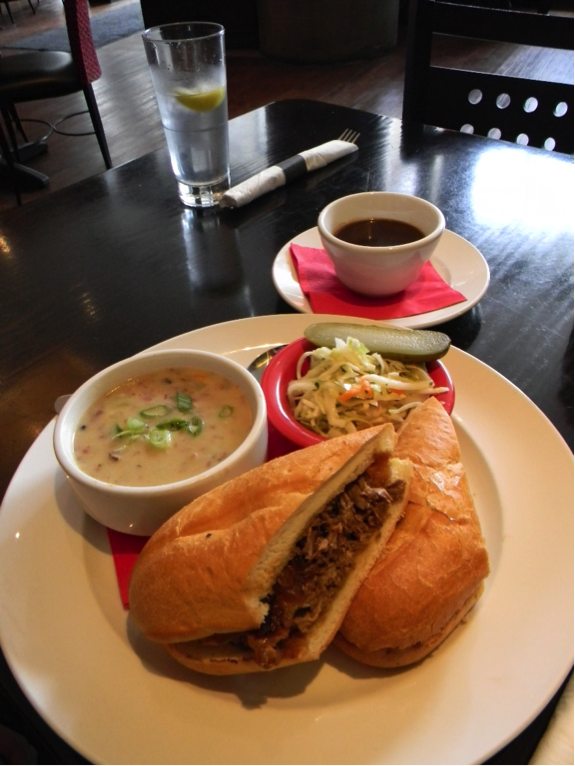 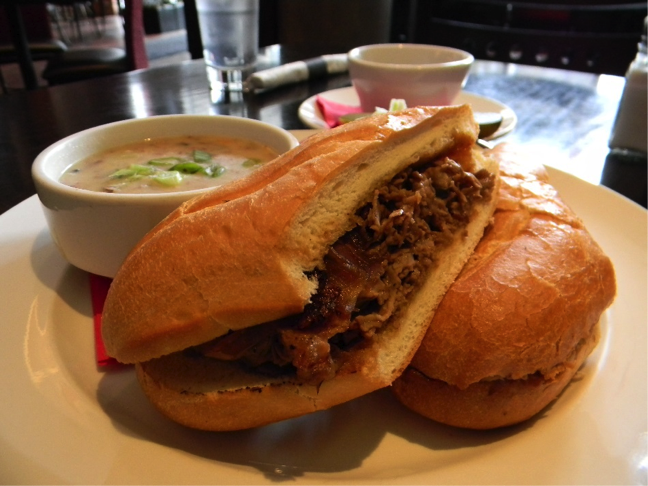 My friend ordered the beef dip with a beef chowder as his side, coleslaw, pickle, and in-house gravy. He said the meat was sweet and flavourful and the gravy was growing on him with every bite. We met up some time ago and he also ordered a beef dip so I asked which one he preferred, he chose this one lol.

I got to try a bit of the chowder, the meat adds a nice texture to the soup and doesn’t overpower it, it was nice. 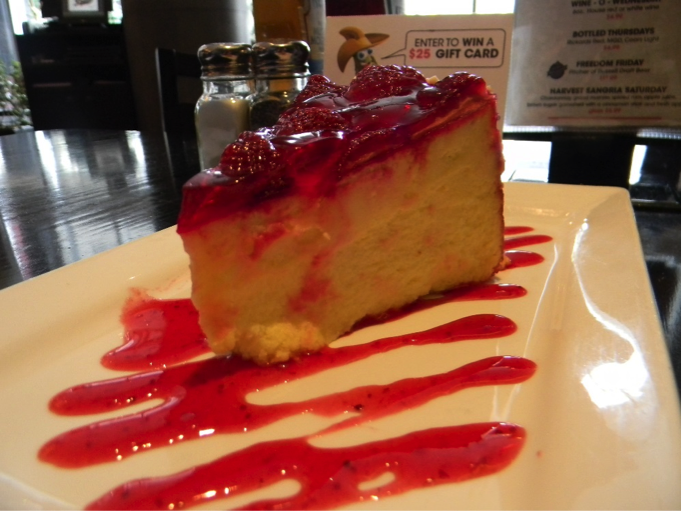 By this point I was pretty full already, but then Rachel started talking about cheesecake. An original recipe by the founder of Dunn’s, only 5 people now know this recipe. The only thing she can tell me is that it’s made of 3 cheeses. Alright, you got me, let’s have it.

Now there’s no crust in this cheesecake, my friend and I were both sad to hear, but as we were eating we were willing to look past it just because it was so smooth, milky and fluffy. The strawberry sauce wasn’t too sweet and the fresh strawberries on top I thought gave it the crunch I was sort of missing. The crust at the back is made with cookies and that made me feel like I was eating two desserts in one! I didn’t feel like I overate by ordering the cheesecake but this is definitely something I suggest you share. You can buy the cheesecake whole J

Overall, I would say my deli adventure was a success and when around the neighbourhood I would definitely go back for the sandwich and the cheesecake!

Disclaimer: Please note that this meal was paid for by Dunn’s Famous. 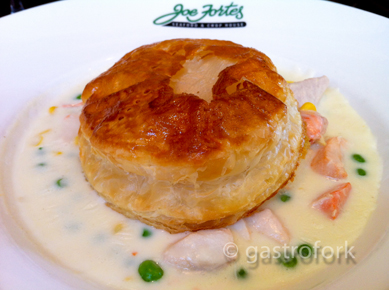 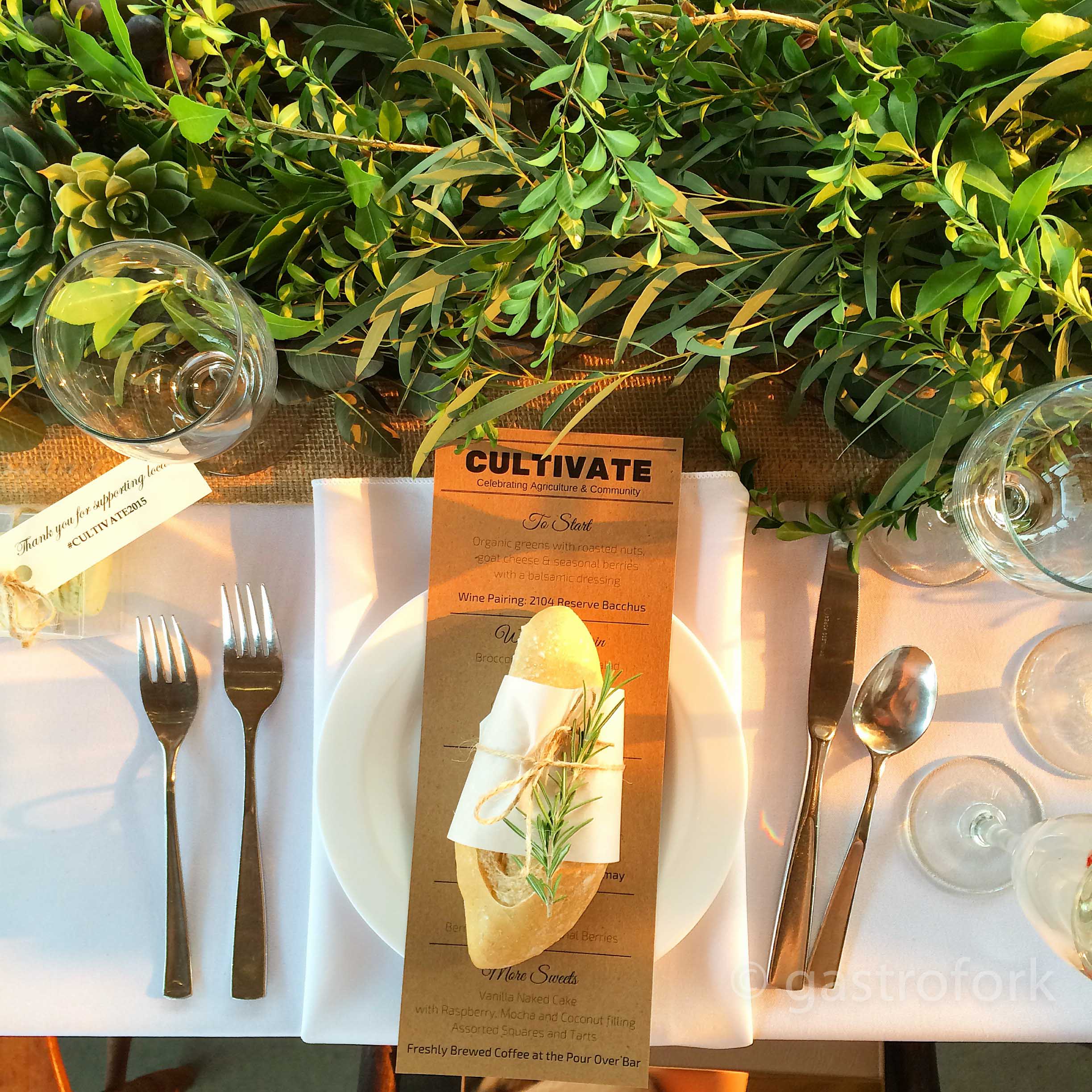 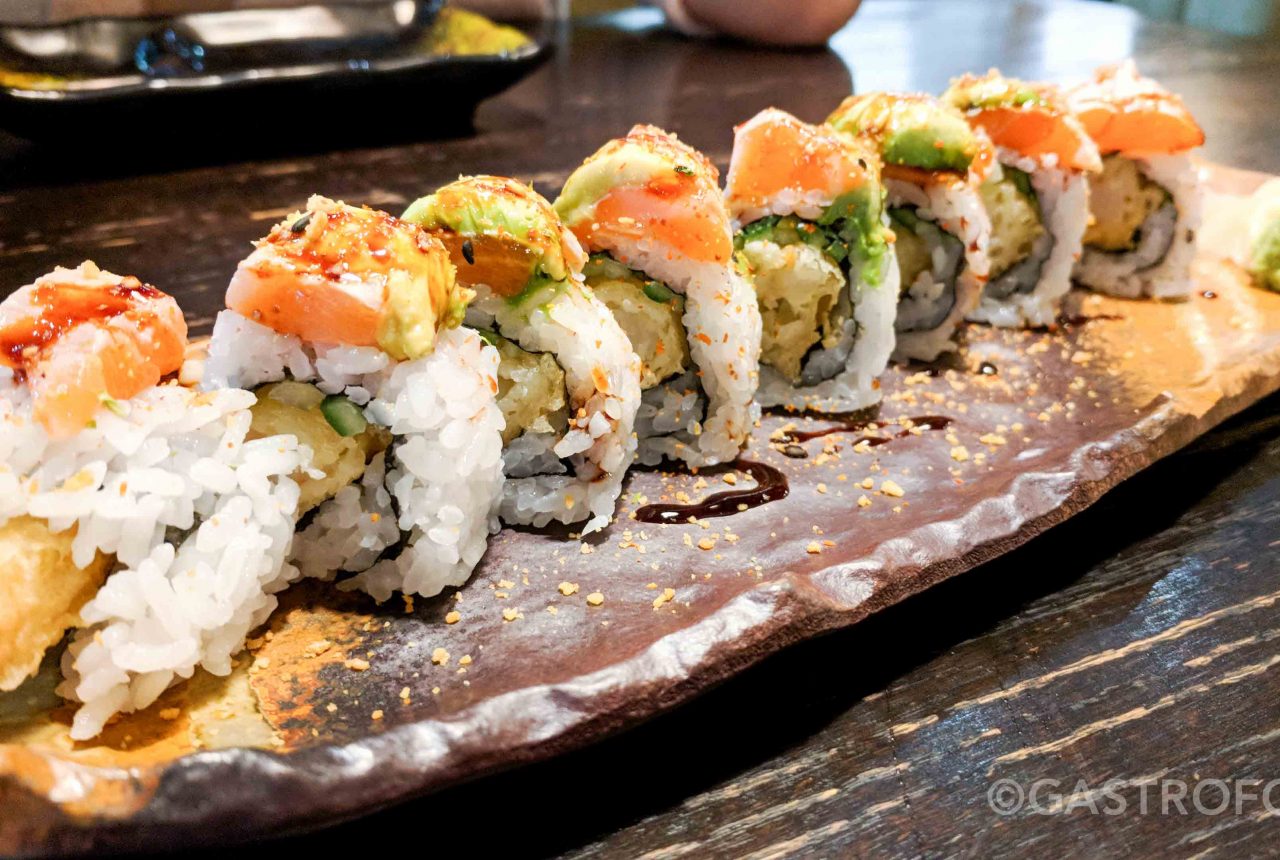