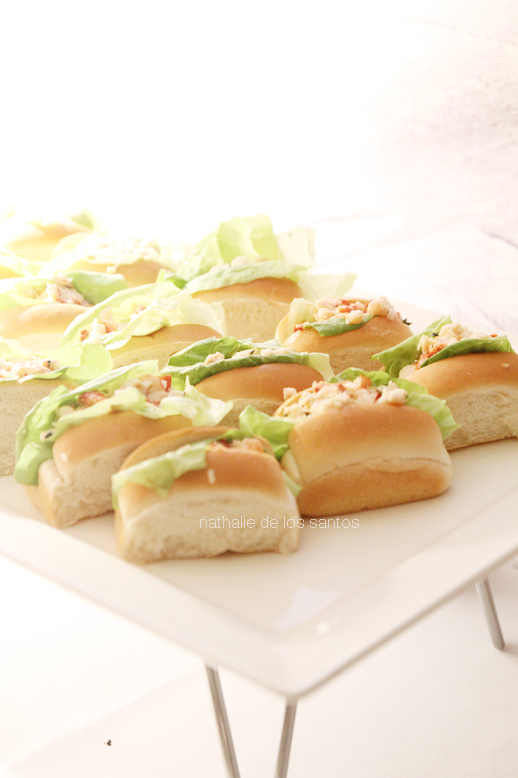 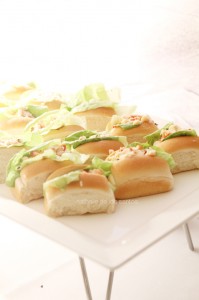 Prestons had an event to showcase Canadian-inspired dishes. Below is the menu they served, come along with me as I taste them all! 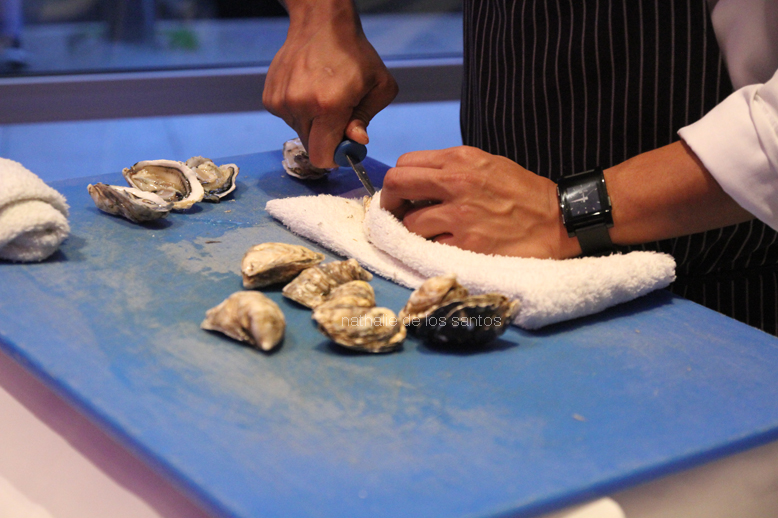 I love Oysters! This lovely gent served these, along with difference sauces to pair with them. I kept coming back to this station after I was finished the others, because these were fresh and light, the saltiness refreshing me after a couple brews. I had the Maple Cream ale instead of the honey, because it’s just a favorite of mine from Granville Island. 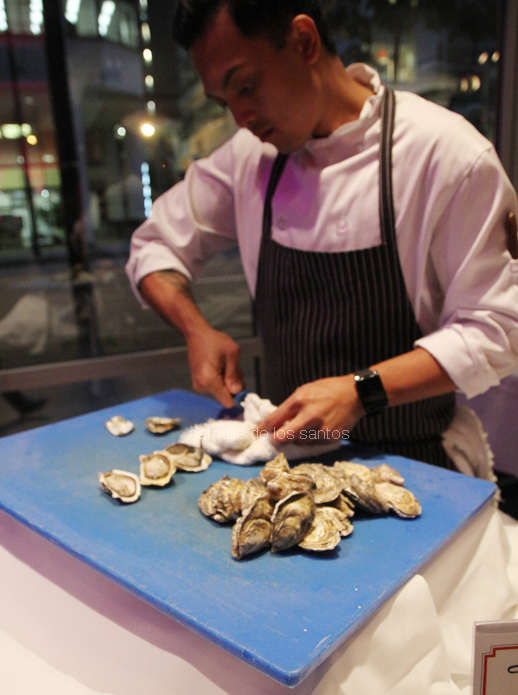 As a random anecdote, if anyone’s looking into the etiquette eating oysters, this is from “In Half a Shell“: 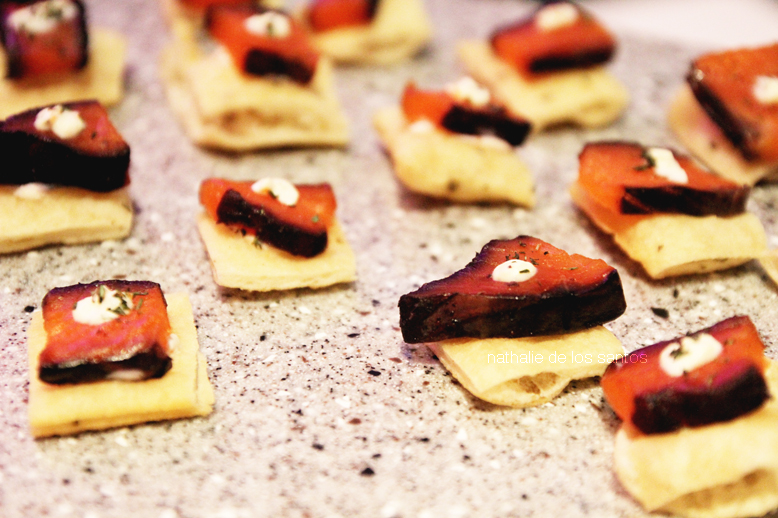 Bannock was an amazing choice. Bannock is fantastic because it’s slightly soft and doughy, so it’s not too messy to eat for an hors d’oeuvre. The salmon was soft too, almost like a pate. The saltiness in the bannock cleaned the palate of salmon. 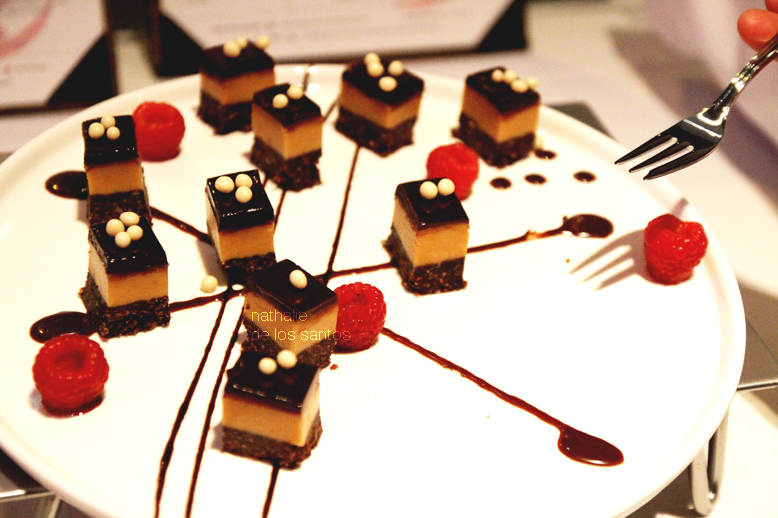 Nanaimo Bars. To be honest, I never really liked Nanaimo Bars. The presentation is lovely and what made the bar tasty to me was putting one of those perfect raspberries ontop. I think from now on, I’d probably eat them with fruit. 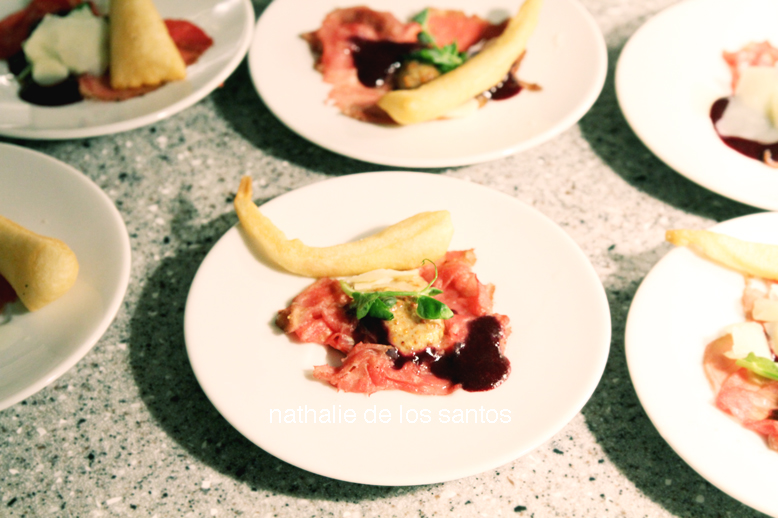 Peace River Bison Carpaccio with Crisp Bannock. I found myself eating the bannock first, because I absolutely adore how the chef included it in the menu. The Bison was quite soft to eat, like a beef tatake. 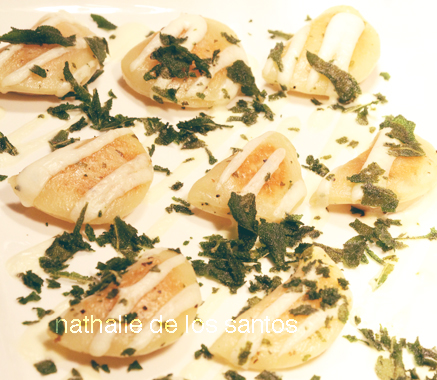 Pierogies with Creme Fraiche. I popped these with the Rickards Dark. I love Rickards Dark, because it’s sweet and smooth, even though being very heavy and thick. Hello poutine! I liked the fusion of sweet and salty, the onion adding a bit of a bite to eating this dish. The sauce didn’t make it too rich or creamy either. For poutine, it was surprisingly balanced in its taste. 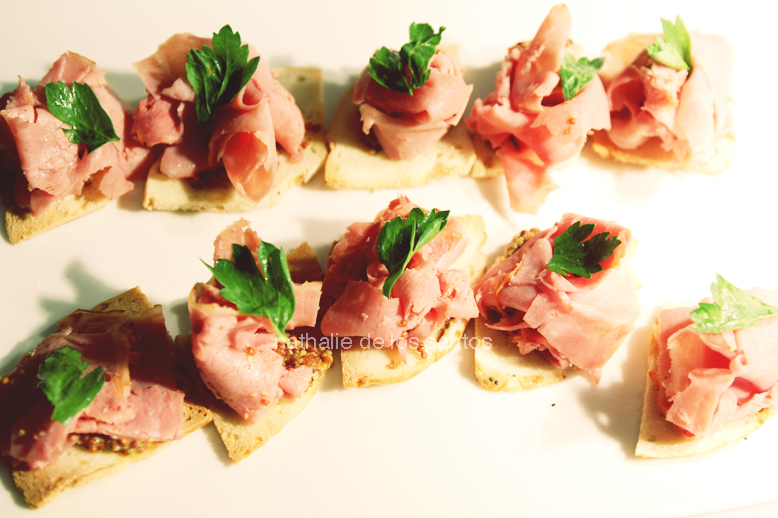 Mm! I thought these were kind of plain in comparison to the poutine, but I guess when you have them together one should complement the other – which they did. The spice of the dijon would be mixed with the sweet and salty gravy of the poutine in my mouth and then this “plain” Montreal smoked meat on bagel chips became what cigarettes to coffee are. 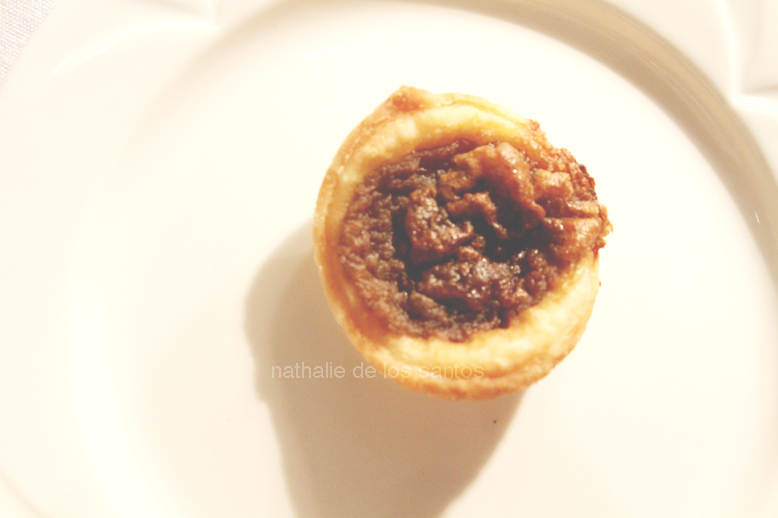 Again… aha! I don’t usually like butter tarts, because I always find them ridiculously sweet. But this was not – it had more of a pie consistency and a sweet, little heart. I had two. Preston’s is doing something, that I’m eating desserts I normally turn my nose at. Lobster Rolls – they kept running out! These were fantastic. They were light, refreshing, crunchy and again not too creamy. The bread was soft and hearty. Yum! Blueberry Grunts – I don’t know what this is. I thought it’d be like jam putting it in my mouth, so I had some aversion to it at first. When I took a tiny lick, it was like a thick puree of blueberries. I can’t say I finished this one completely, only because I wanted to possibly eat this with something. But the grunt’s quality and flavor was good. My mind just can’t get jam out of it. 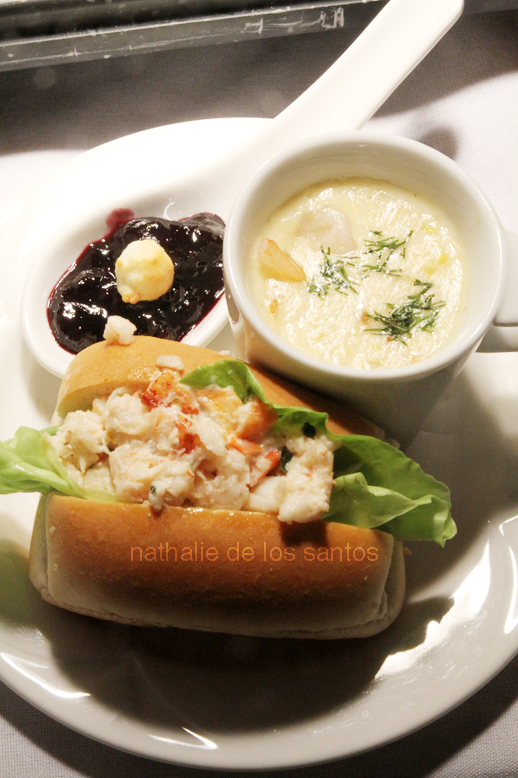 There was a lovely seafood chowder I came back to. It was more refreshing than heavy, and I nabbed the bannock from my Bison plate to pair with it.

Overall, this was fun event. I got to catch up with some old friends, chat about my times in Germany, learn about the chef and have some sweet eats! Thanks, Prestons! 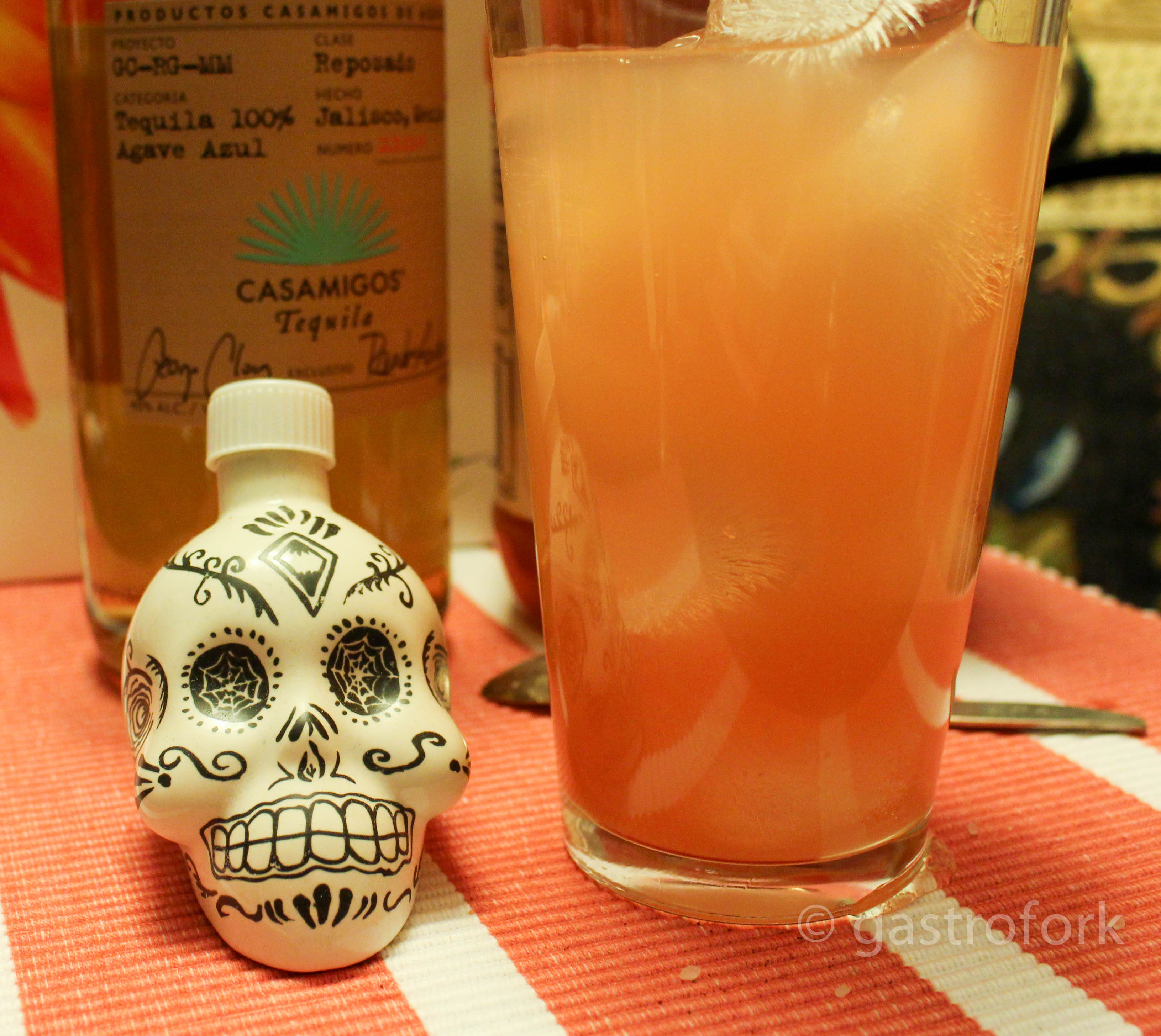 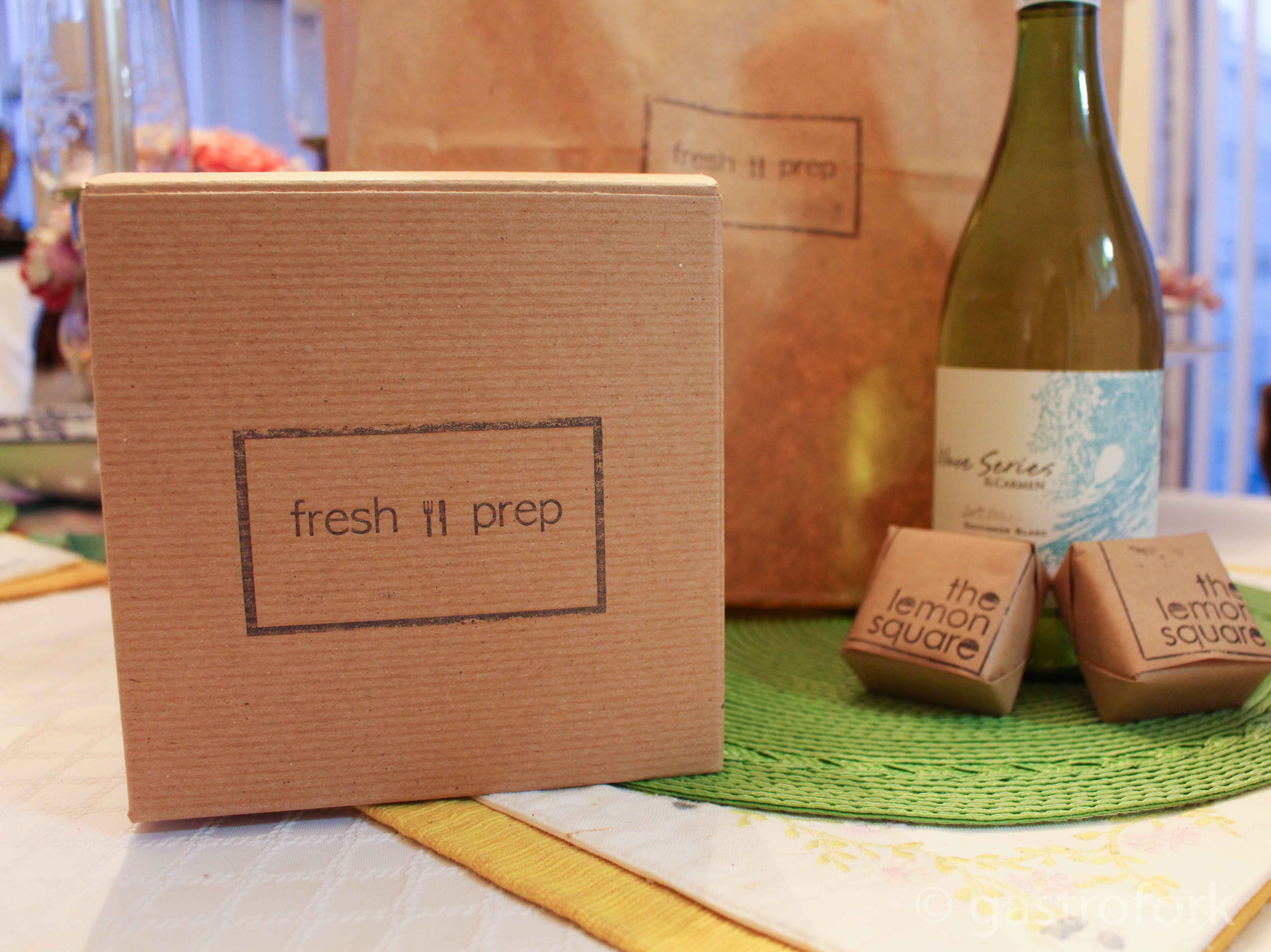