I was invited to Hop & Vine’s Pub and Restaurant’s event to try a 5 course dinner with a 5-beer flight to pair with the dinner. Paul and I went to St. Augustines on Commercial Drive to meet up before bussing out to Hop & Vine. So… Going to this event slightly pre-sauced… was probably not the smartest idea. Hop & Vine was actually quite generous in their food portions (we joked later it was a ten course meal) and would refill our flight glasses!

Hop & Vine is a bit of a far commute for me. It’s near Burnaby Mountain, and I’m in Vancouver. It is worth the trip, as the food is fresh, local, given in abundance and above all, it feels like a home cooked meal with gourmet flair to it. I eat so much expensive trash in Vancouver’s downtown core when I get myself hammered on the weekends. I respect Hop & Vine for trying to source their food locally, making things from scratch like their salad dressing and having a community around their chefs and food. 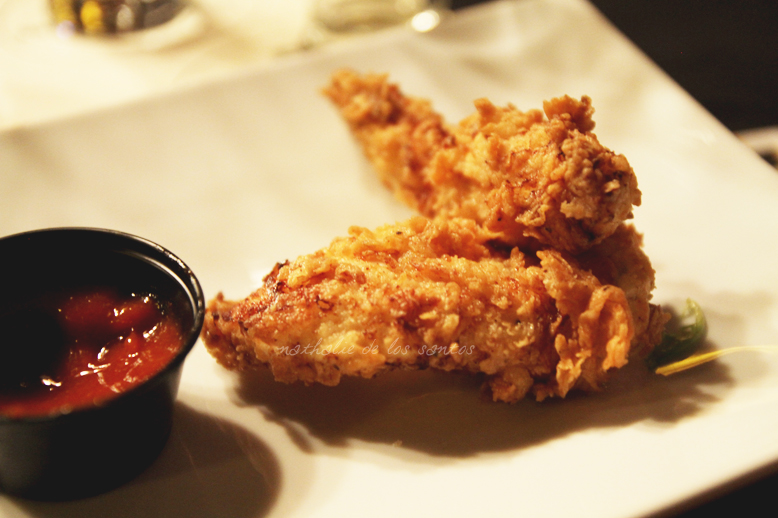 We had Townsite Brewing’s Shiny Penny Belgian IPA. I was chatting with Mike – a writer and definite whiz at beer (check his site out!) – how I dislike hoppiness. I shy away from IPA, where he says that is his favorite.

This IPA’s bitterness was balanced by caramel and something fruity – orange? I ended up quite liking this IPA. It paired extremely well with this delicious piece of buttermilk chicken! The strips are marinated in buttermilk and served with curry ketchup! That hit me – it made me miss Germany, as that was a popular condiment there. 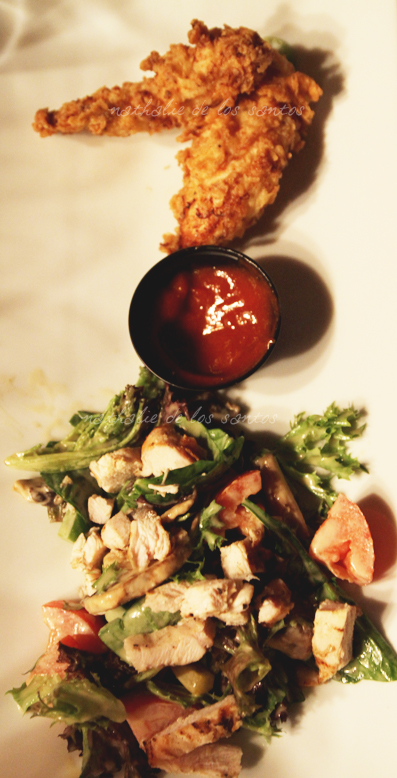 They served the strips with their Winter Salad. Their salads rotate depending on what greens are available during the season. The Winter Salad is tossed with wild mushrooms, roasted peppers, candied pecans and a honey Dijon dressing topped with grilled free run chicken breast.

I was in love with the buttermilk strips, so it was hard to switch over to this. Though, the salad dressing was light and sweet, so it cleaned my palate from the heavier chicken strips. Paul is allergic to peanuts so I told him to stay away from the salad. He picked at it and asked me if there was pecans at all. Scott, the owner, was a very friendly man. He wandered around and talked to each and everyone of us. Paul asked him if there was any pecans in it. Scott glanced over and realized the kitchen might’ve forgotten to sprinkle some on his, but Paul assured him it was no worry. Paul explained his peanut allergy and Scott was very accommodating of it. 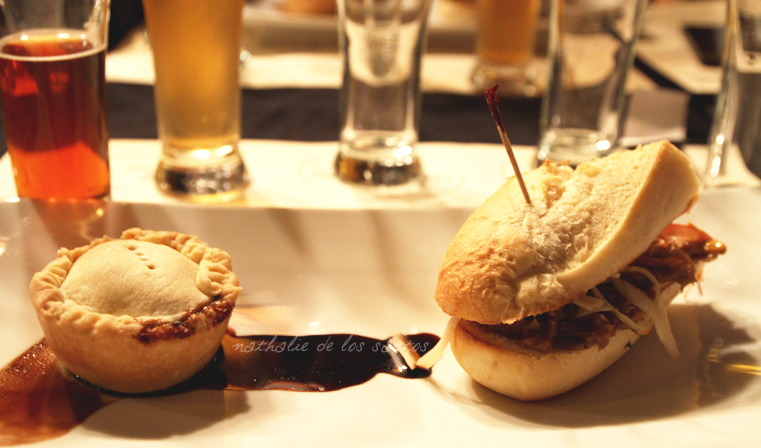 Our second round was Odin Brewing Company’s Viking Gold with Mini French Meat Pie and BBQ Pork Sandwich. The Viking Gold was slightly carbonated, sweet and curt. Citrus, malt and almost like a cereal type of bready finish, I enjoyed this one but it still had a bit of a hoppy bite to it.

The mini french meat pie was one of my favorite dishes of the evening. The beef and peas is in a rich gravy with garlic mash and a red wine demi-glace. The sauce was a perfect balance of salty and sweet, and the wine gave it an exquisite taste. The flaky pastry picked up all the flavours as you swallowed. The BBQ Pork Sandwich reminded me of getting pork buns at New Town, because it’s Asian styled. Paul and Mike both were surprised by it’s sweet flavour, but Jenny (My Secret Eden) and I were accustomed to it. I asked her to explain how pork bun’s meat are prepared, as I forgot what exactly made pork buns sweeter. Sesame oil, rice wine, sugar, ketchup, oyster sauce, etc, all add to the sweeter flare of this dish. 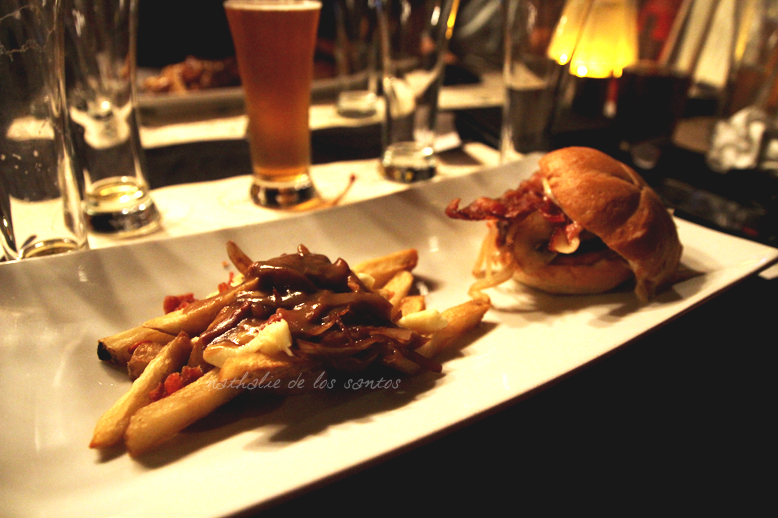 The Third Round! We had Green Flash Brewing Company’s Imperial IPA. It was paired with a mini pumphouse burger and poutine. Remember how I said Paul and I previously went to St. Augustine’s? At this point we were getting hammered because this place would also refill our flight glasses! I happened to spot Dennis Pang, a previous colleague of my sister, Dee. I was fanning myself just asking him if he was hitting a buzz as well. They were giving us so much!! Which is awesome!

Whew! The Imperial was quite bitter, but it was a clean finish and had a hint of vanilla and a range of citrus fruits – grapefruit, tangerine and probably a handful more. For not liking IPAs, Hop & Vine really chose the right ones to get me into IPAs! I went to Craft Beer Market and had a flight of IPAs and wanted to barf. Now, I’m at Hop and Vine and knowing which IPA to order in the future. H & V, you have my respect.

The burger helped soak up the alcohol. This was one of my favorites again – the beef you could probably just eat by itself, it’s such a flavorful, lean piece of meat. It’s from Alberta as well. Topped with bbq sauce, aged Canadian cheddar, crisp bacon and fried onions, I wanted more. I couldn’t believe this was a miniature – this “mini” was quite big!

I was starting to get full when I got into the poutine. Organic, hand-cut fries topped with housemade gravy, cheese curds, crisp bacon bits and caramelized balsamic onions. Scott asked us what we thought of the poutine. Half the table loved the onions, the other half (myself included) felt like there was a bit too much onion going on. How I see it is just that I pick around at my poutine any way. I’ll get a naked fry, then poke at a cheese curd and dip either in gravy. There’s a new element in the dish – the balsamic onion. I was still picking it up and enjoying it. I fancy caramelized onions, a lot. I always seem to make my onions this way. However, I can’t chain-eat onions. Not like how I can stuff a spoonful of curd in my mouth, or french fries. That’s where it was throwing my brain off. I’d definitely would have to slowly eat the onion topping. 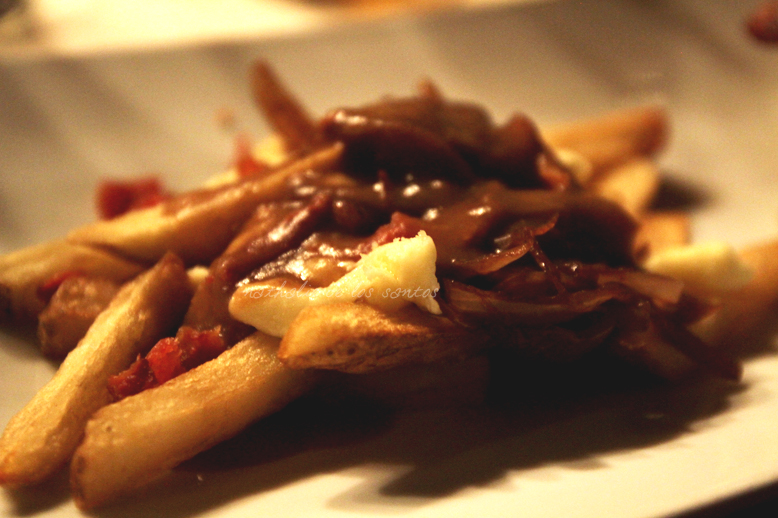 The poutine in question!!! Really it is good, don’t get me wrong! On my dish, there wasn’t a lot, but on Paul’s, there was a lot more gravy and onion on his. I can see how he was getting a bit thrown off a little too.

Round Four!!! We were getting monstrously full at this point. The beer was Steamworks Brewing Company’s Pale Ale… which I’m not too fond of, but I’ll describe anyway. It’s a light beer I use to get sloshed with, because it’s not overwhelming. It has a smooth, caramel malt and citrus taste to it. I suppose I should compare it to Granville Island’s Pale Ale… I don’t like either. And I love GiB and Steamworks respectively. Just that their pale ales unfortunately, aren’t memorable. I struggle to describe either in flowery language, simply because their flavors are both very, very fleeting.

Mike at this point asked us a trivia question. Which two Canadian companies does Sapporo own? To my surprise, Sleeman and Okanagan Spring! What the heck! The more you know.

We had an Italian Meat Lovers Flatbread, which is housemade flatbread, topped with proscuitto, capicolli, pepperoni, provolone, aged Canadian cheddar and mozzarella. Uuuhh, I love proscuitto and capicolli – what a wonderful choice! The meat overwhelmed the cheese, as all I could taste was the meats. It was delicious, though one of us commented it is pretty salty. The Chipotle and Chopped Chicken Salad that came with it was also very good. It had smoked bacon, grilled free run chicken breast, crispy tortillas, aged Canadian cheddar, cucumbers and tomatoes tossed with an orange chipotle dressing. To be honest, I liked their Winter Salad more, in terms of creativity. The Chipotle and Chopped Chicken Salad is what I’d have on a comfort food night, the Winter Salad when I’m feeling refined. Though, the one thing I dig with the Chipotle Salad, is orange + chicken. I wish more places did this!

Ok. This will probably sound disturbing, but I had way too much food, that I physically couldn’t swallow diving into the fifth round. Thankfully, before my throat was closing up, I managed to try a bit of the last round.

We had Double Trouble Brewing’s Prison Break Breakout Pilsner. It was slight carbonated, mild malts and grassy. We got into a conversation about this beer and how it’s not a typical pilsner. We talked about Alexander Keith’s just killin’ the expectations for a pilsner. Same with Guinness for stouts. Give a Guinness the deepest, darkest stout and they’ll probably just want a Guinness. I couldn’t get in on the pilsner conversation, but I mentioned in Europe, how some people will mix Guinness with currant and other things. Scott smiled, saying that he finds that interesting, but has heard stories of people who will be kicked out of UK bars for asking for such a thing.

The deep fried lime tempura prawns were SO good! The lime sauce cleaned off the prawns, and lingered in my mouth, the lime pairing with the saltiness of the prawn extremely well. The Butter Chicken is legit. It is not the white-person version of butter chicken, it packs a punch of spiciness. It’s so good. I was actually getting depressed that my body was rejecting all food at this point. I will have to come back and devour this butter chicken. It has been a while since I’ve had such good curry!

My final verdict? GO TO THIS PLACE. It is fantastic. If it’s also an incentive, there are a lot of TVs around and large tables for parties as well. I’m interested in the liquor store attached to this pub, I may come back to pick up some mighty fine IPAs.

Below were our drinking mates for the night. Mike, beer-guru and Jenny, bloggress extraordinare (also a to be mom, congrats! She didn’t drink, we swear!), and our +1s! Haha! It was a great night. We walked home with Mike to the Skytrain to work off all the food we consumed. We had so much, it soaked up all our drunkeness, so we were just waddling penguins to the skytrain. I will have to come back for New Years, they do another set meal like this that sells out quite quickly. 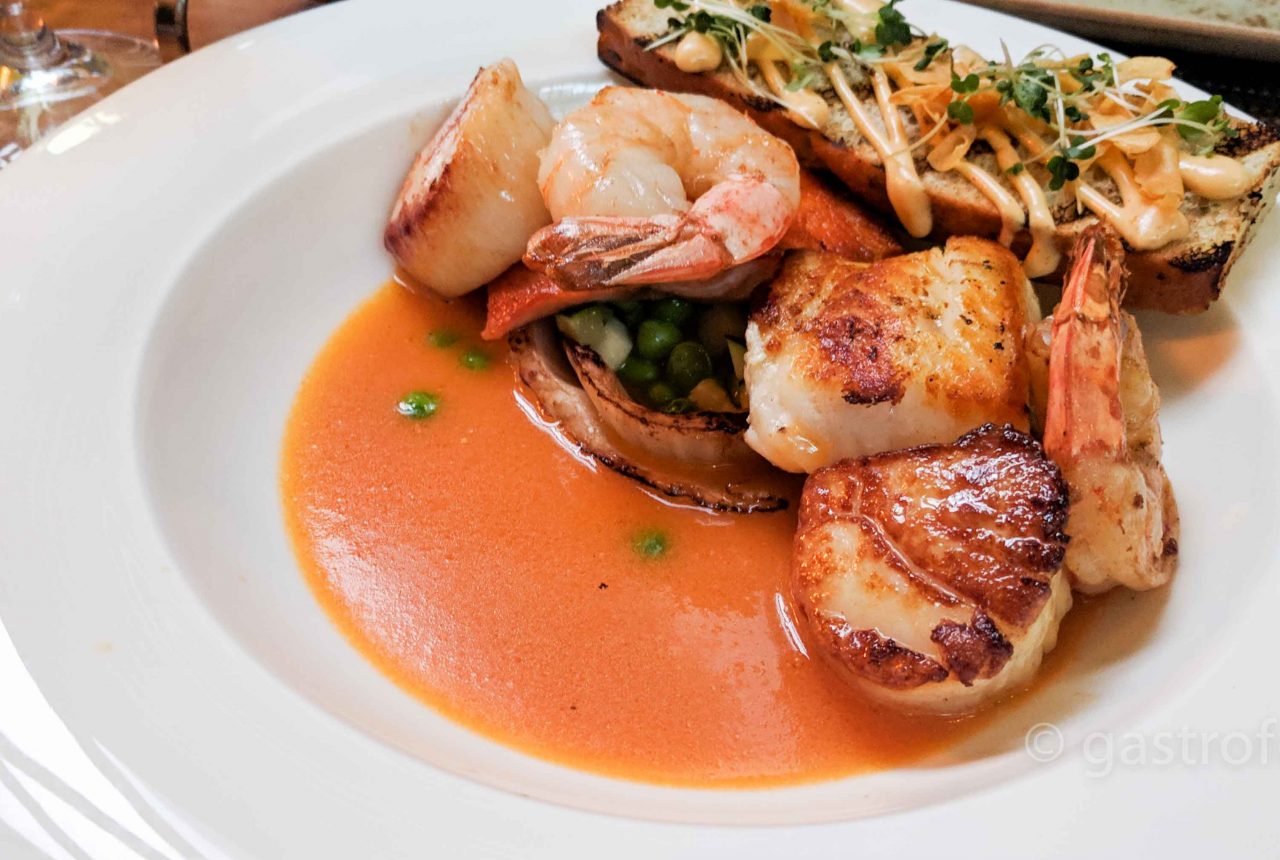 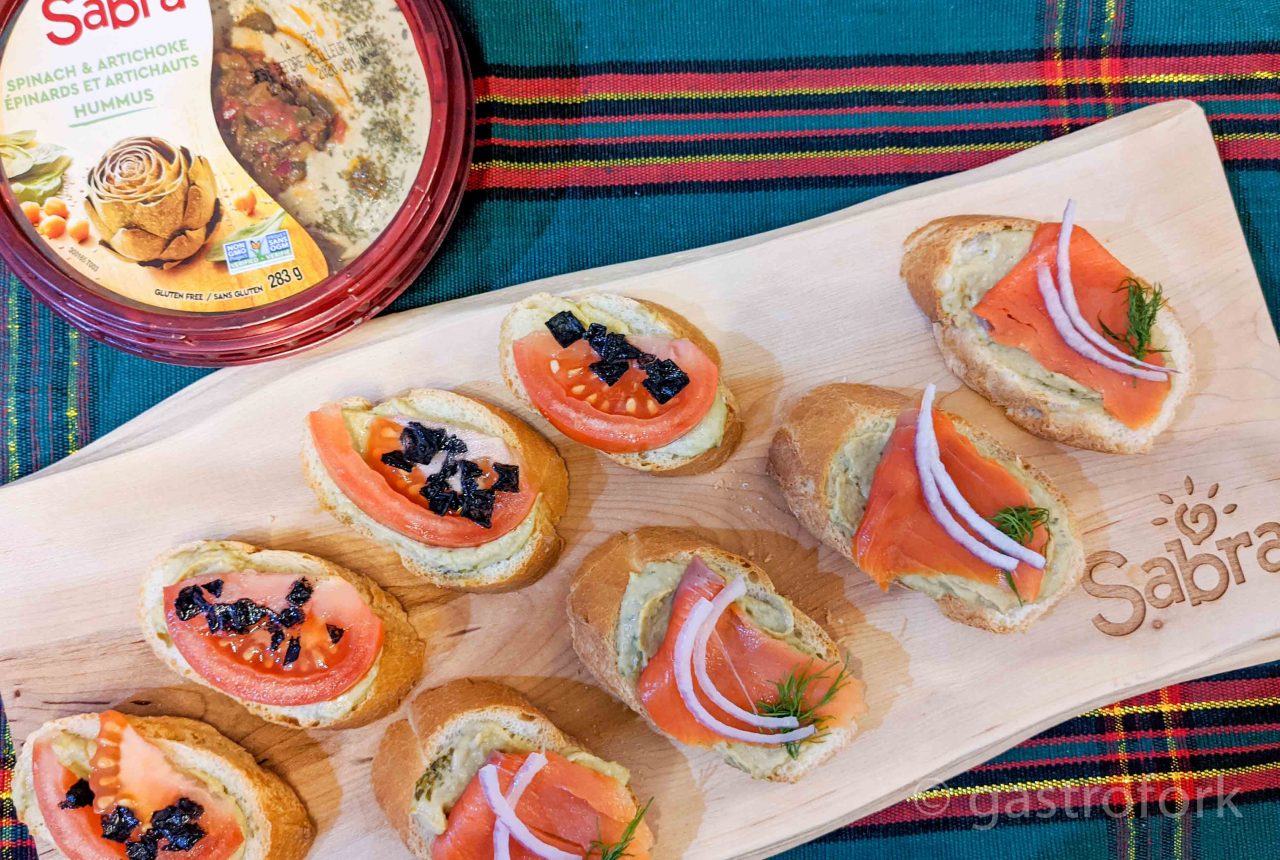