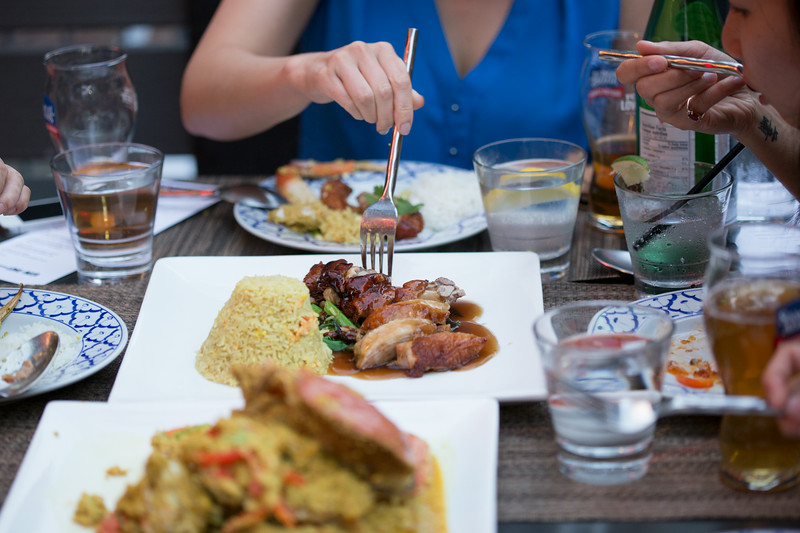 It’s not every day you get called upon to attend a Songkran dinner, let alone one paired with ice cold beer, courtesy of Samuel Adams. But being able to invite five friends along to enjoy it is an extremely rare treat.

Urban Thai Bistro has been a Yaletown staple since 2000, which is part of the Thai House group owned by Desmond Chen. They recently went through a refresh both in the space and on the menu. The menu is now expanded and they have brought in new chefs from Thailand to create more traditional Thai dishes.

I have done a post before on Samuel Adams when I made bacon cheddar beer bread (yes, you read right) but a quick history on the brand: Samuel Adams started off in 1984 way before craft beers were cool. Originating from Boston, Jim Koch wanted to shake up the industry by using his grandfather’s recipe and used traditional brewing methods to achieve the first, home-brewed batch of Samuel Adams. This is one of the few that forged the right path towards craft beer popularity.

Before I start off with the review, you might’ve noticed already but the lovely photos are not my handiwork. These photos were all taken by the great Justin Lam of Three Sixty Photography, so be sure to check out their website too.

Now back to our regular scheduled programming: the FOOD inspired by the Songkran Festival. The Songkran Festival is usually held in April and although I’m sure there is a long, respectable history behind it – the first thought that comes to mind is water! Why? Because everyone splashes one another with water during the festival which symbolizes washing the bad luck away. I was hoping the Vancouver rain wouldn’t act the part as we sat on the patio (thankfully, it didn’t).

The Cold Snap, which was my favourite was more easy drinking between courses and during our appetizers. I’ve always been a fan of more crisp and cleaner tasting beer and I really enjoyed this one. It was also perfect for the great amounts of seafood we were tasting.

Our first course is fresh oysters. It’s served with a chili and lime sauce and with a shooter! Oysters are always a win in my books – I didn’t notice it on their menu online, but I’m assuming it’s available for just about anyone. What I really loved was the chili sauce, Thai food was meant to be enjoyed spicy and this gives it the right kinda kick. The Samuel Adams Cold Snap complimented this dish really nicely, as it was lighter and complimented the flavours rather than overpower them.

The shooter that accompanied the oyster was interesting, it was not tangy or gritty but very refreshing and unique in taste. I have never had anything that tasted like this.

Our next dish is the Jalapeño Shrimp and Crispy Fish. The jalapeño shrimp was one of my favourite menu items of the evening – simply because it was a gigantic jalapeño stuffed with shrimp paste.

The jalapeño served as the perfect vessel for the shrimp paste (which was flavourful and not too salty), also giving it a nice mild heat.

The crisp fish is breaded basa fillets with a homemade mango sauce. Crispy, crunchy on the outside and enjoyable.

Before our next dish, we had a very cool surprise – an authentic Thai dance. These two ladies were very beautiful and graceful!

After the dance, they came around with perfumed water and applied them on our faces, here’s Brian enjoying his hah (Thanks Nickie for the great photo). 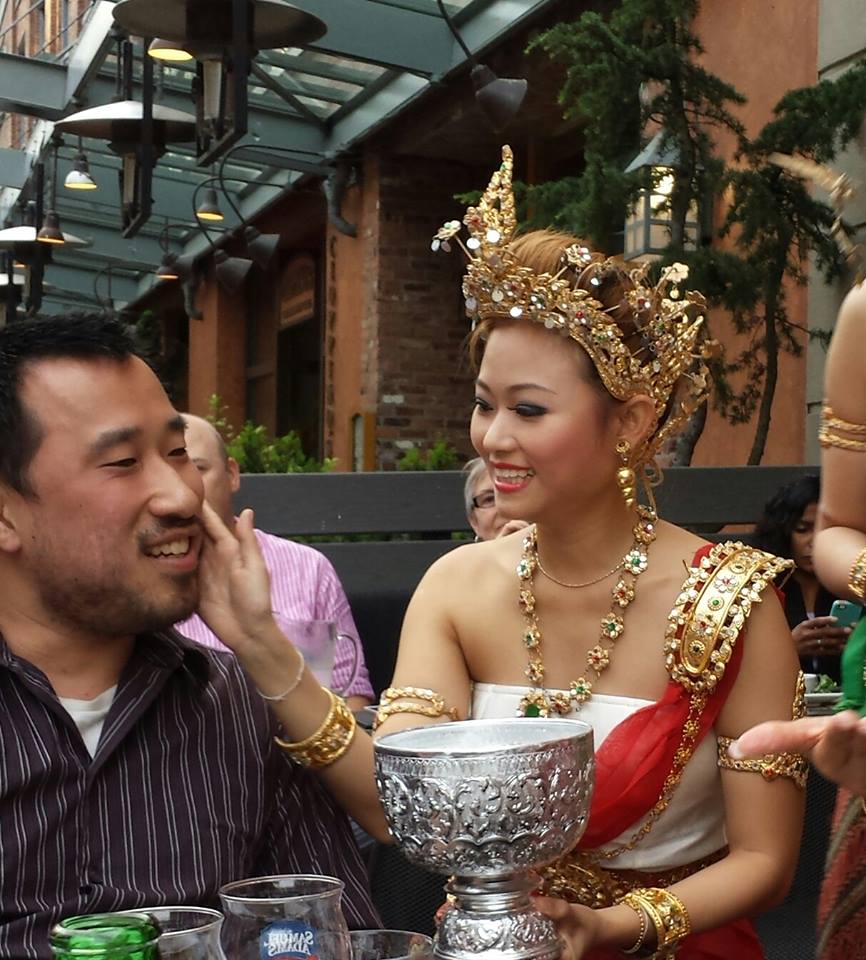 Onwards to our next dish the Avocado Roll and Spicy Soft Shell Crab.

The avocado roll is made with (you guessed it) avocado, mango, lettuce, onions and fresh basil drizzled in a homemade mango sauce. This roll was nice and refreshing, a great appetizer to start a meal.

On the other side of the plate was the spicy soft shell crab. It was marinated and breaded with beer and served with spicy apple shallot sauce. There are only so many places that I will eat soft shell crab and this has made it to one of my favourite places to enjoy it. The breading was nice and crisp but the sauce served alongside it really brought it to another level.

Tom Kah is cousin to everyone’s favourite Tom Yum. I can’t decide which one I love more, but this Tom Kah was chock full of flavour and seafood. The coconut milk broth is made with galangal, lemongrass, kaffir lime leaves and mushrooms. If you find Tom Yum to be a little too acidic for your tastes, try the Tom Kah. Very enjoyable. From here onwards, I felt that the Samuel Adams’ Boston Lager paired much better with our dishes.

Our next dish had a lot of wows from the table – the BBQ Jumbo Prawns. I’m not quite sure where they’ve dug up these prawns but jumbo is an understatement – these are huge. Served with a delicious tamarind sauce which gave the prawns a sweet but sour taste. Tamarind is used in Filipino cooking too, so I loved the pairing.

The Red Snapper and the Curry Powder Crab were served at the same time. The red snapper is deep fried and topped with Urban Thai Bistro’s signature three-flavour sauce. I didn’t get to ask what these three flavours were, but wow was it ever good. I can’t say I’m a huge fan of fried fish, although my parents cook fried fish fairly often – but this one was delicious. It was nice and crispy on the outside with that powerful flavour and still nice, moist and meaty on the inside.

The Curry Powder Crab is sautéed with dry curry powder and milk, egg, onions and bell pepper. A lot of my friends enjoyed this dish as it went pretty quick! The Samuel Adams Boston Lager really complimented this particular dish as both the dish and the beer were bold in taste, but not overly so that one overpowered the other.

We also got to try the BBQ Duck which is topped with their house sauce and served with a chili sauce and saffron rice. I am so used to the Chinese preparation of BBQ duck but this could give it a run for it’s money. Tender, juicy and succulent. Another crowd favourite. With duck, either beers worked well with it – or maybe it was just me because I usually associate beer with BBQ! I feel if I had to pick from the two, I’d choose the Boston Lager to go with this slightly heavier dish.

We were also served the Spinach Fai Dang, another popular Thailand dish. It’s stir fried with chill and garlic sauce and was a welcoming addition to our fairly meaty dinner!

Finally – our dessert. What is a meal without dessert? We were in for a treat this evening – deep fried mango ice cream. Two of my favourite things combined into a dessert. The outer shell is crispy and warm and then you dig deep into the middle and get this cool, refreshing taste of the mango ice cream. It was so wonderful, I wish I could have it more often.

I’d like to thank all my friends who came out to enjoy this great meal and experience with me, Urban Thai Bistro for their hospitality and Samuel Adams for hosting this great dinner.

Disclaimer: I was invited by Branding and Buzzing to host a Samuel Adams x Urban Thai Bistro dinner. All photos (except the ones noted) were taken by Justin Lam (Three Sixty Media) and I was paid to write this post. However, all opinions are and always will be my own. 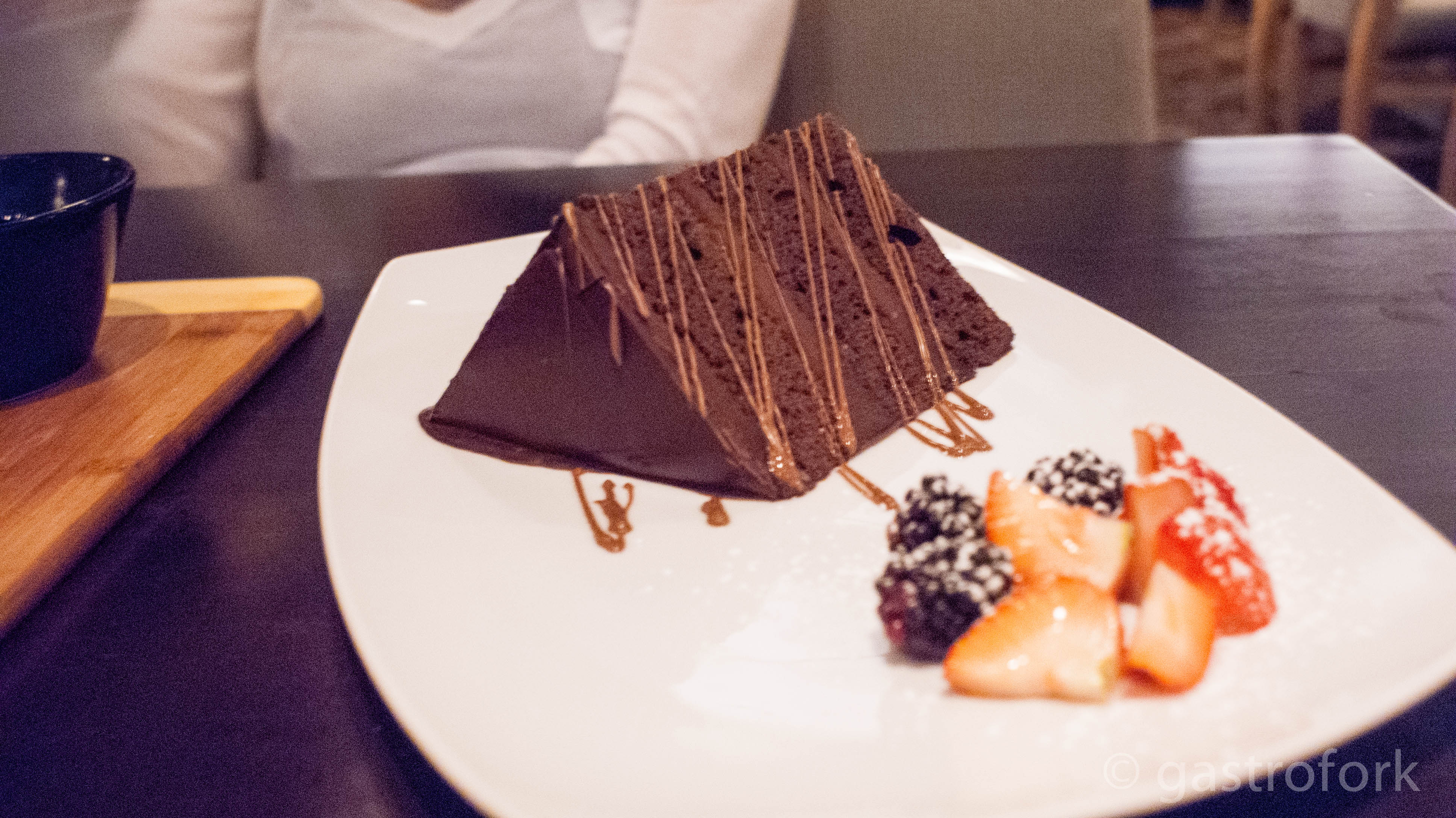 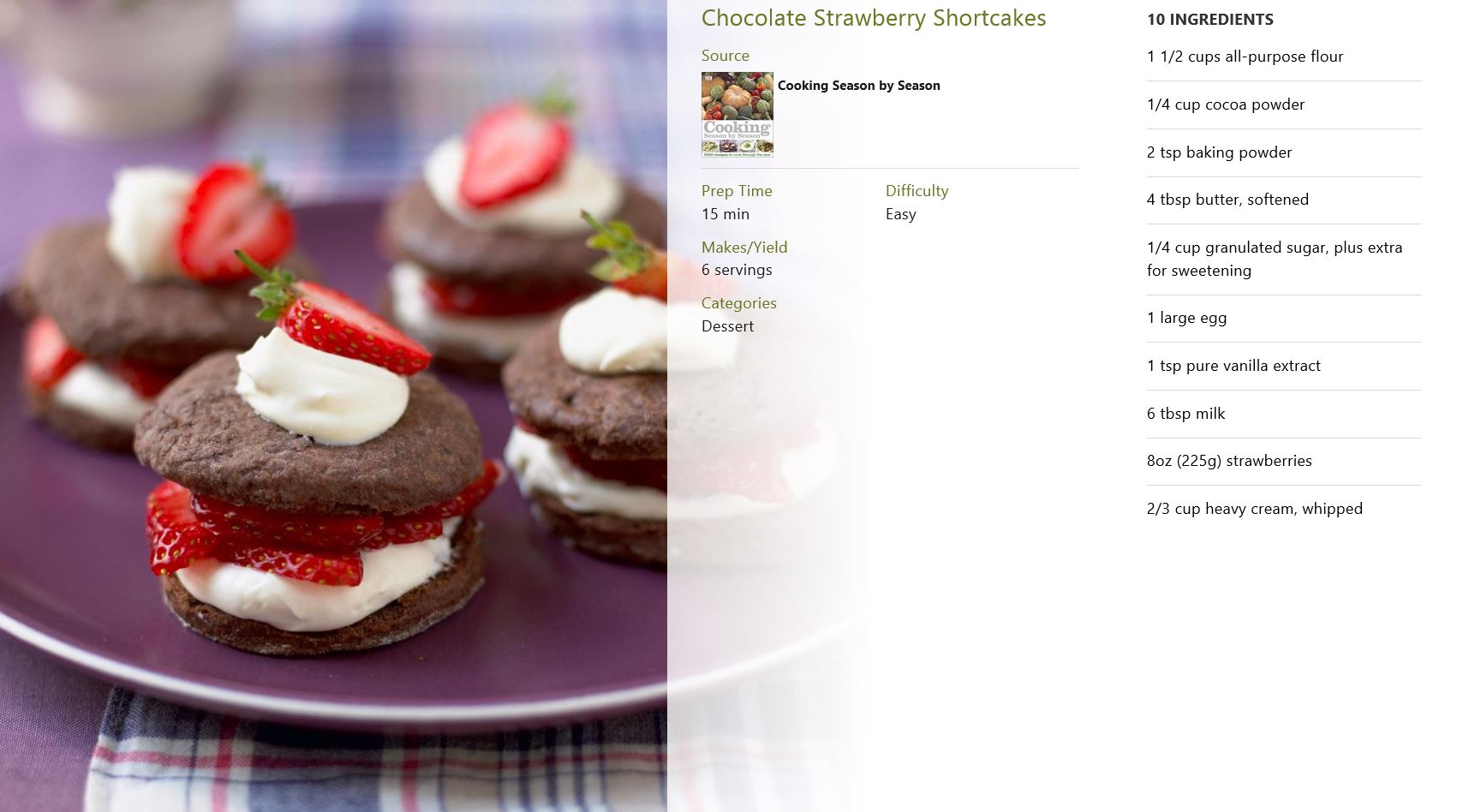 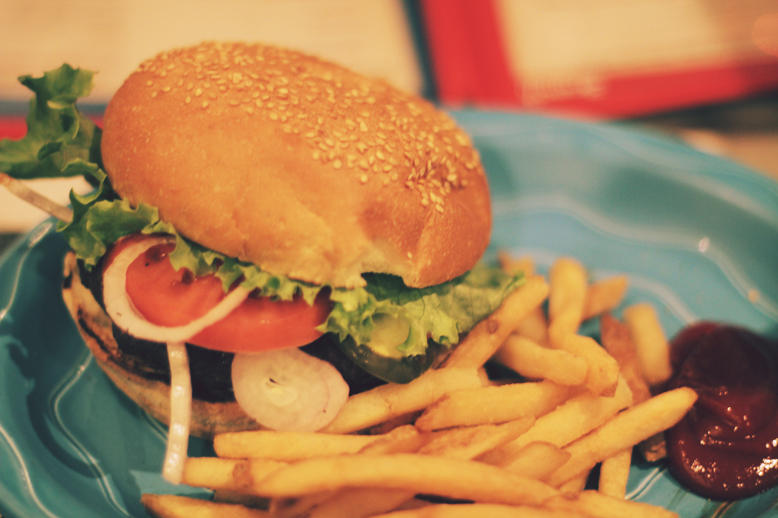 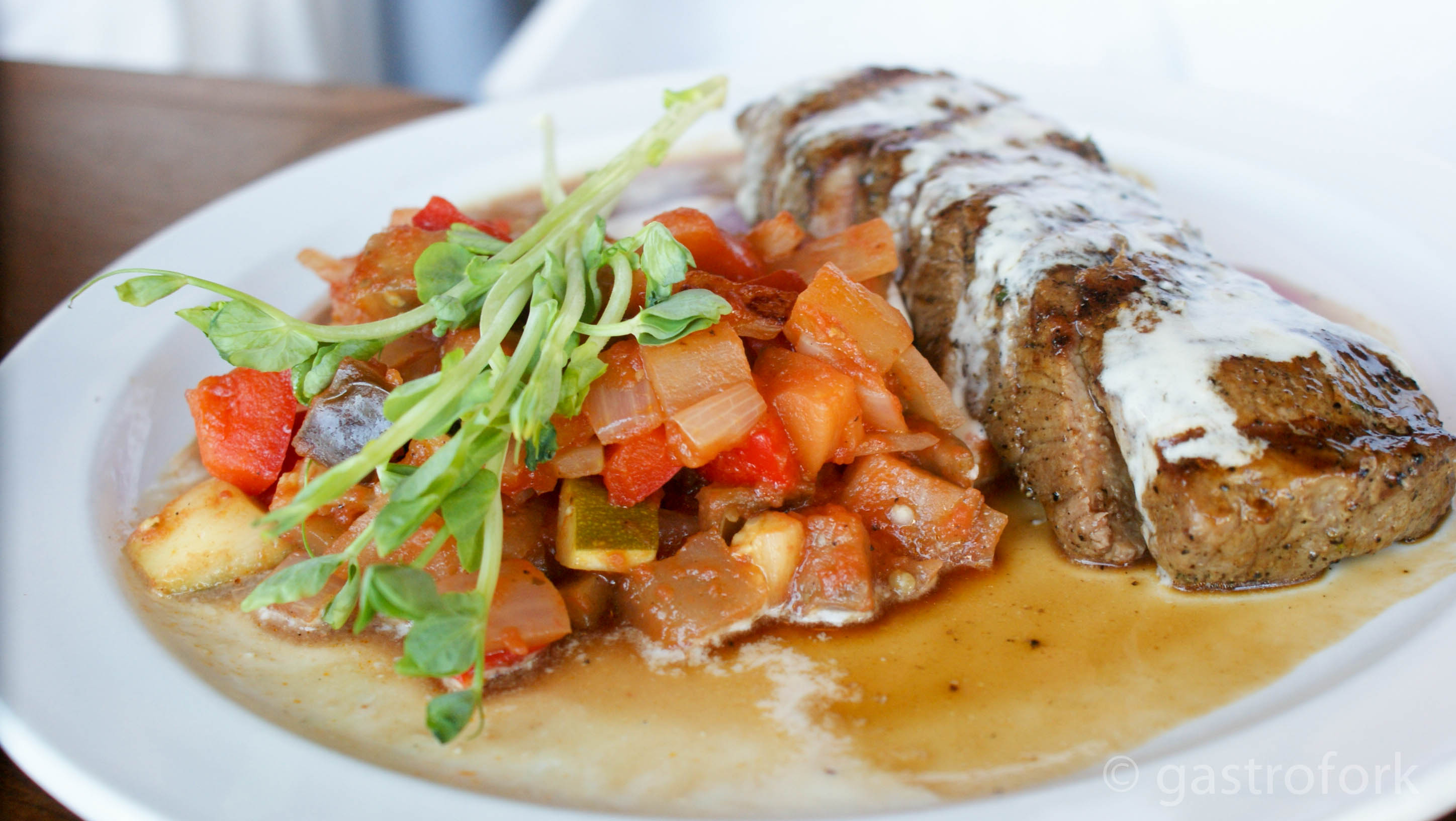