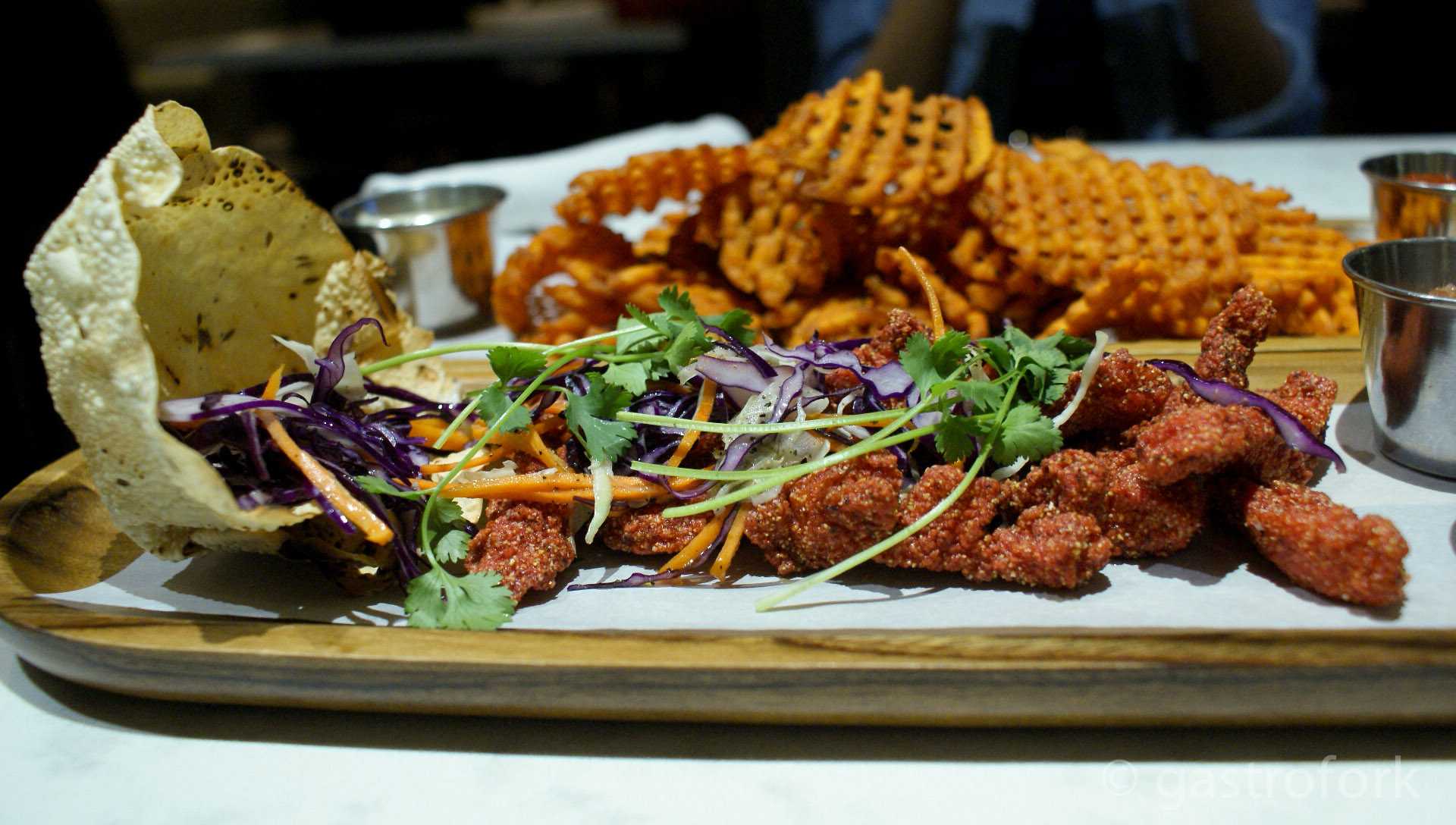 As a Richmond girl, I can honestly say that unless the occasion is very special, I would never leave Richmond. One of the few things that entices me to hop on the Canada Line to downtown Vancouver is for the lounges and social houses perfect for a fancy night out. When CAVU opened inside the Hilton, eager to be my Richmond solution to sleek, contemporary dining, I just knew I had to try it out! 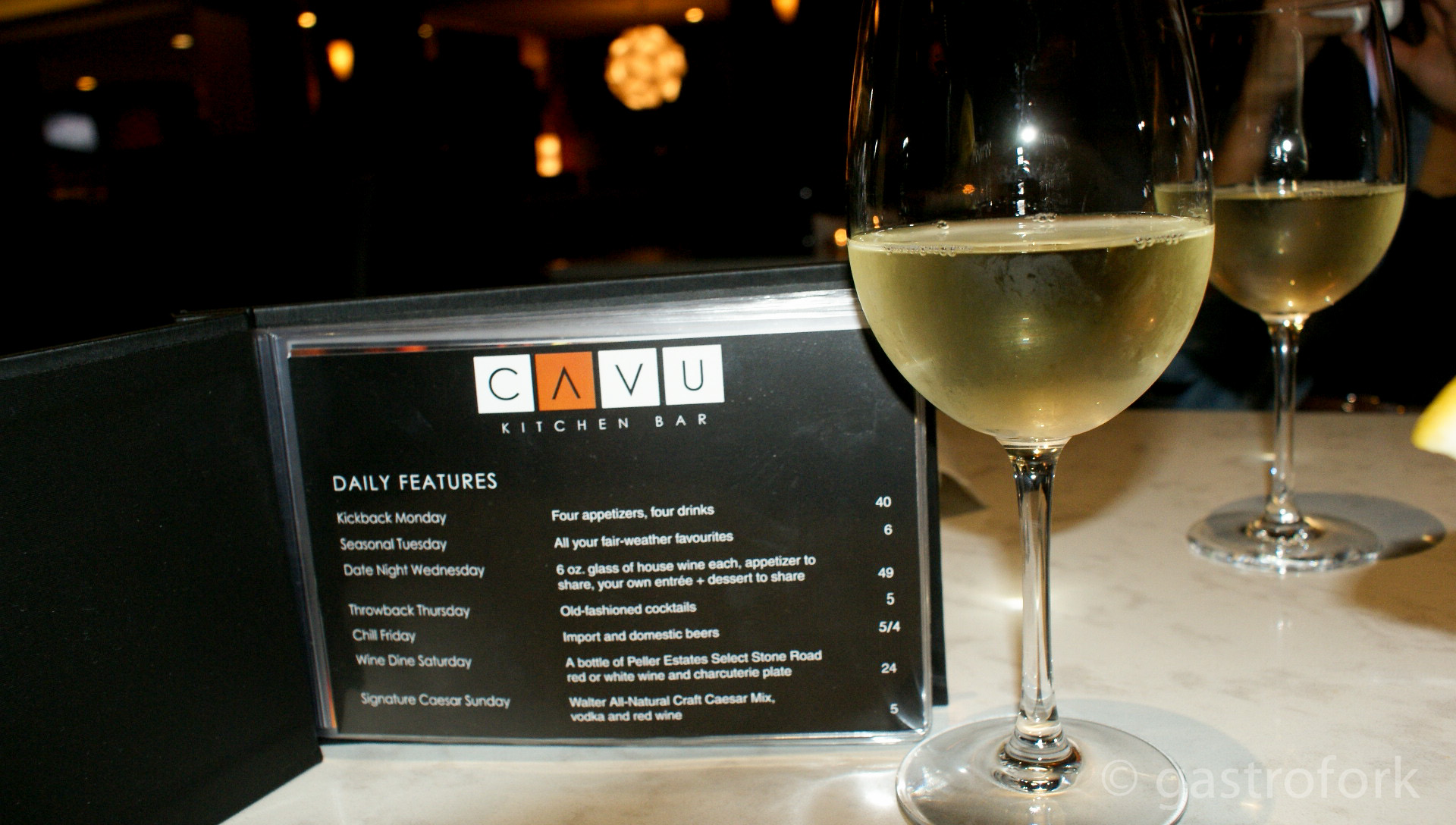 I was greeted with live music and offered either domestic draught beer or wine for $3.50, CAVU does a promotion every Thursday which also includes free appetizer samplers as well! My friend and I opted for a glass of Peller Estate Stone Road white wine, sipping and talking while a local singer Jade sang jazzy versions of top 40 songs. The restaurant changes up the acts every month, always supporting local artists which I thought was a nice touch. 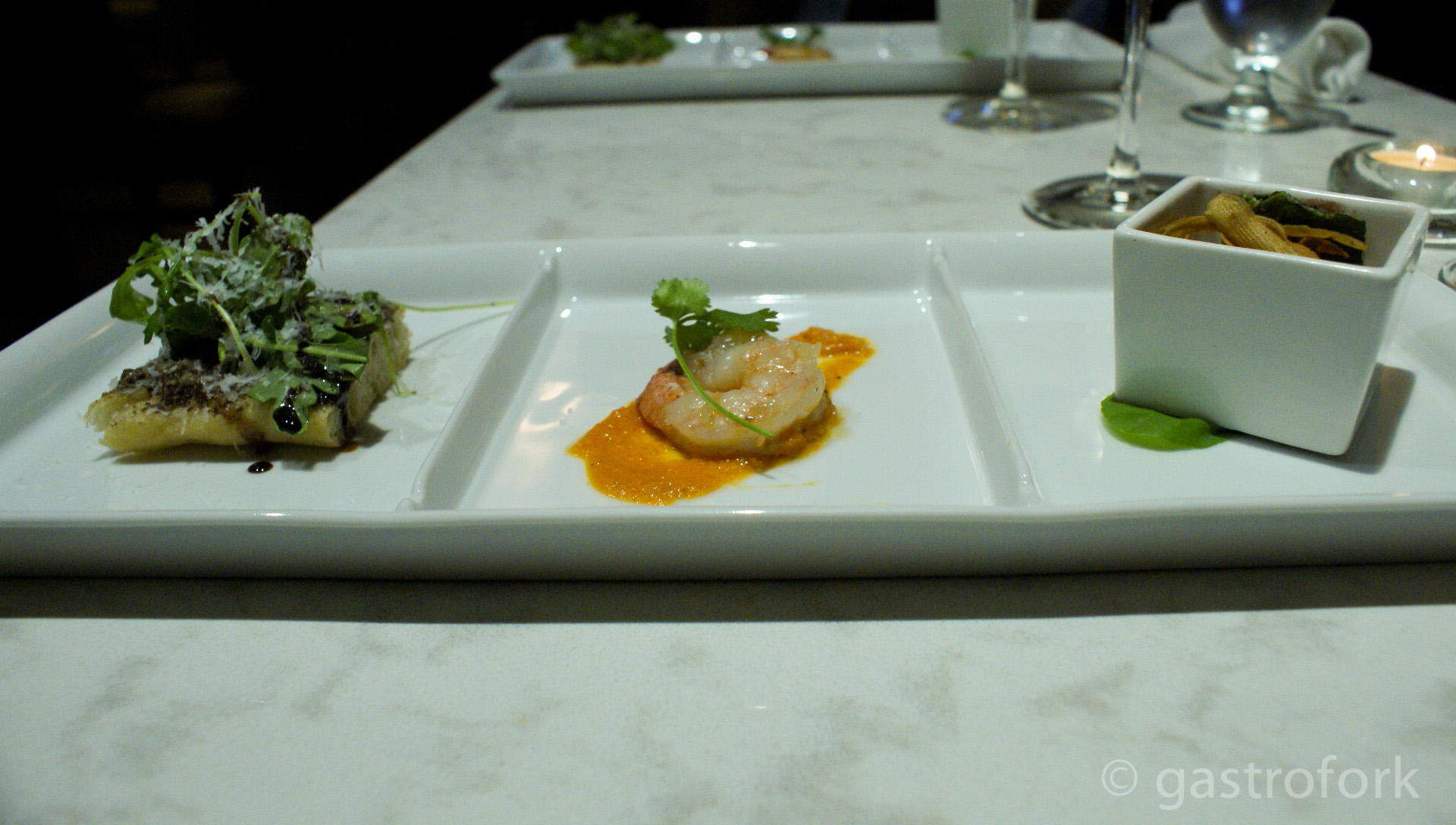 We started with the appetizer sampler, they switch it up every week just to keep it fresh, but everything can still be found on the menu if you feel like having more. Our trio included a beet and veggies medley salad, shrimp in fish stew sauce and flatbread with a sweet balsamic vinegar on top. I’m usually not a fan of beets (they’re weirdly red and taste too sweet and I don’t trust them) but they put just the right amount in the sampler that I actually enjoyed them. I wish I got a little more fish sauce with the shrimp (and some rice with it too, which I noticed they had as an entrée on the menu), but the flatbread was perfect just the way it was with its ratio of topping to bread. 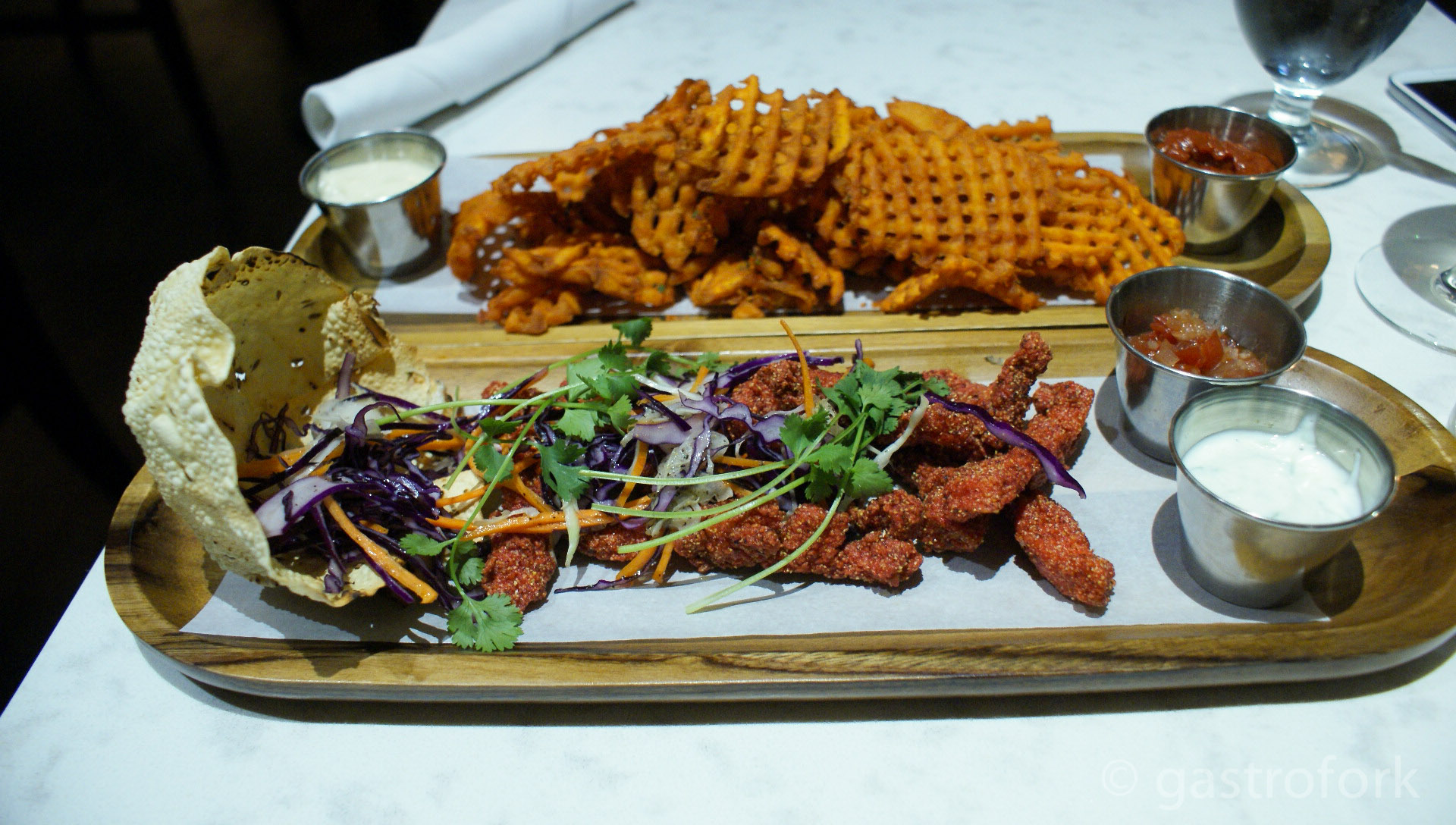 Sous Chef Edison came out and told us that the aim for CAVU is to provide familiar food with their own spin on it, thus we were presented with yam waffle fries and Tandoori calamari. I don’t know about you, but more than half the time when I order yam fries at restaurants, they usually turn out way too soggy, or just not crunchy enough for my taste. By turning the yam into thinner waffle fries, I guess they were able to fry more surface area so the yams were crunchy and didn’t feel as greasy as I would expect. This was paired with a in house sesame mayo and kimchi ketchup. That kimchi ketchup is what’s worth talking about. It had just the right amount of heat, but it would only last as long as the bite, so by the time you swallowed it the heat was gone and you were ready for more.
The Tandoori calamari was definitely an interesting take and not too chewy which is my concern with calamari most of the time, so if you’re a lover of squid and are tired of the same old things, I would say this is a good alternative to try. 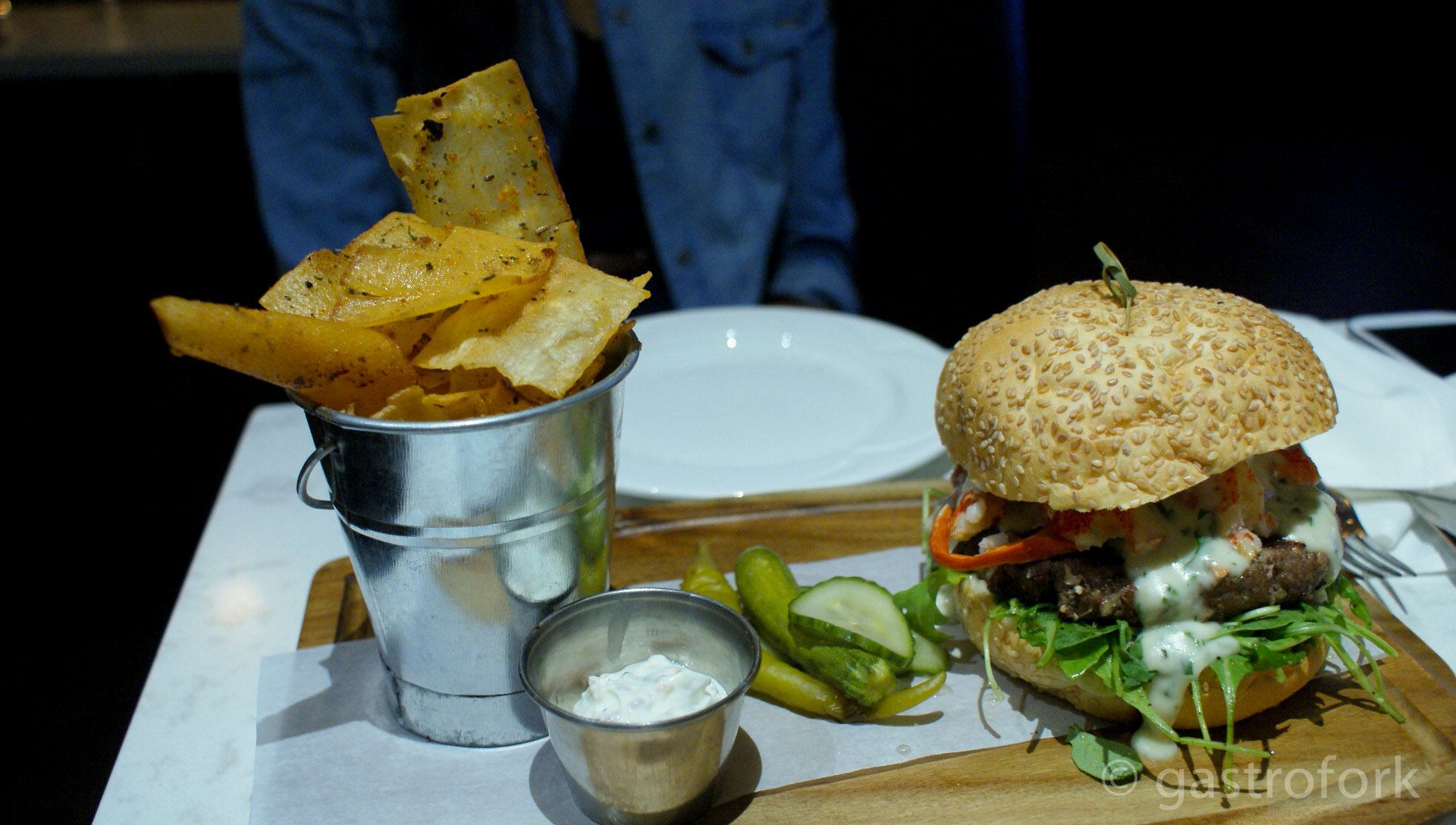 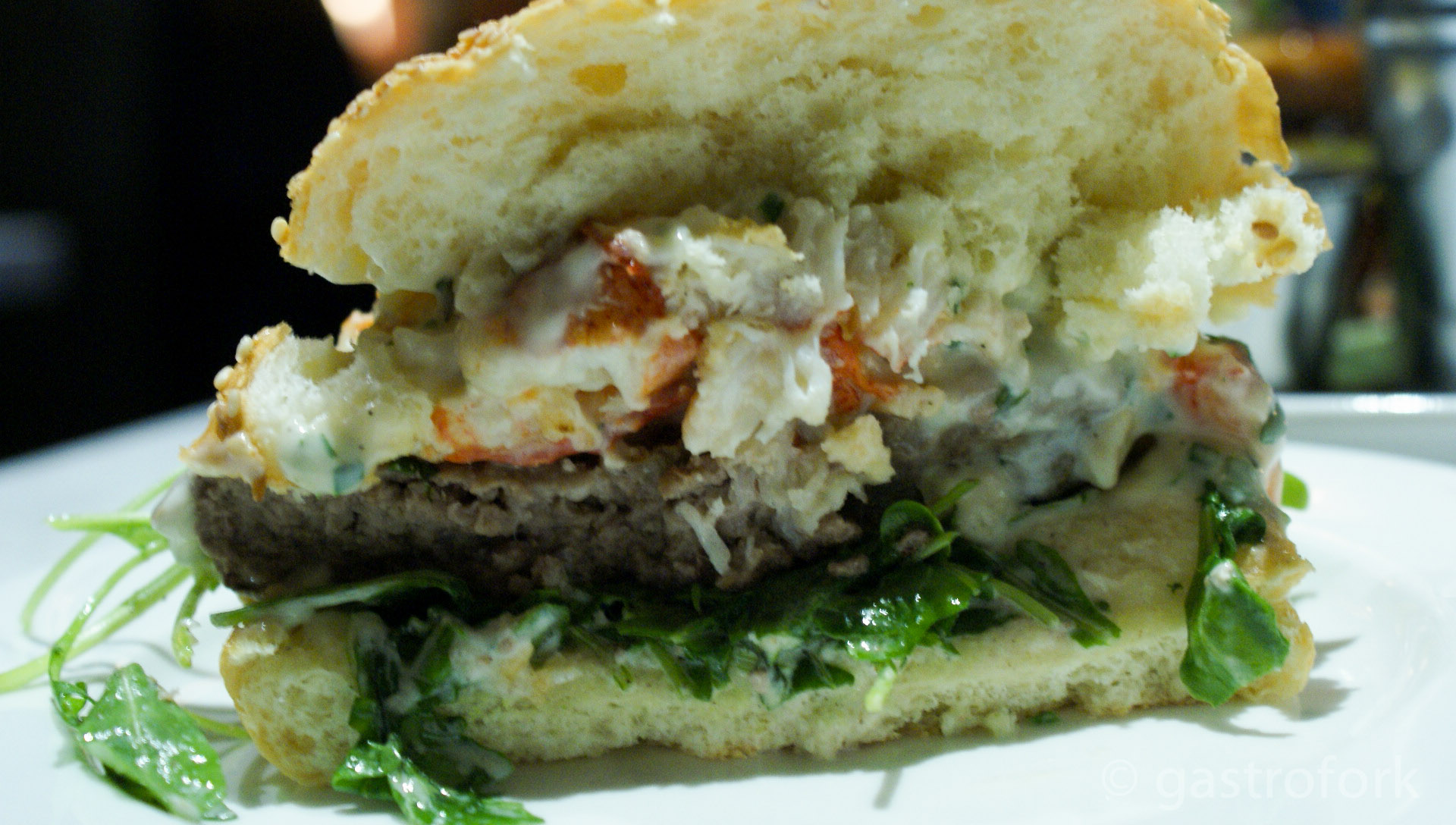 We moved on to the entrées, a lobster and beef burger with CAVU chips and apple cider gastrique ribs with jalapeno cornbread and yes, more CAVU chips. The burger was a nice surf and turf in one burger, they aren’t stingy on the lobster meat and that beef patty was definitely juicy. Chef Edison told me that the patty is made for them specially and the seasoning is also their own recipe. Even their pickles are made in house! 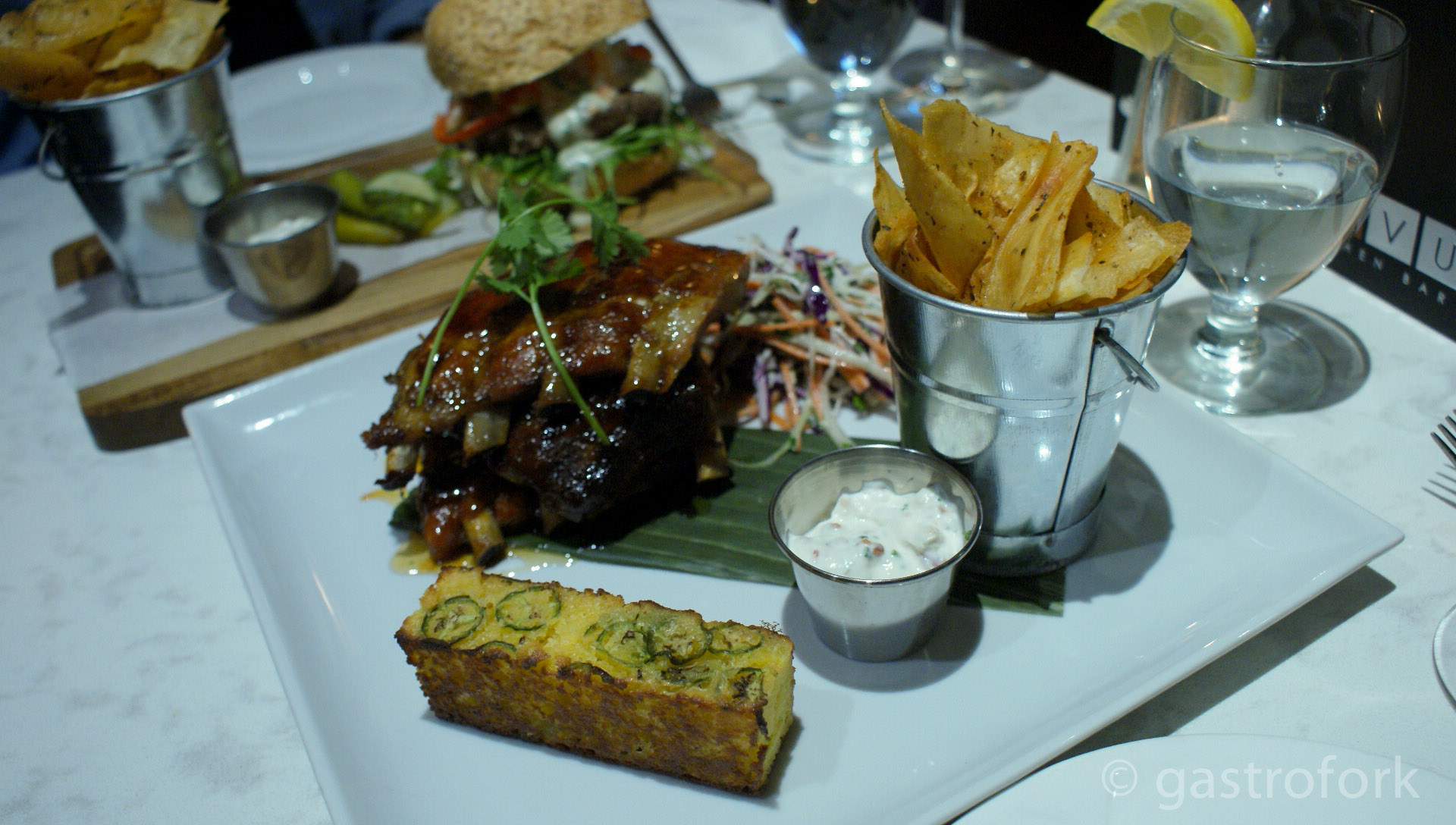 The ribs were fall off the bone and delicious, but the jalapeno cornbread stole the show by being sweet, crunchy on the outside and soft on the inside, while providing but a TOUCH of heat (for those of you who love the spice, you will probably not feel anything and think I’m crazy, but the heat is there just mild I tell you!)
Last to talk about is the CAVU chips, something I have fallen in love with and hoping they will sell in bags soon. These yucca chips were so crunchy and addicting, mainly because it was like chips but something I don’t normally get, thus wanting it more. Combine that with an in house bacon aioli and you got a perfect bar snack. 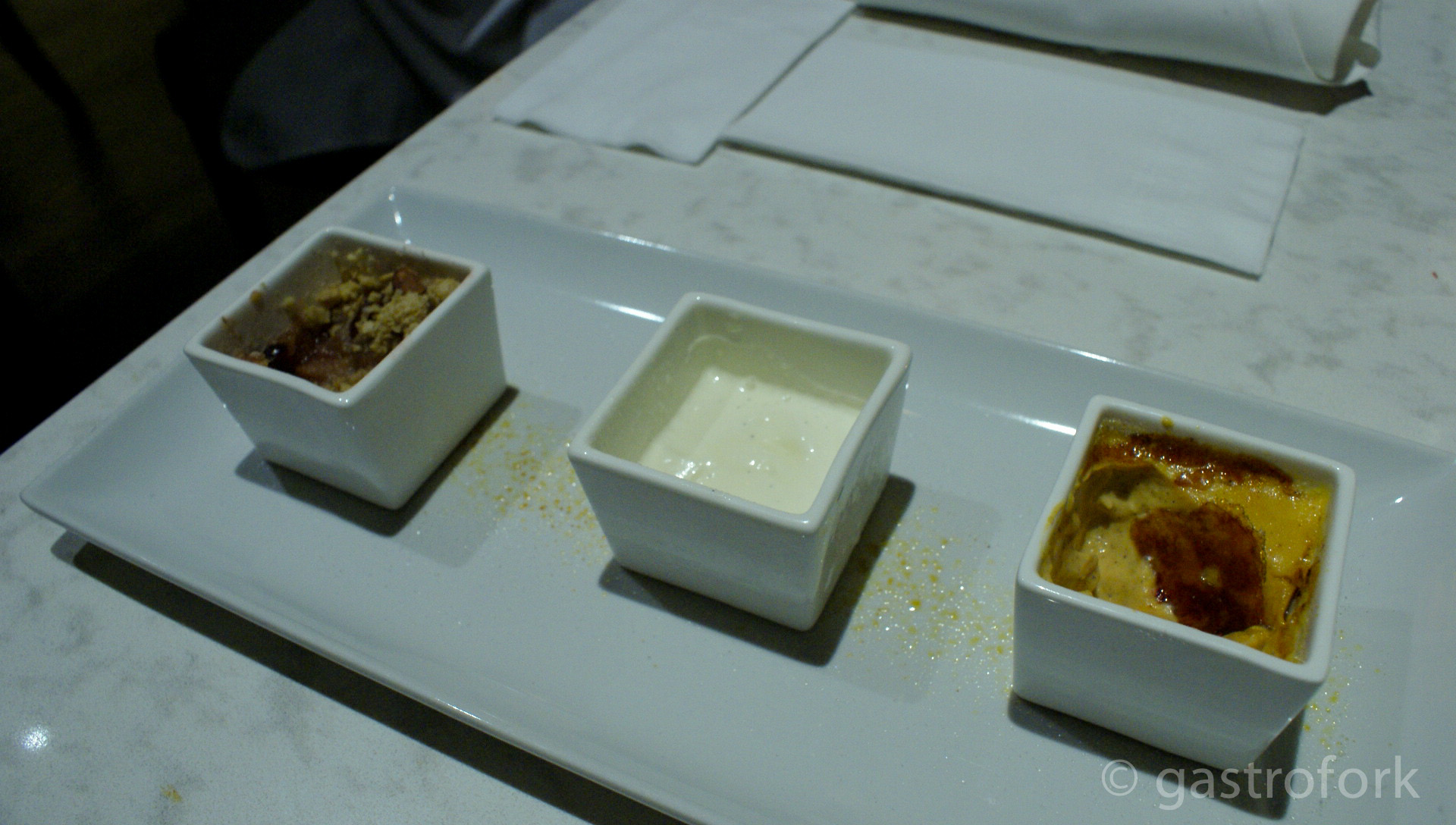 Last was dessert (we saved room for this) and I actually really like their set up. All of the desserts are in small portions, perfect for ladies who just want a little something sweet to end the meal, and for a relatively cheap price of 3 desserts for $10! We were given a sampler of pumpkin crème brule, apple and rhubarb crumble and Mario’s Gelati vanilla bean ice cream. The ice cream was not in house but because everything was so delicious I forgave them. 😛

From my brief conversation with Chef Edison, it seems the kitchen staff gets a lot of creative freedom in terms of the menu which I’m glad for. The cornbread was actually a recipe from one of the chef’s grandma which I thought was adorable. I also appreciate that even as a hotel restaurant aiming to be a little more fancy, they kept the prices very reasonable. Knowing that they try to make everything in house definitely puts a gold star for them in my books as well.

CAVU is actually short for Ceiling And Visibility Unlimited, a term pilots use when describing perfect weather conditions for take-off, they came up with this concept as they were an airport hotel which caters to a lot of airline crews as well. I wish this restaurant the same fortune as their name, unlimited freedom to prosper and grow in the Richmond food scene. If you are looking for a nice little place to try, I highly recommend coming here.

Editors Note: Please note that Gastrofork was invited to CAVU and our meal was paid for. All opinions are our own. 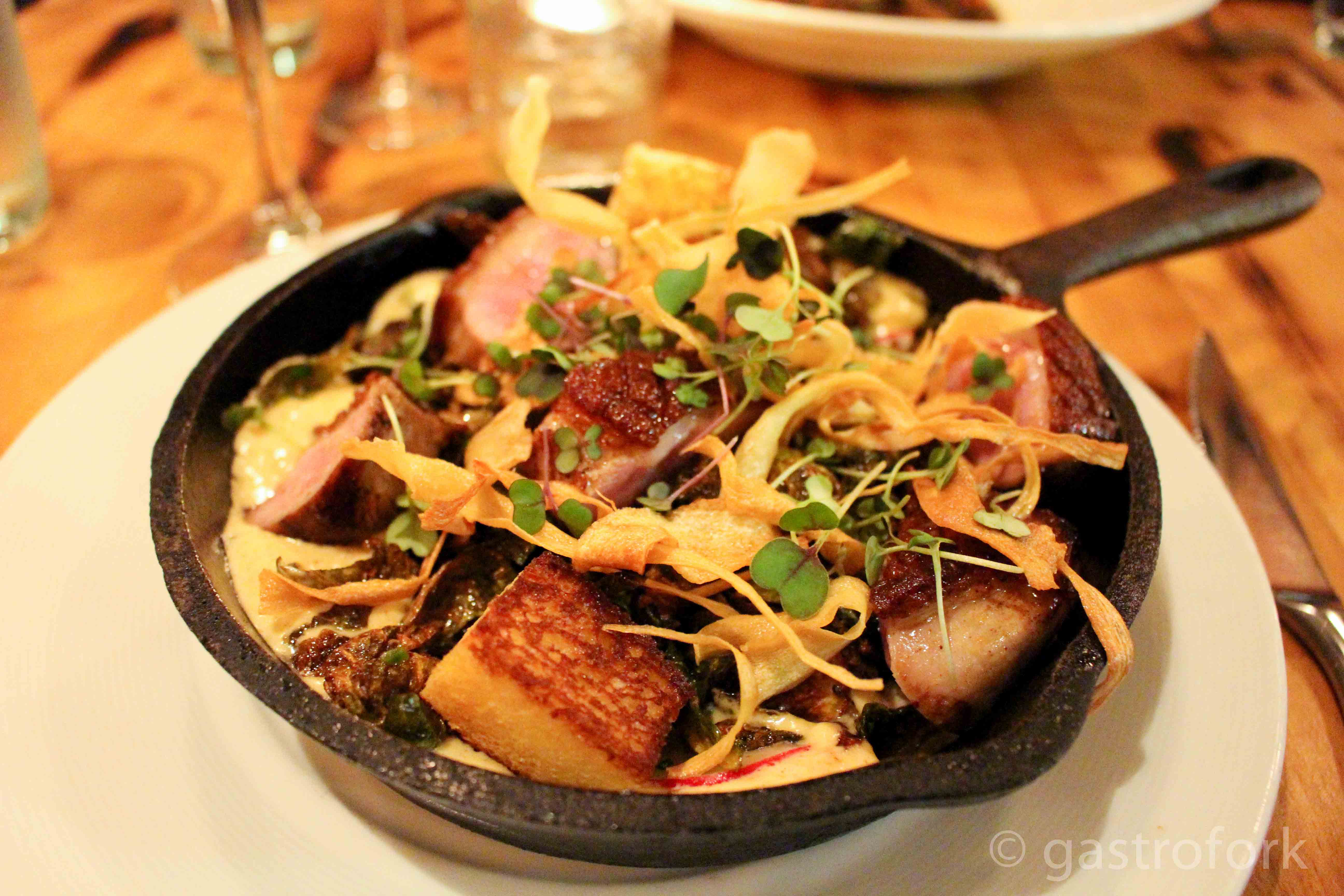 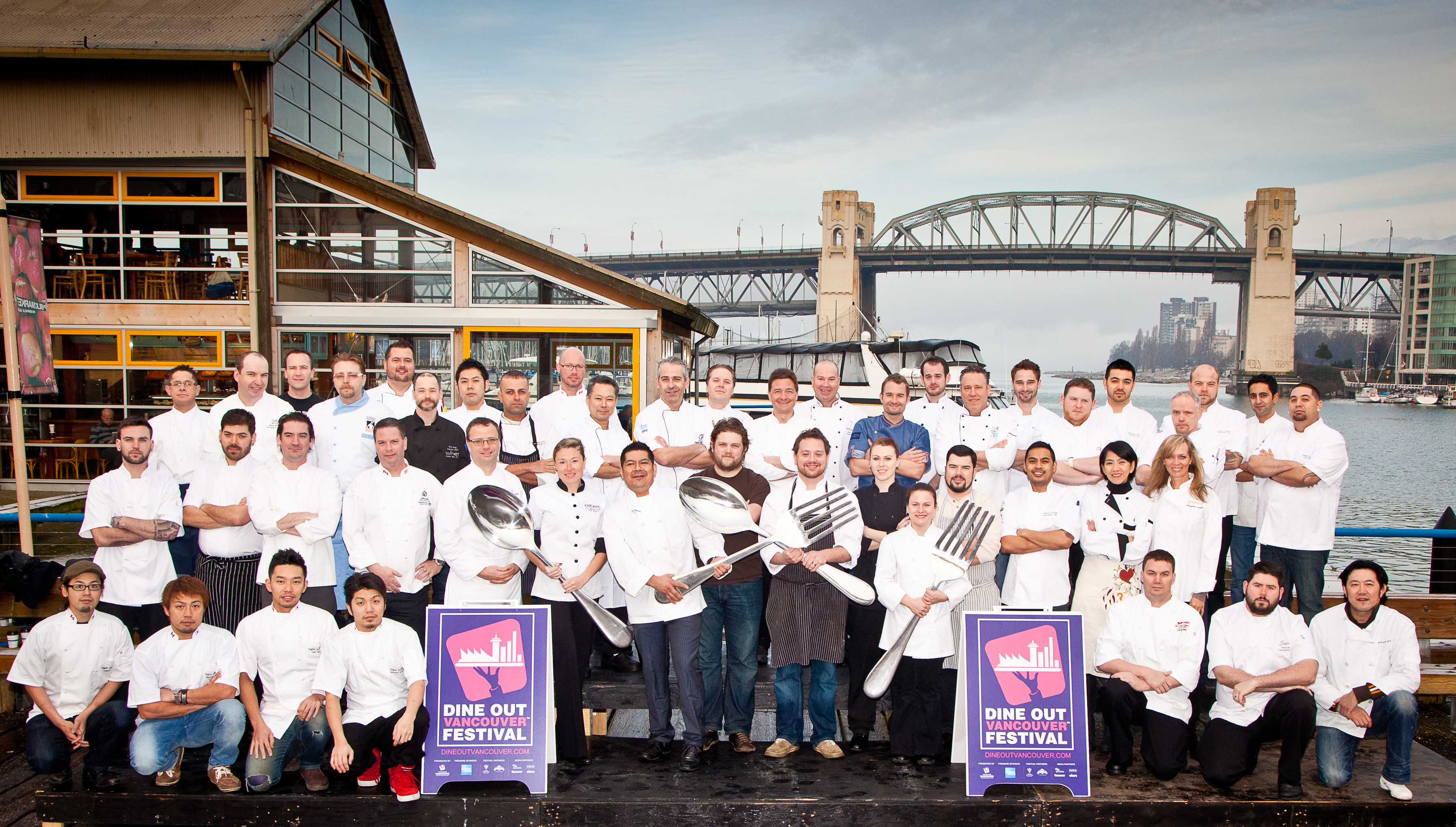 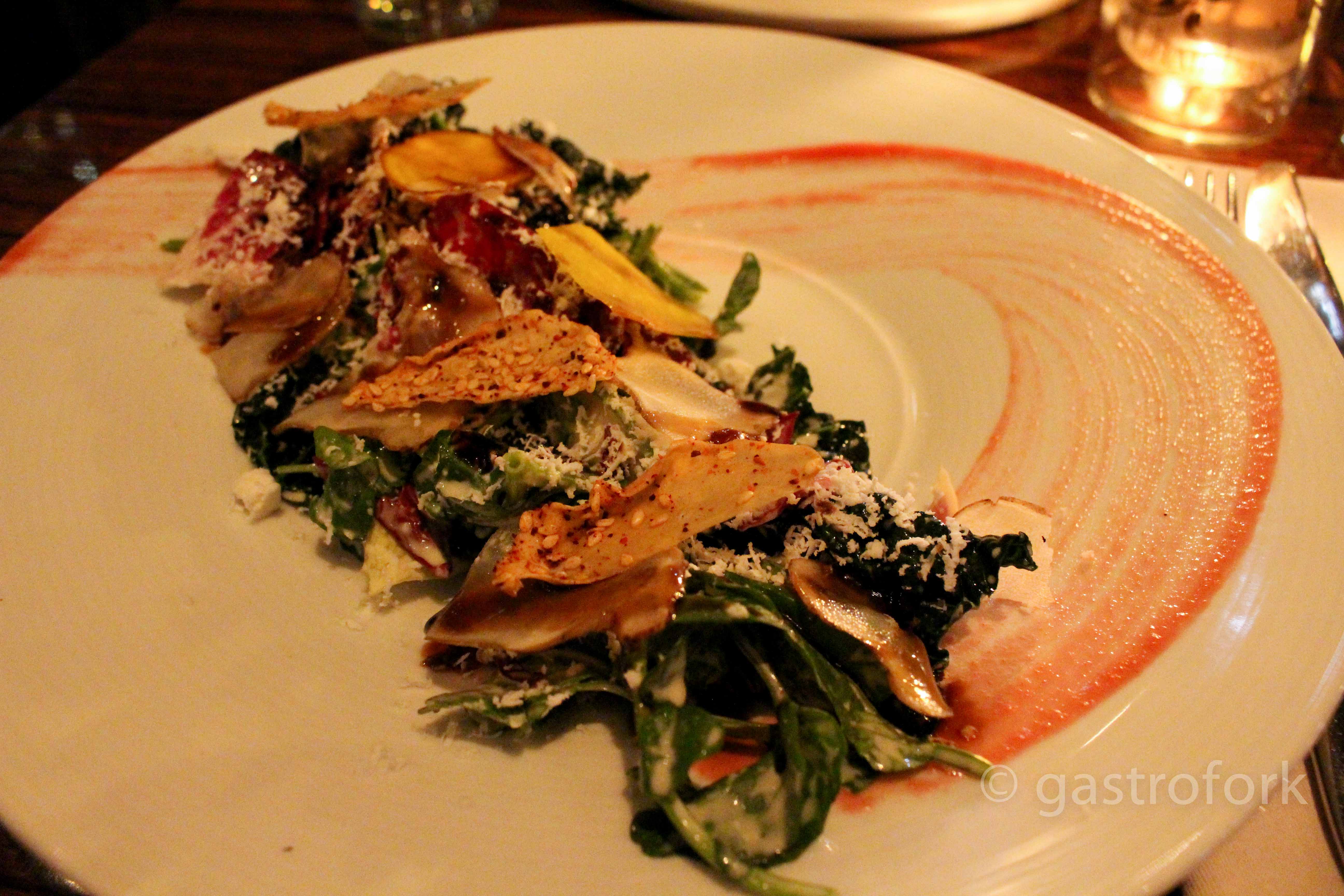