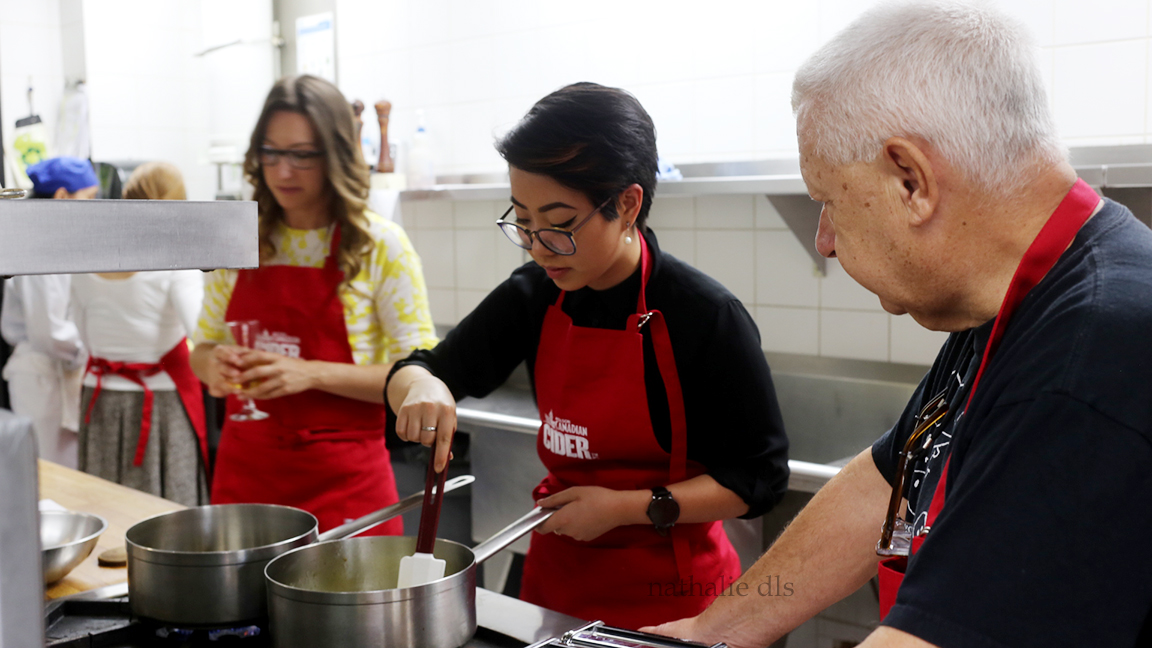 The Pacific Institute of Culinary Arts is nestled within Granville Island and is a top school for aspiring chefs. Last night, Gastrofork was invited to a class taught by Chef Julian Bond. The class also featured Molson Canadian Cider which will was implemented in the recipes. The cider was also the drink of the night, poured over ice and a wonderful complement to the dishes we made. 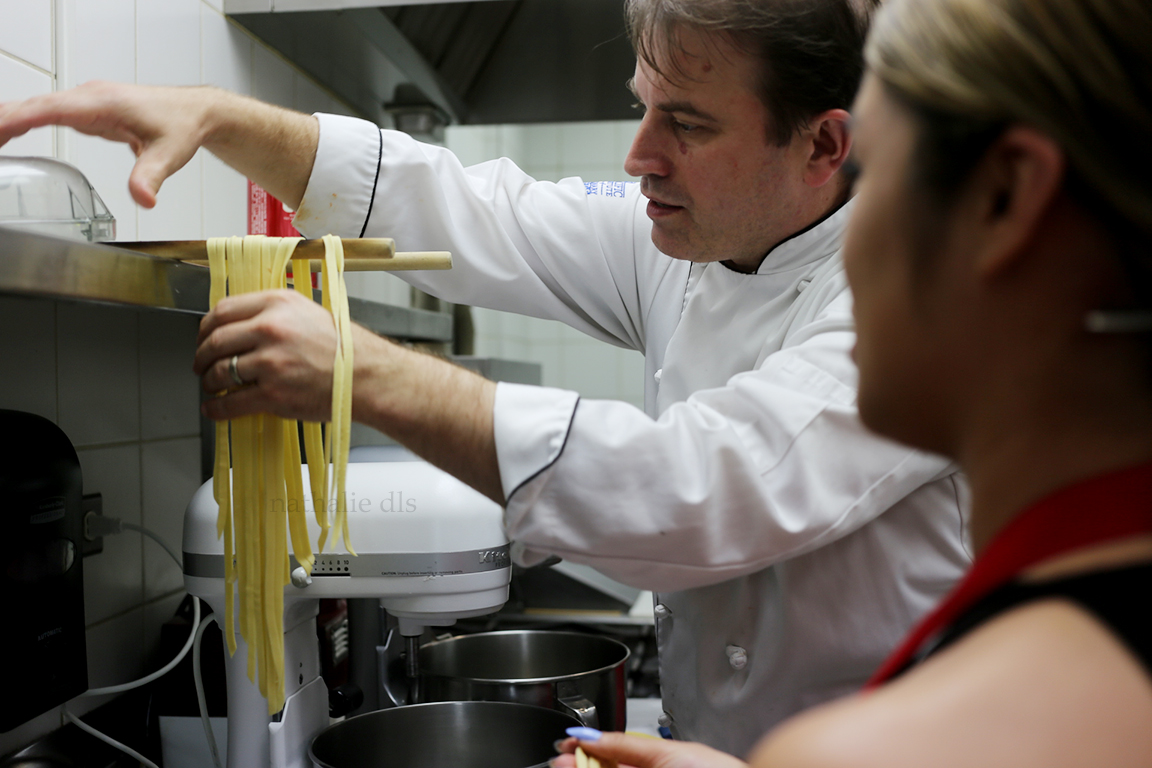 Chef Julian Bond and his team taught us how to make a couple dishes that evening. I was part of his class, as we were divided by two. I admire this man’s eccentric spirit. It’s half cooking, half comedy topped off with booze. What a great set up for a night. 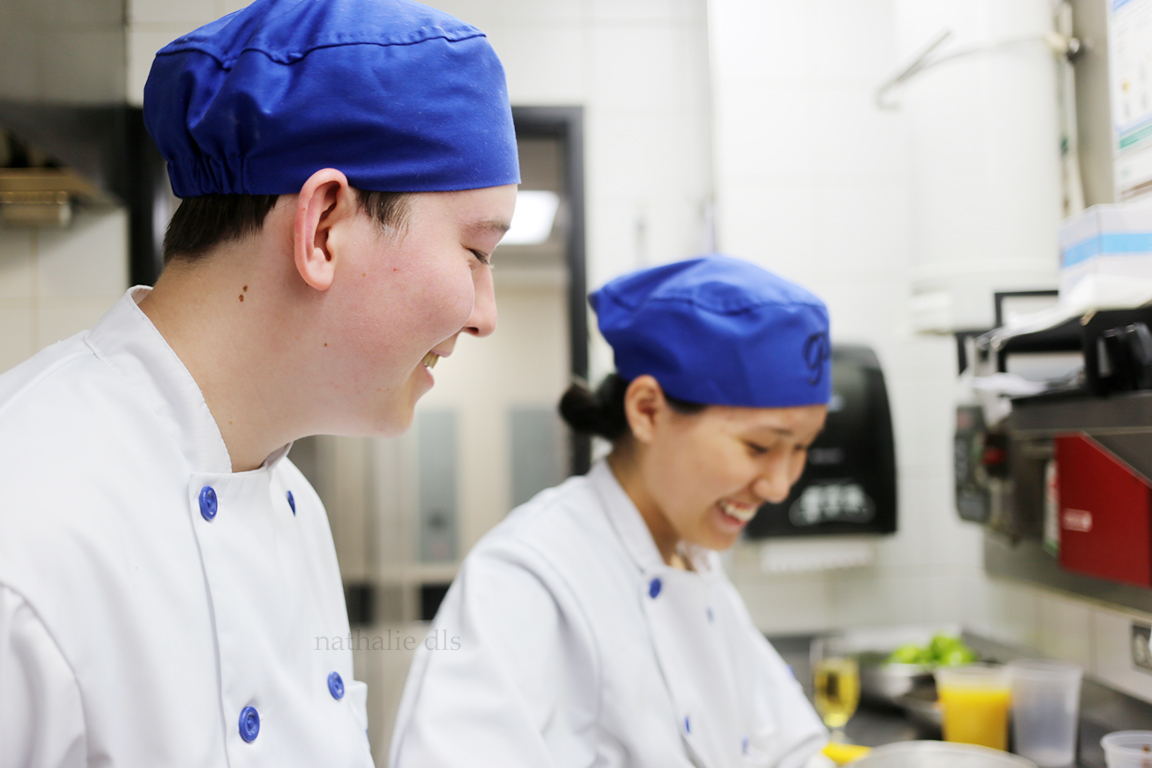 These two assistants and the others were miracle workers, helping us every step of the way. They definitely made the atmosphere of PICA an enjoyable place, while Julian told us jokes and tidbits of information. While some asked for them to complete their recipes, I noticed they would try to teach you the technique if you didn’t understand. I was watching them to see their techniques whether it was cutting or simmering something. 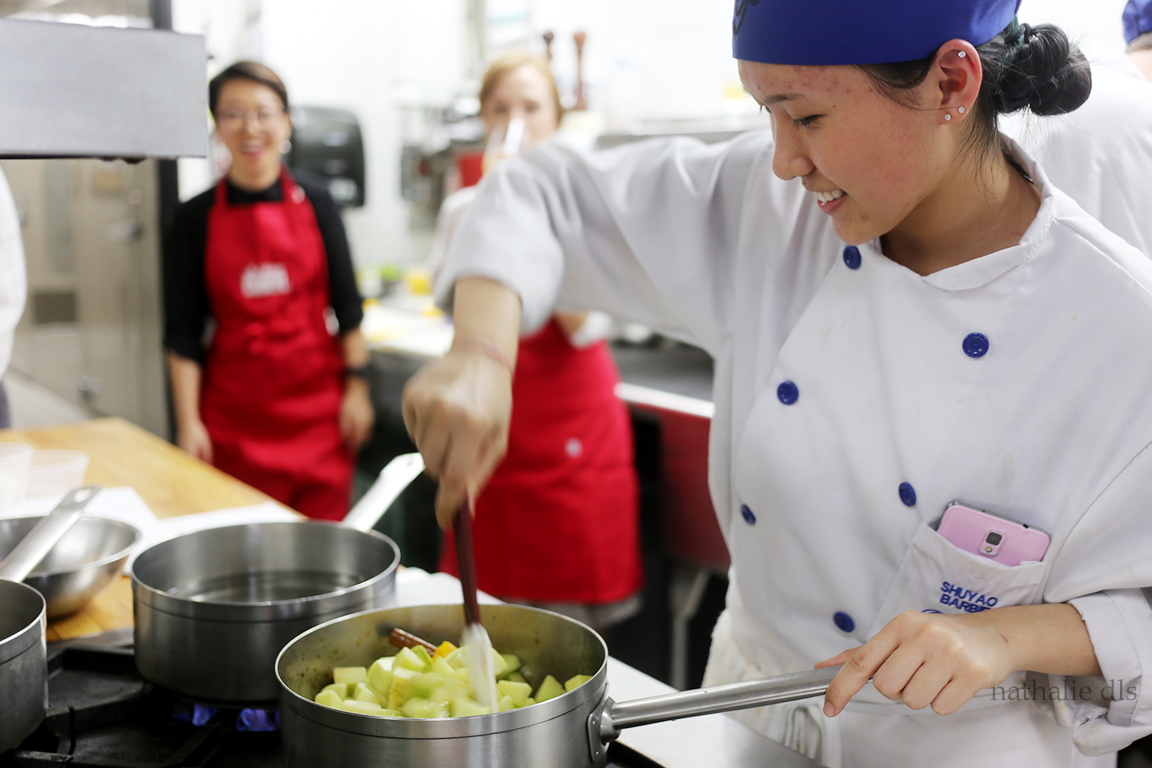 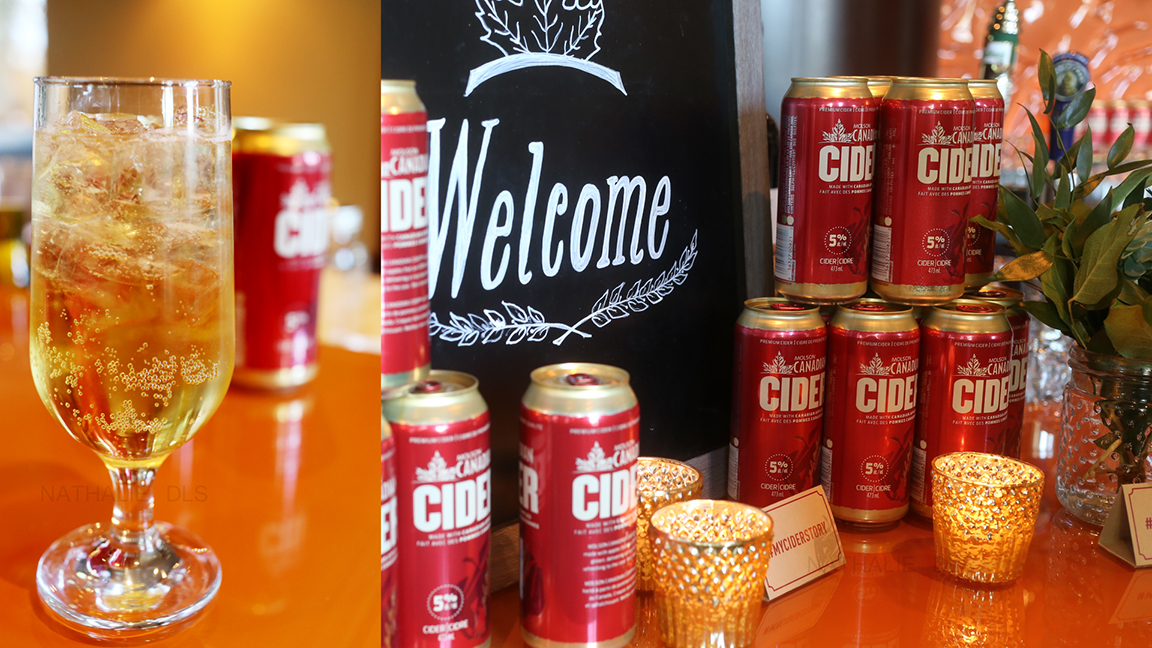 One of the brewmasters from Molson came to speak as well. Steve made his first beer at 16. He apprenticed his professors in the University of Guelph. He graduated, not finding much jobs, except a beer job which set him on a successful path eventually to Molson Canada. He spends each year now making products. He spent an additional seven years in brewing science. Cider making is a lot more like white wine making, he notes. “Think of a wine and a food pairing, you can pair cider with food as you would white wine.” Cider has carbonation and cleans the palate, like sparkling wine.

There was a pre-party with appetizers and live music. The spread for the table was fantastic as you’ll see below. 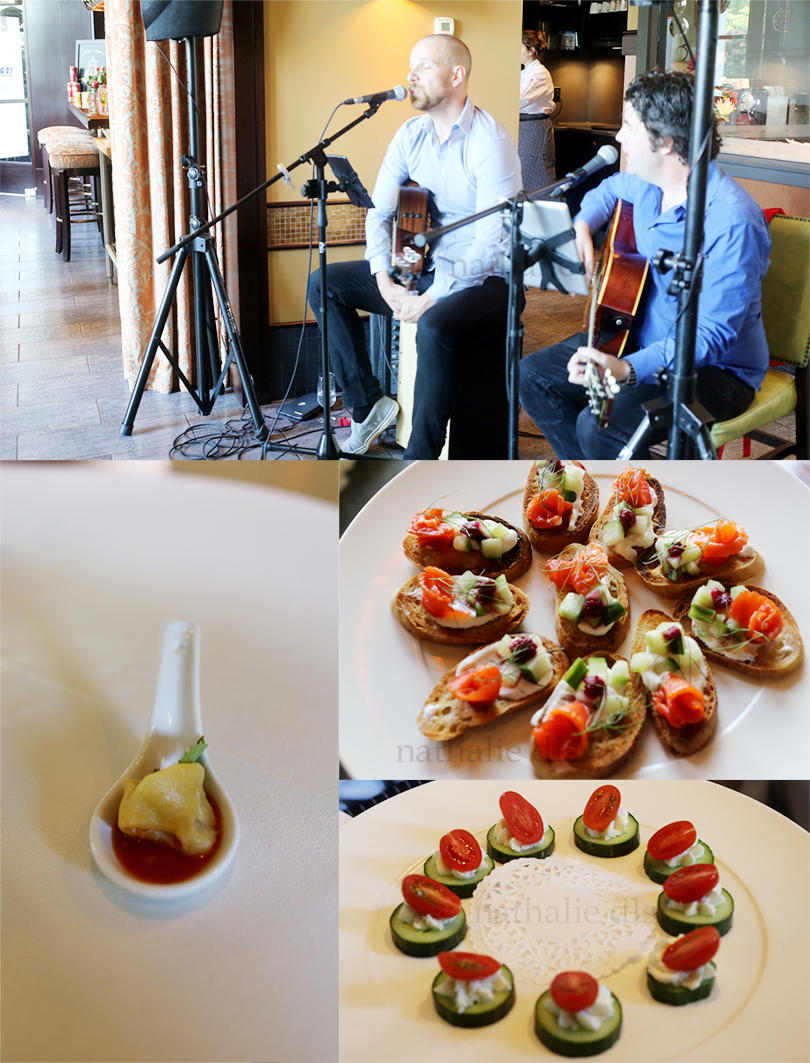 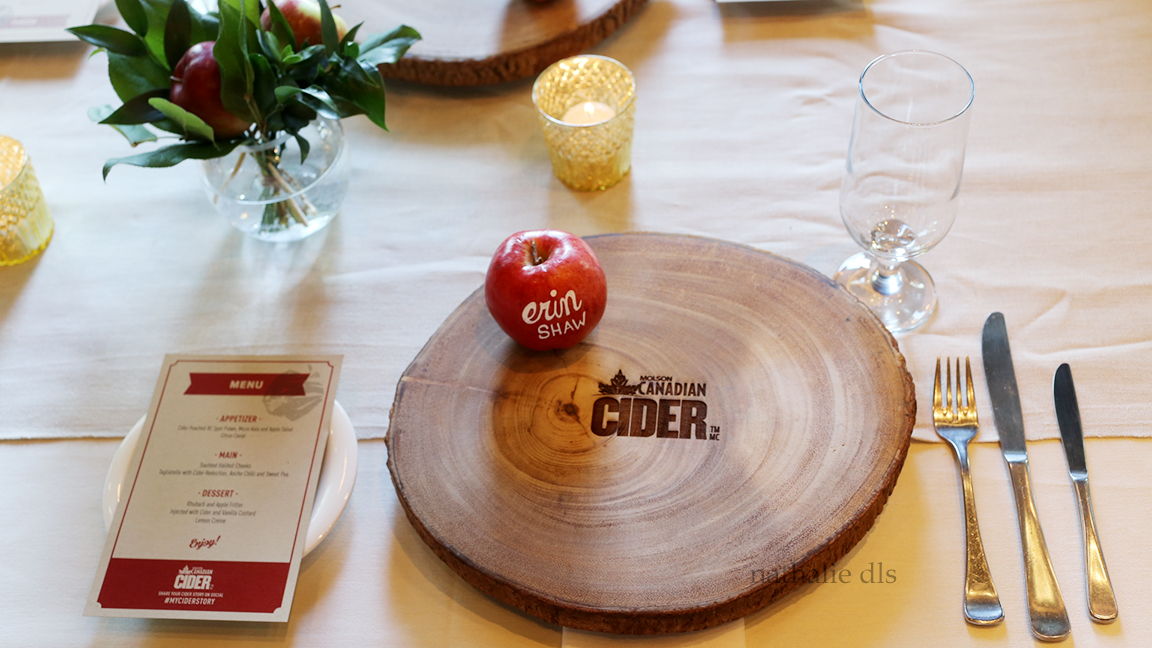 What a gorgeous table set up! The trees and wooden panels and the pops of red from the apples, I could cosy up over candle light at this quaint table. The names written on our apples was a nice and thoughtful touch. I know I can’t write as nice on an apple like this, so somehow this makes this impressive.

We started with a Micro Kale and Apple Salad with Cider Poached BC Spot Prawn and Citrus Caviar. We watched Julian cook this dish before our eyes, the shrimp were trying to escape from the bowl! Julian boiled up the cider and poured the hot cider onto the bowl of prawns. He told us not to boil them, but to let them sit in the boiled cider. He also taught us how to make a vinaigrette with cider. Get a mason jar, put 2/3s olive oil, 1/3 cider, pureed apple and citrus pearls, and you have the divine, refreshing summer dressing depicted below. 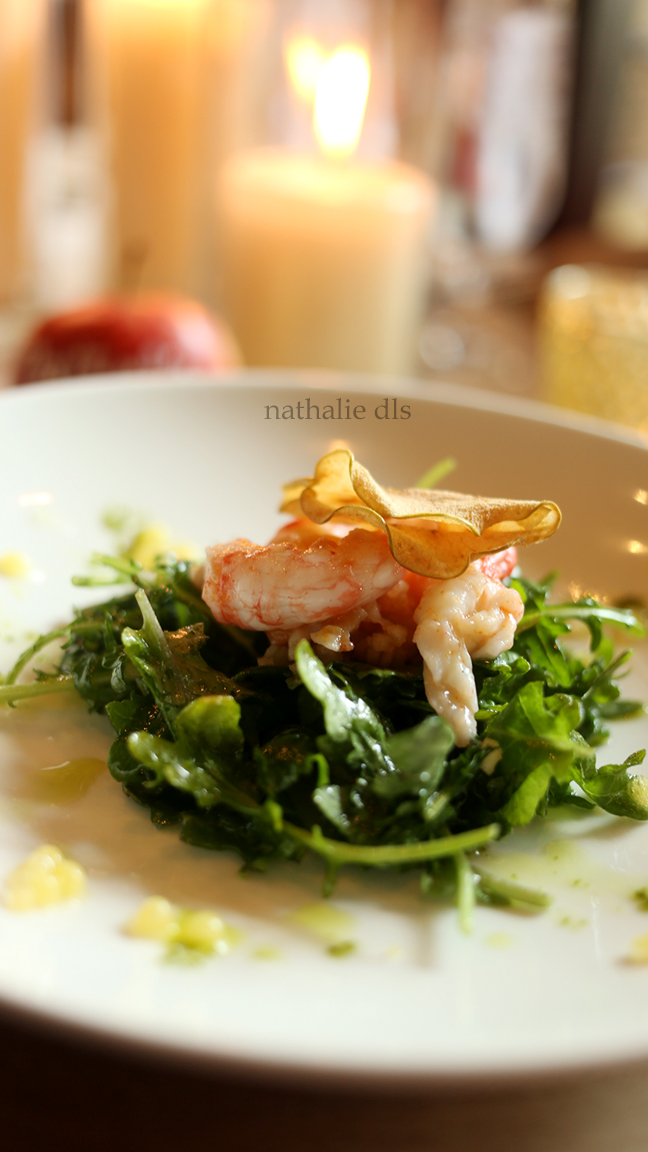 I made my own version of the vinaigrette, which is a much simpler, easy to do version. It tastes no where near as good as Julian’s recipe, but it works if you don’t have citrus pearls for instance.

Place all ingredients in a mason jar and shake!

The cooking began after our appetizers! We made satueed halibut cheeks, tagliatelle with cider reduction, ancho chili and sweet pea and for dessert, rhubarb and apple fritter injected with cider and vanilla custard with lemon creme. 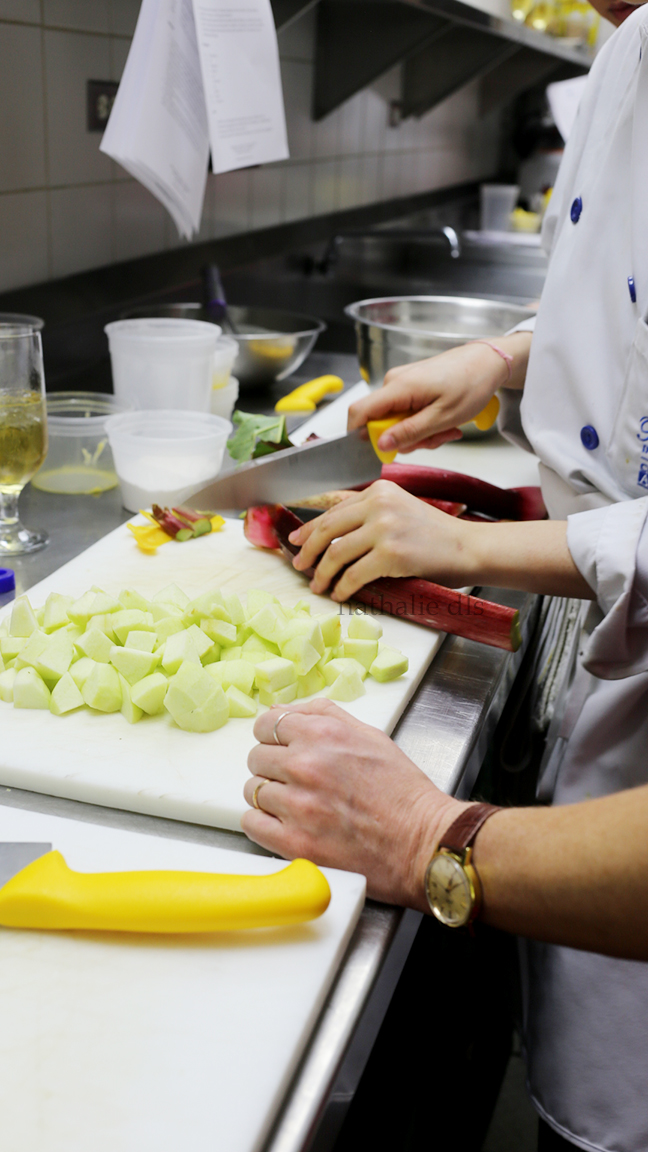 It was a little chaotic for me to work in a kitchen with so many people. I’m a little bit more introverted. The last bit of the fritter batter I had to entrust in the hands of the assistants because my lab partner and I didn’t understand the last step. I ended up on halibut cheek duty. I can successfully say that the Chef complimented the last two I got to fry. Wahoo! I learned. Sort of. 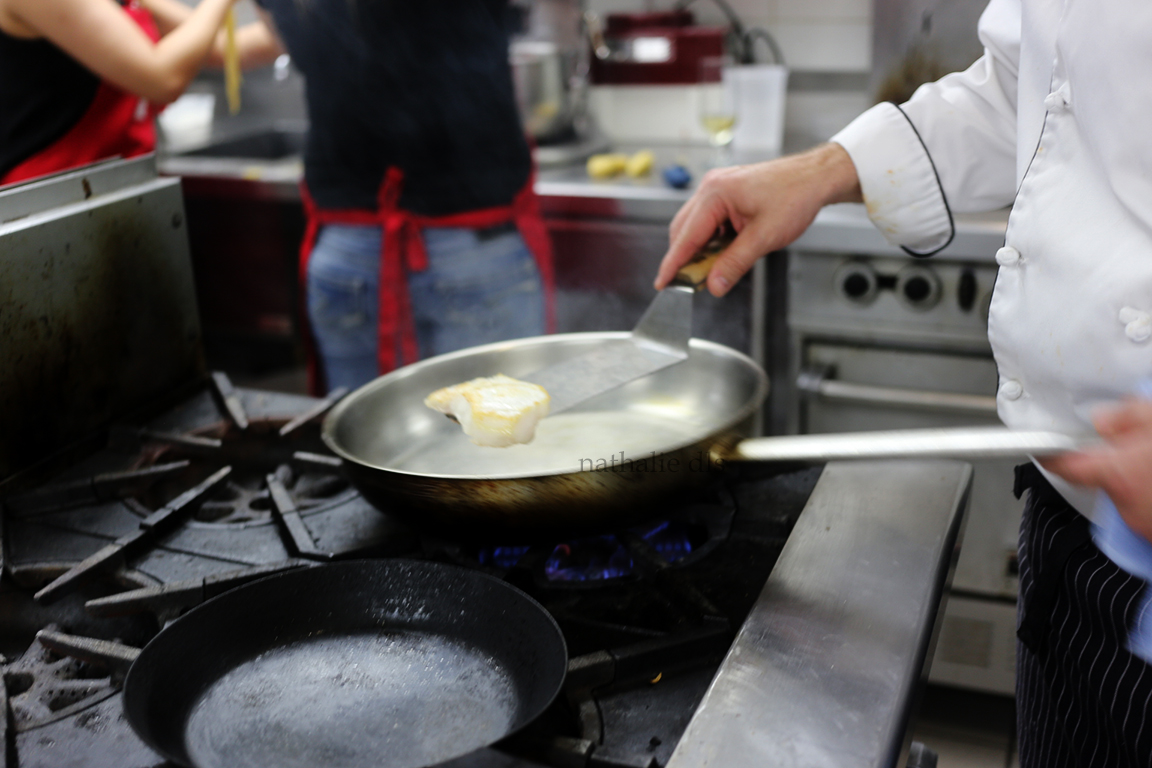 These were our final dishes dressed up by the PiCA team. Not too shabby, considering we probably messed up some of the dishes! Definitely a team building experience. 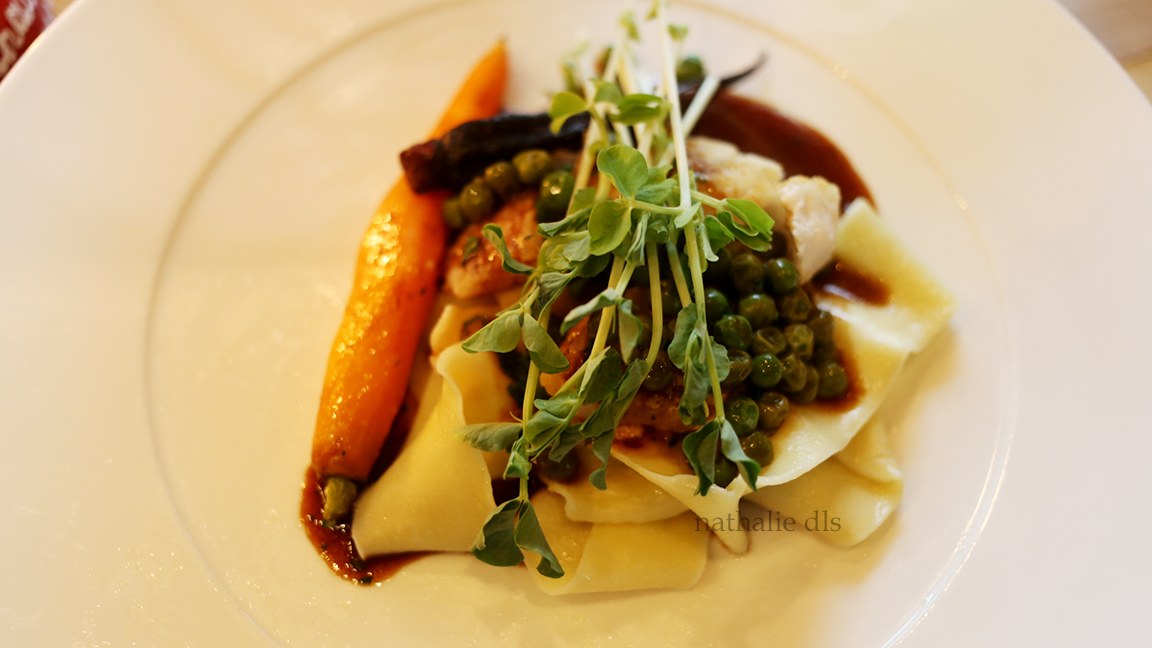 The Cider itself was fantastic on ice. We had an earlier conversation about how we should try heating up (bot not completely boiling) the cider so one could make hot apple cider from this drink. My impression of the drink is that it doesn’t taste like alcohol, which is dangerous for me because I can get drunk this drink fast in the summer since its sweet and light. I brought my goody bag of cider home to Josh, and viola, he drank all of it, except for the half can I saved for my vinaigrette. So there’s your target test market, my beer drinking fiance. And Molson isn’t in his top list of beer brands, but he wants to score a big box of this cider when we find it in independent liquor stores around Vancouver.

Josh also wants to study at a culinary school, only briefly doing it before he went into the army. He was looking at PiCA as one of his potential schools. I can’t speak if PiCA is always like this for all their classes, but I gave him a generally positive review. I’d much prefer to be a much more relaxed environment (a la Dirty Apron), but I appreciated the positive energy and helpfulness of the team that taught us to cook tonight. BUT, I learnt how to make a cider vinaigrette, how to season halbit cheeks and pat them down and properly fry them, boiling tips and much more in one go, so many being outside my usual comfort zone is better.

Thanks for inviting Gastrofork! The event was amazing, and well put together. I will be recommending people to visit both PICA and serving Molson Ciders during my summer get togethers if I can. 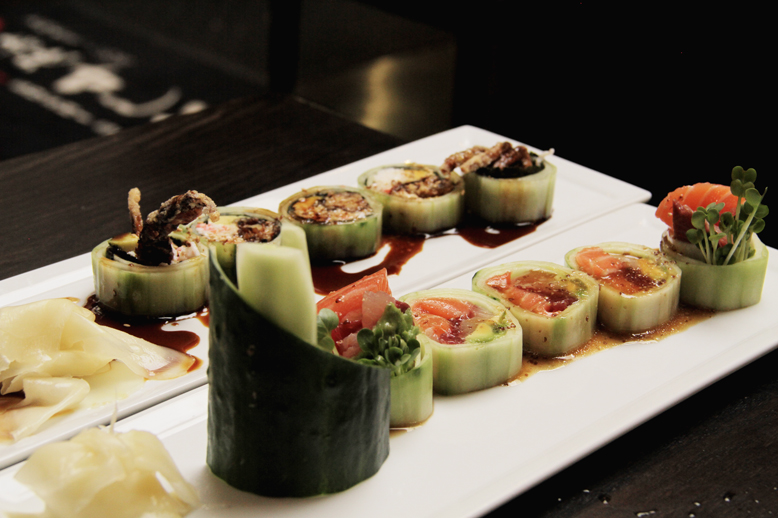 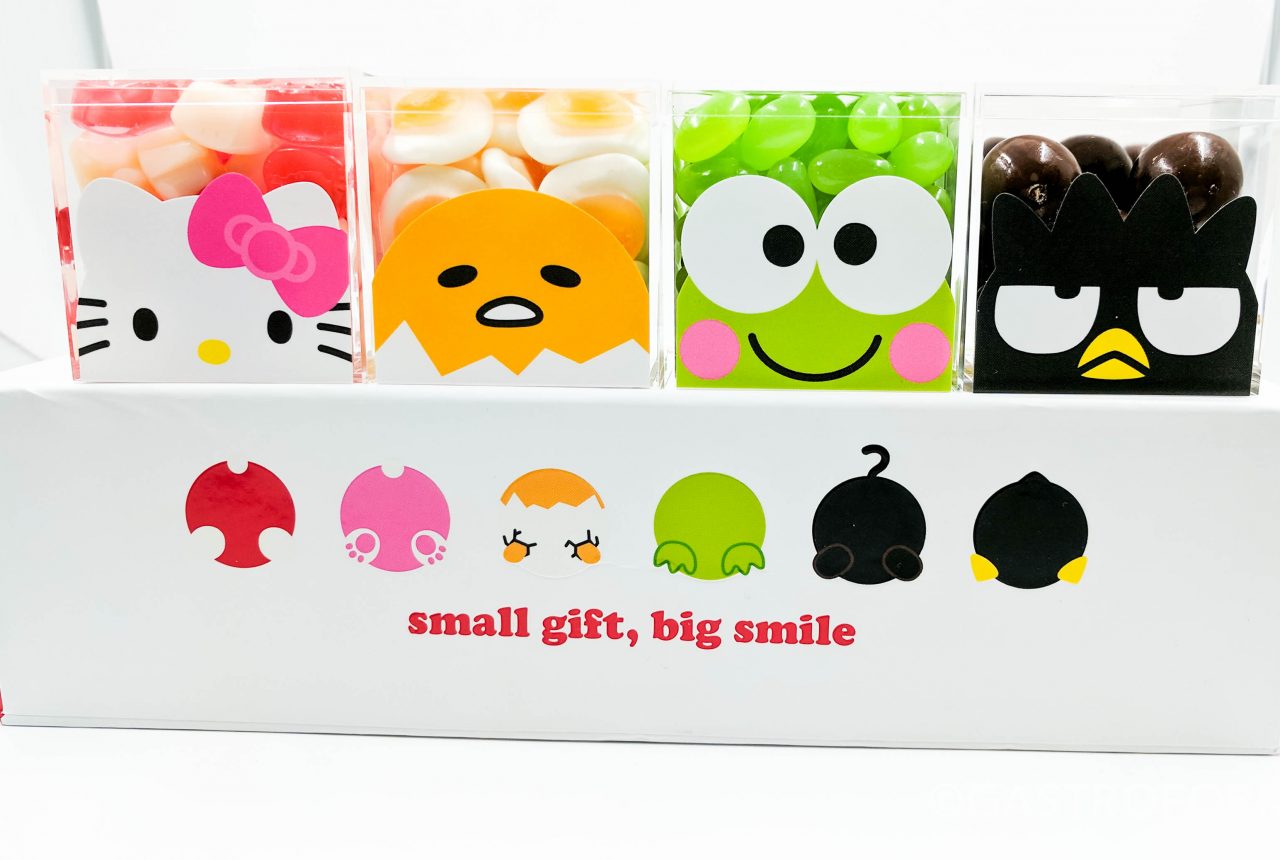