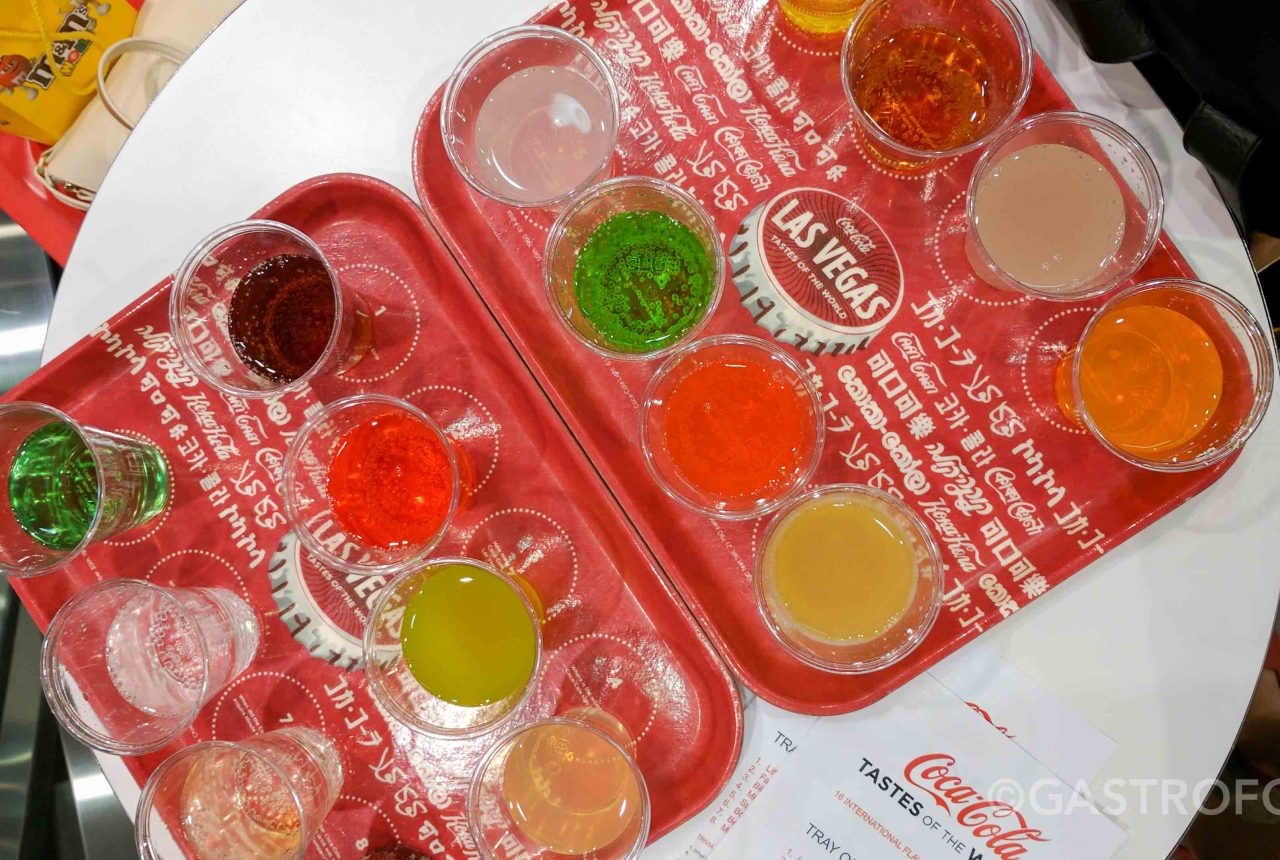 When you’re in Las Vegas, make sure to check out the Coca Cola store, it’s located on the southern end of The Strip, right next to M&Ms and right across Monte Carlo/New York-New York. The store has two floors of Coca Cola merchandise from t-shirts to stickers, chairs, kitchen items and much more. You can also stop at their drink area where they serve up your favourite Coca Cola flavours and the chance to try out “Tastes of the World”, 16 international Coca Cola flavours!

Because of the sheer amount of pop here, I’d definitely recommend sharing with 2-3 people. The taster trays costs $7, so it’s not too bad. 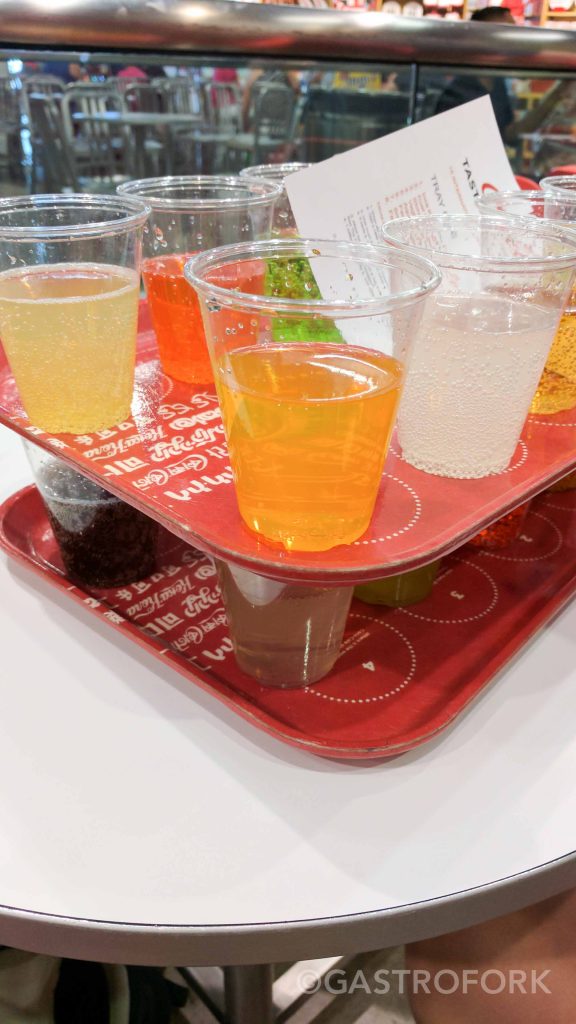 Here are the flavours you’re able to taste: 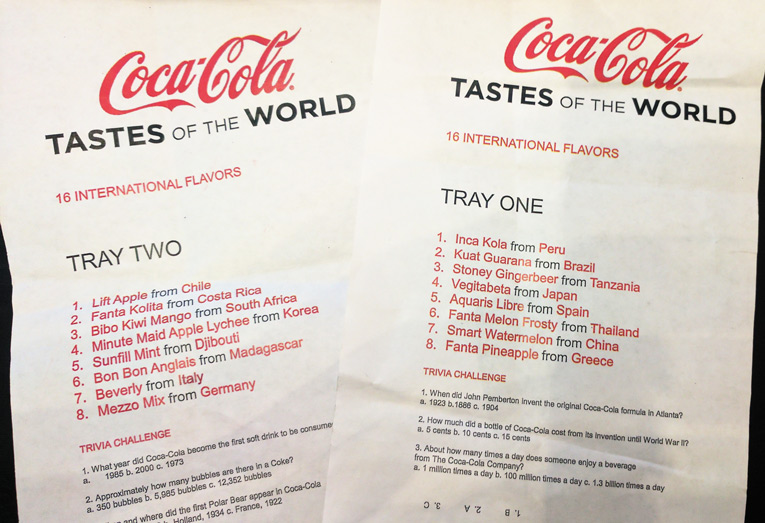 While there were some clear favourites in the group, I’m going to quickly go through my thoughts on each:

I found this one was a nice, dry flavour. It reminded me a lot of cream soda, but dryer/less sweet.

This drink kind of tastes like passionfruit and some stone fruits, not too sweet.

This soda has a slightly lemony flavour to it.

One of my favourite ones, this actually tastes a lot like melon. It is a bit on the sweeter on side, but very enjoyable!

7. Smart Watermelon from China
Watermelon is always refreshing – this drink is nice and light but has a good hint of the watermelon flavour.

8. Fanta Pineapple from Greece
This one was also a favourite of mine – I would definitely love to see this in the Canadian market! 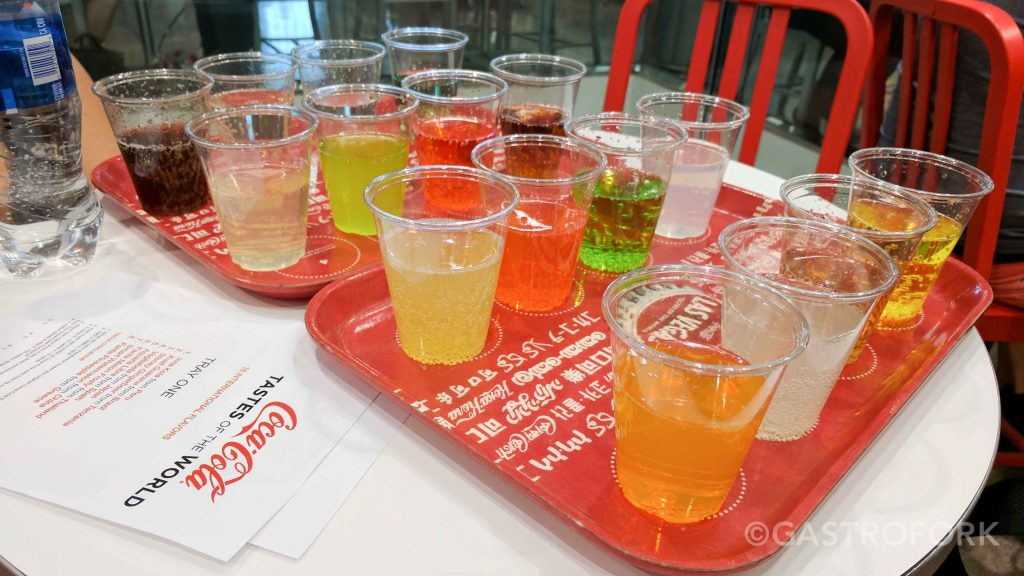 Okay, onto Tray Two. This is where flavours get interesting.

1. Lift Apple from Chile
This one tasted a lot like apple juice!

2. Fanta Kolita from Costa Rica
This cola is sweet and slightly tart.

3. Bibo Kiwi Mango from South Africa
This was a nice, fruity mix of kiwi, mango and pineapple. It was a little bit on the sweeter side.

4. Minute Maid Apple Lychee from Korea
This was one of my other favourites – the most predominant flavours is lychee and a very mild flavour of the apple. But overall not too sweet.

5. Sunfill Mint from Djibouti
This one was definitely one of the most unpopular amongst my group. It’s a mint flavour, it’s got the green tinge to it so you think of it looking like mouthwash and tasting like toothpaste. But if you keep an open mind, the mint flavour is pretty mild – much more mild than I thought it would be (I really thought it would taste like mouthwash). The colour is a little off putting, maybe if they made is clear, it might be more appetizing?

6. Bon Bon Anglais from Madagascar
This had very little taste to it, that being said, sweet, but most likely from the corn syrup.

7. Beverly from Italy
I have to laugh thinking back to my friends trying this, they were so off put by it! It definitely isnt soda in the traditional sense where you’d imagine soda to be sweet and fizzy. This is more of something you would drink after a heavy meal – much like an aperitif. It has a lot of spice-flavours in it – bitters and a bit of citrus in it. Could I drink this on it’s own? Probably not. But I’d have to say it’s the worst thing I’ve had, I can see why it would be popular in Italy, as they like their bitters to counteract their big meals.

8. Mezzo Mix from Germany
This mix is slightly sweet but mostly citrus in flavour with a nice tart finish to it. 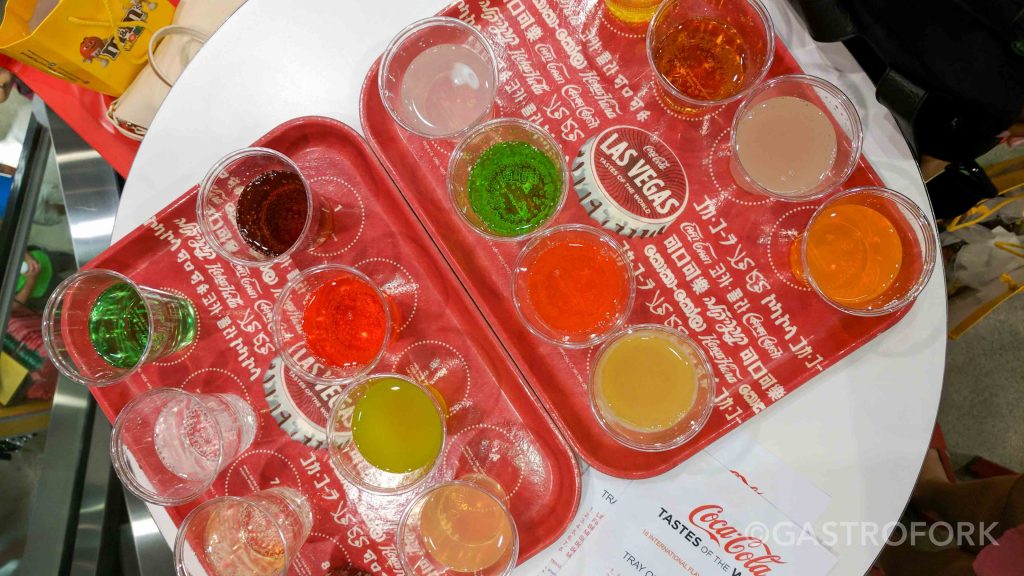 Have you been to the Coca Cola store? I’d love to hear your thoughts on which were your favourites (and ones you’d pass on). If you’re in Las Vegas and want to try these flavours, I’d definitely recommend it! You can also try an additional tray as floats, but it seemed like a lot to us at the time. 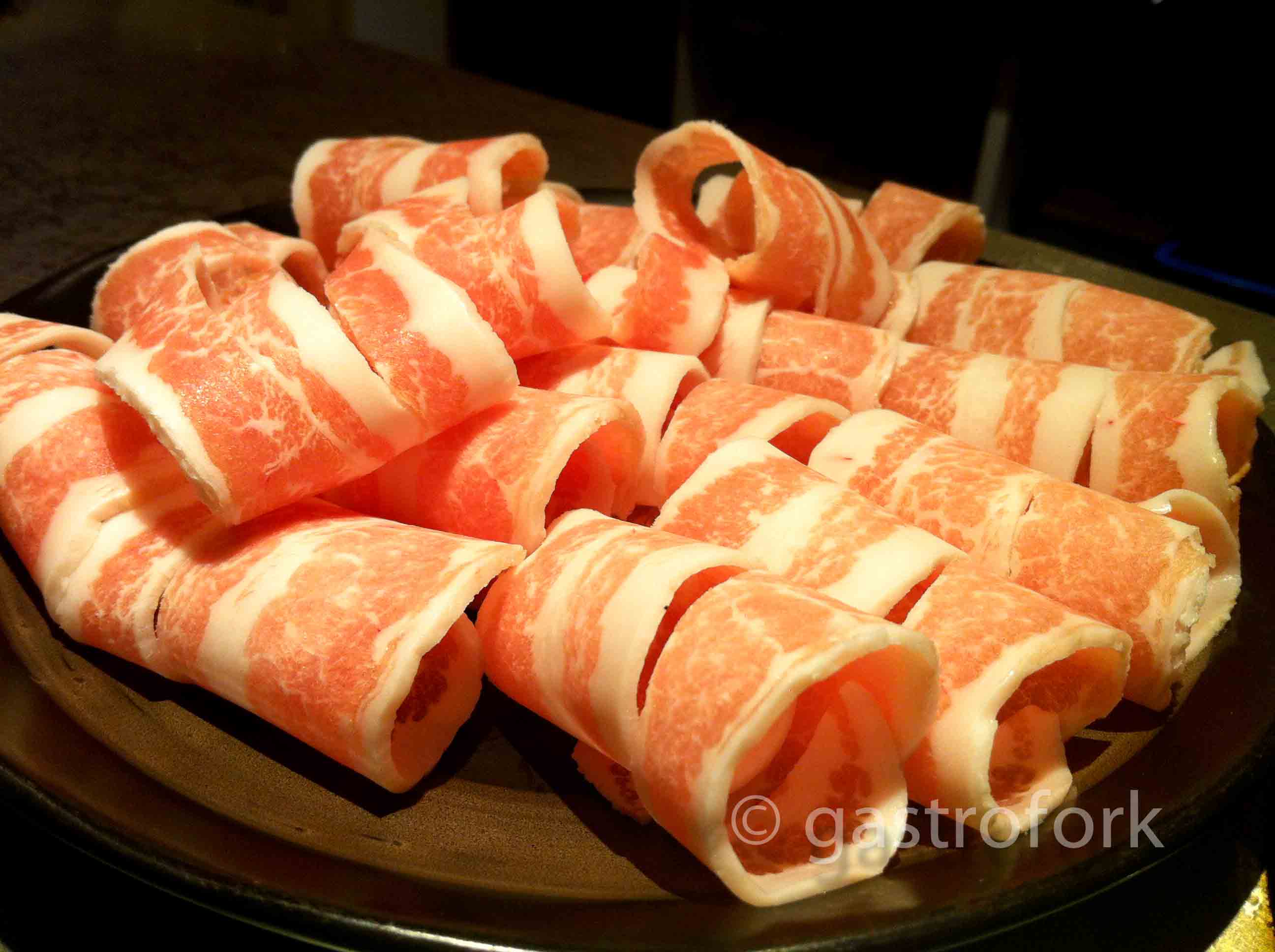 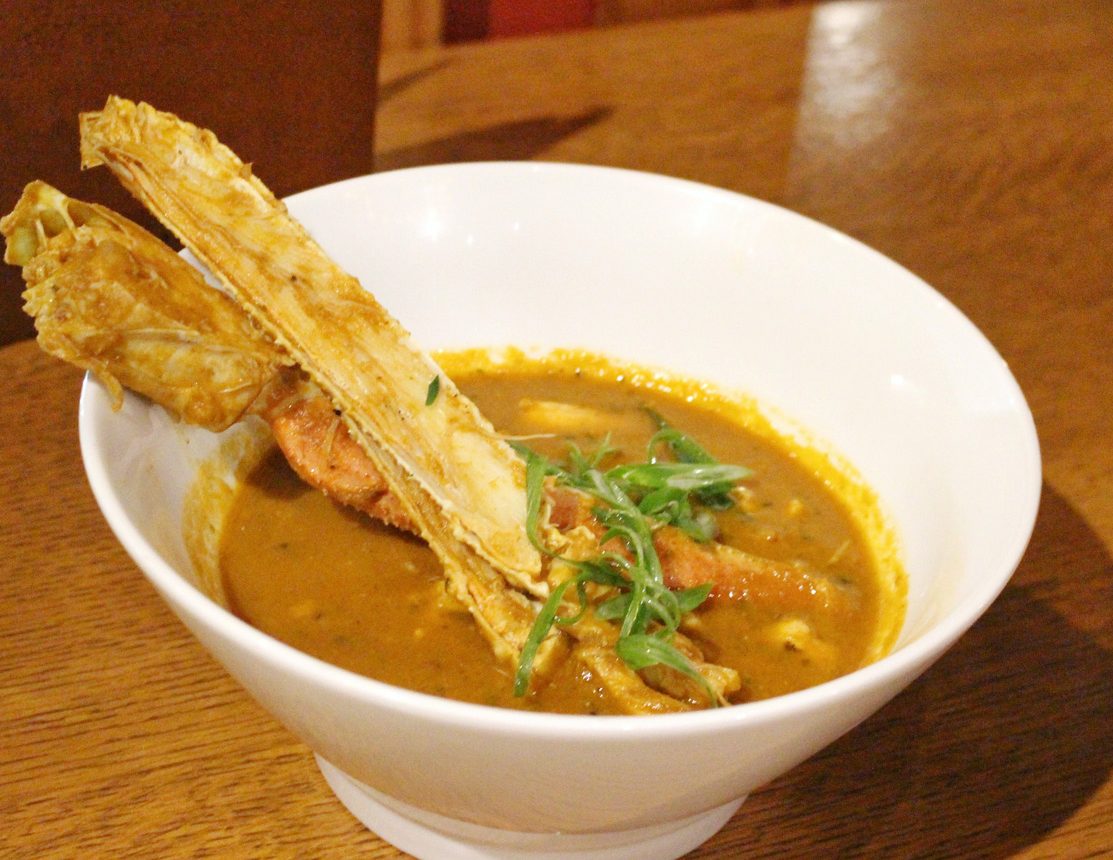 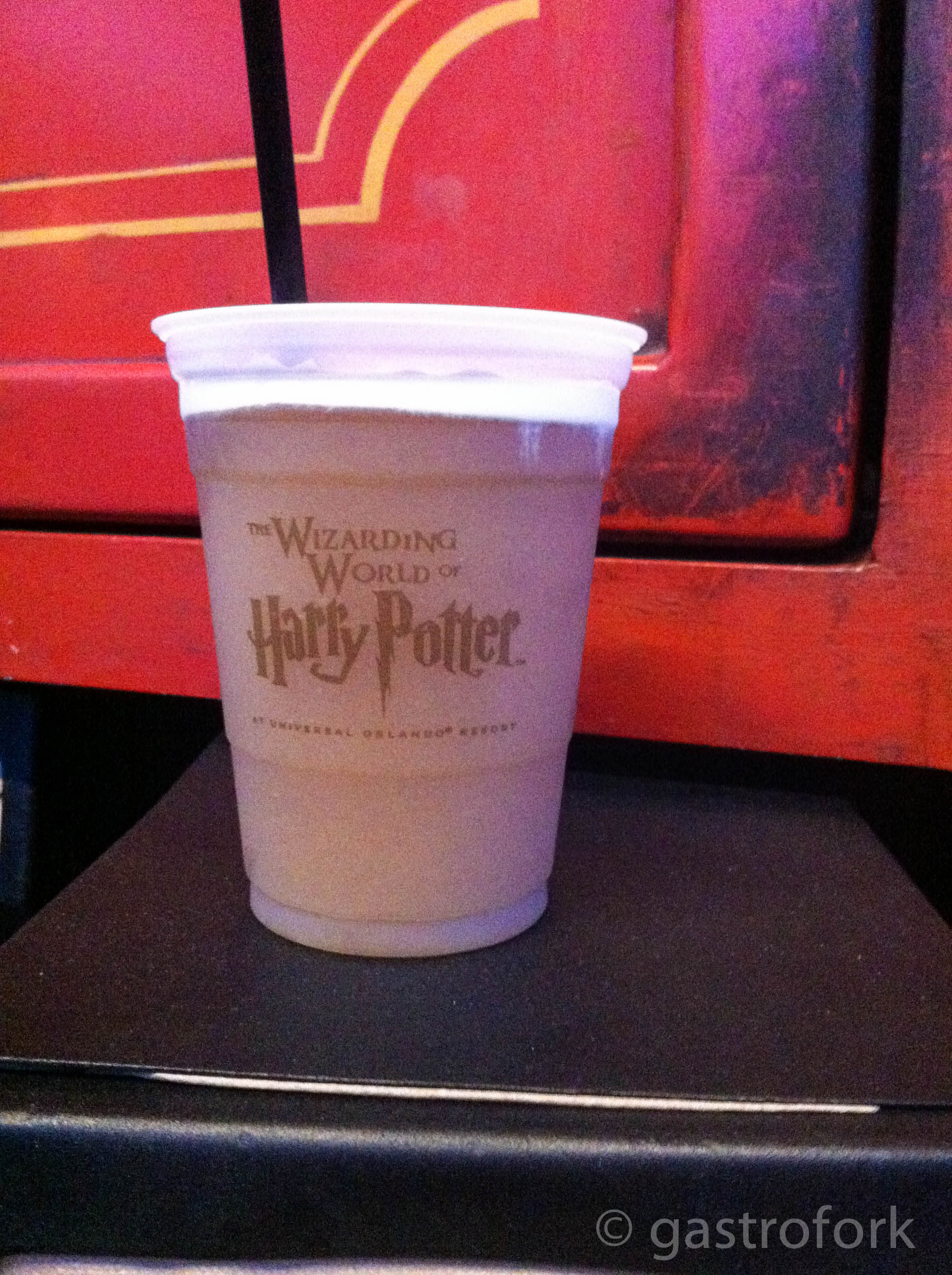