I recently had the pleasure of attending a wedding with the banquet being at the Richmond Kirin (the one near Richmond Centre). I hesitated whether I would rate a wedding reception considering it doesn’t really reflect the restaurant’s quality and commitment to making dishes (I guess in a way, it still sort of does) more than mass making dishes. But I was surprised as the quality put into the dishes here, so it changed my mind. 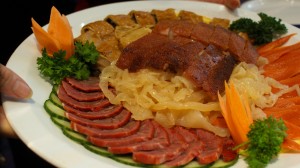 The first dish is called the “Kirin Special Platter with Roasted Suckling Pig”. As you can see, its the typical ‘cold’ appetizer platter served at almost any chinese restaurant. There’s chinese mushroom wrapped in deep fried bean curd, roasted suckling pig, jellyfish strips, smoked salmon and um..I’m not quite sure what to call the last part, but it’s basically like cold sausage/meatloaf. I definitely thought each appetizer was tasty. 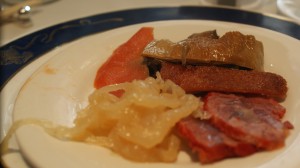 The smoked salmon is my favourite – because they normally never serve that at any other chinese restaurant. The jellyfish had a good ‘crunchy/chewy’ consistency (but not of the overcooked kind), the beancurd and mushroom tasted fresh and the roasted pork skin was still crispy. The meat/sausage was tender and fatty.

Next dish was “Sauteed baby sea cucumber, scallop and chicken with vegetables. I like how when they separate this dish for the whle table, they give you each piece of the dish. It was definitely buttery and had hints of sesame oil in the sauté, the peas were not over done and all the meats were tender. I even had a slice of cucumber on my plate and I jokingly asked my husband if this was the baby sea cucumber. The next “dish” was served right after we received the baby sea cucumber dish, so that’s the reason why it’s sitting on top of my dish. It’s deep fried crab claw wrapped in minced prawn. I love my deep fried stuff, and this is one of my favourites. The entire ball part is PACKED with prawn – so GOOD! The crab claw itself was still tender and not too flaky and dry. 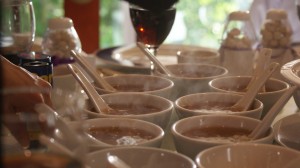 Up next was “Shark Fin with Crab Meat and Fish Maw Soup”. 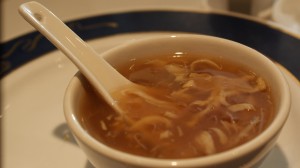 I know there is a lot of controversy surrounding this particular dish and I don’t particularly support the whole idea of ‘Shark Fin is a delicacy’ and I would never order it on my own, but since this is a Chinese wedding, it is pretty much expected this dish is gonna come up. Anyway, the soup was served piping hot, most of it was crab meat. I like the thickness of this soup but I find it quite bland so I layer on the white pepper and vinegar on this stuff. 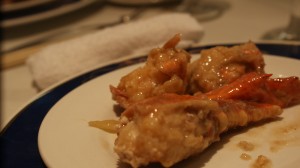 Our next dish according to the menu was “Live Lobster in Consomme with light ginger and green onion” but um, I’m assuming we got something different – probably better. The lobster was served more like fried and glazed with garlic and some sort of milky sauce. Whatever it was, it was damn delicious. 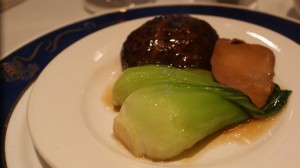 On the menu this was a mouthful:  “Sliced Wild Catch “California Mexico” Brand Abalone braised with Chinese Mushroom in Oyster Sauce” …I don’t know why California Mexico had quotations around it, but I’m not going to ask. The abalone was tender, a bit small in size (but given since it was a banquet), an enormous chinese mushroom (of which I fumbled with a bit due to my horrible chopsticks skills) and two baby bok choy. I really enjoy this dish, mostly for the vegetables and the thickened oyster sauce gravy mixture. 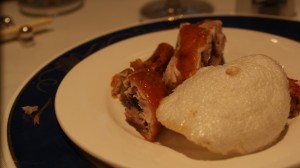 Our…7th? dish was Crispy Skin Chicken. By this point of the meal, I was getting pretty full. I’m glad they space these things out, otherwise I wouldn’t be able to eat much. I gave most of my chicken to my husband – but I did get to try a little – it was very moist and tender with great salty flavour! I have to admit though, my favourite part of the dish are those chips they give with it. 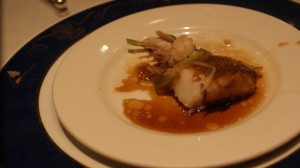 The 8th dish was Steamed Live Rock Cod. I’m not a big fan of fish unless its boneless – but this fish was delicious. The way it was steamed with the soy, green onion and other flavours really complimented the fish. It was also still ‘meaty’ and not flaky. Yum. The next two dishes were served together – Stewed E-Fu Noodle with scallion and Fukien Fried Rice. To be honest, I was so ridiculously full at this point I didn’t want to try both, so I tried the noodles which were full of flavour and not dry. 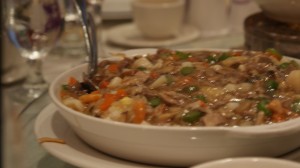 I didn’t get to try the Fukien Rice, but it looked really delicious too. Finally the desserts!  We got the sweet soup (which I like to call “ball soup” since there are so many different kinds of balls in it) – which I skipped on. I think most people did too because they were full. 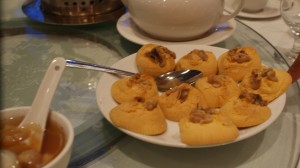 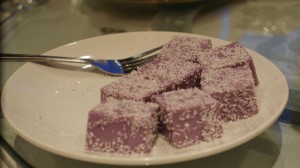 And..I’m not quite sure what this was, it’s kind of milky jello – maybe purple yam and covered in coconut flakes. Pretty good.

All in all, I was really impressed with Kirin – but I’ve never heard a bad review from Kirin ever. What a great place to go and treat yourself or maybe guests from out of town with. Our cups were always full and the service staff was knowledgeable and friendly (!!). A great big congrats again to the bride and groom – Nicole & Andy on their recent nuptials!! All the best to you both! 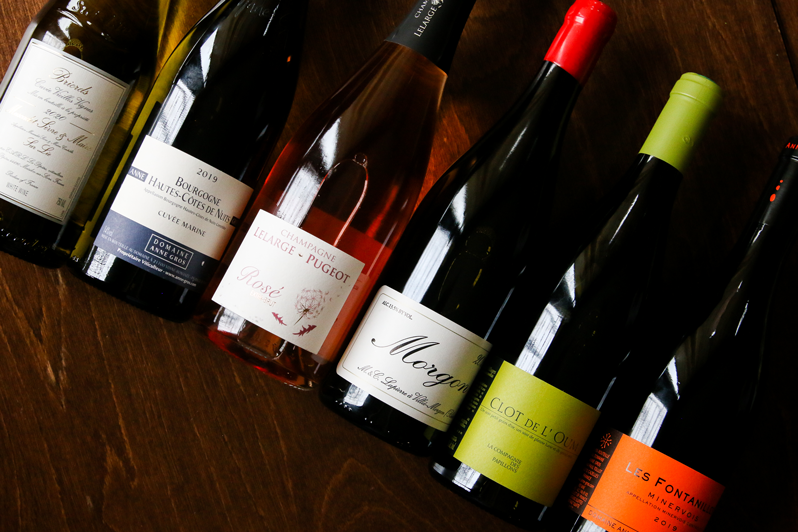