Landing in Germany, we actually first had Kebap – kebab, donair. There are a lot of Turkish in Germany, so the kebap is really delicious! Selma, her mother and I went to a little dive in Frankfurt after getting lost finding our hotel. Our hotel said it was near the airport, but we had a little nature hike along a random street and a grassy backroad. We asked a young lady for directions. She was dressed in a lovely pair of linen pants and an orange top. She hesitated, speaking in limited English, with a bright smile. Her dog continued to trot along the path, as she motioned to where we should go. 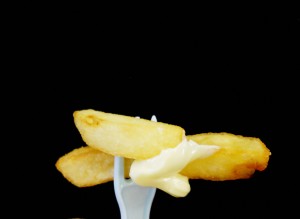 One thing I love is the mayo they serve with fries. Seems unhealthy, but it’s not too far off of chipotle mayo. I’ll be eating this lots now, so a warning in advance: I am not pregnant or anything.

The gents who ran the restaurant, boisterously talked to each other at the service counter. An older man, presumably the owner, was very kind to us. He sat us down and put the menus down, helping us order. I remember seeing the wicker chairs outside on the patio, a dull yellow, their hues dipping into indigo as light faded, a fragment of this wonderful new world before me. 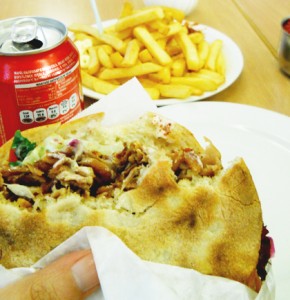 The next morning I went to a backerei – a bakery. I had a pretzel with a piece of sliced cheese in it. I ordered a cafe au lait and got why Americans call it Cafe Ole. There are bakeries everywhere. This was either a Ditsch or a Le Crocbac near the DB office in the Frankfurt Main Station. 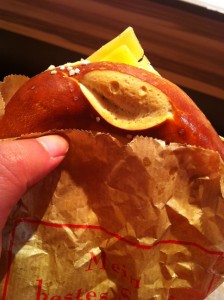 Later, we went to a market in Frankfurt Main Station. Everywhere you turn, there’s fresh bread and pastries, even when you’re not in the market. There are many kiosks. I love how their fast food is actually fresh bread and lunchables.

Selma cannot eat pork. She had to get her sandwiches “ona schweinefleisch”. Me on the other hand, I had a sourdough bagel with salami, tomatoes and lettuce. Yum! I wish we had something like this in Vancouver. I only paid 2.50€. 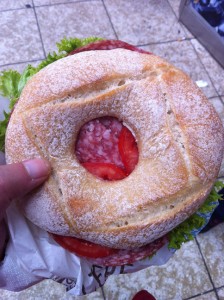 I had currywurst later at a Currywurst Express. I love the idea of curried ketchup, too. I love bathing my fries in ketchup, my friends will often remark: “Want some fries with your ketchup?” I love curry from my vegetarian days, which would make my vegetables gourmet. Two things I love. 1 + 1 = awesome.

At this point of the trip, I didn’t know all my German numbers and phrases to order. I ordered this without Selma’s help and found myself pointing to things. I realized I had to learn the language quicker, as I confused the ladies working the Currywurst Express.

Selma and I did groceries. We got bread, cheese, tuna, muesli (which is from here!!), tomatoes and bottled carbonated water. I was feeling ill, sick to my stomach, so I was avoiding tap water. So, mineral water is a thing here. When you order “wasser”, they often ask “mit gas?” (with gas?) Plain water is still wasser. After venturing Berlin, we went to a Thai joint. I had chicken coconut curry. Germans seem to love their Thai and Asian food joint – there’s no shortage of them in any city here. I discovered that beer was only 1.60 €, unlike the crazy $6-8 I’m used to at home. I had a Berliner Kindl.

Earlier, I mentioned I did groceries.  At the super market, the beer is only 50-89 cents! I got a light Weiss beer, 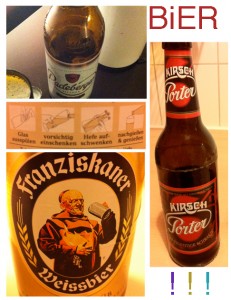 which Selma actually liked. She hates dark beers and (I think) hoppy ones. The brand was Frankziskaner Weissbier. (White beer) I also tried Radeberger Pilsner, which was a bit more bready than Frankziskaner – like slick, fresh baked bread. I later had Kirsch Porter, which was disgustingly creamy and sweet. I hate sweet alcoholic beverages. Too much cherry. I then tried the Schofferhofer, which was soft and fresh. I liked Frankziskaner above them all.

The next day, I had Nordsee with Selma. Their fish sandwiches are so good and cheap! My favorite is the backfisch baguette. I also tried their sushi. It’s strange, they didnt’t use Sticky rice! It was very compact and not soft rice, but good. Compared to Vancouver sushi, I wouldn’t recommend shelling out for German sushi. It’s not bad, it’s much like Toronto sushi which is good but when you’re from Vancouver, you feel some sense of strange superiority. (My bias exposed) I got a cute soy fish though. 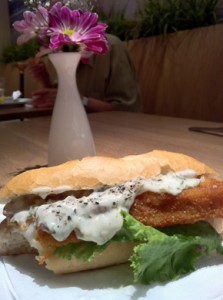 Later that night, I was craving soup for my incoming cold and sore stomach. We made a sort of chili soup with beans, zucchinis and tomatoes. It was super cheap again to get groceries. For instance, cheese is 1.19-2€. That’s around $2-3 for a pack of cheese. Our chili soup was all together 80 cents to make. My stomach was no good. I was popping a pack of Immodium pills my sister had packed for me. I noticed in my pack were fruity Tums, so I decided to switch to those. That and I was chain popping Gravol for the train rides. I was bit of a drug addict. 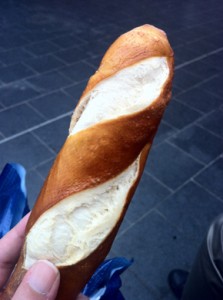 The next morning, we went to a backerei. I had laugenweck- pretzel bread? EA serves this type of bread at their EAt Cafe. I never can find it in our super markets, but they sell this everywhere in Germany! I like how the pretzel bread is doughy and salty. Yum!

These were only 40 cents, so I knew I could have a good, cheap snack in the afternoons.

I love how eating bread is common here – even little kids will have pieces of bread bigger than their faces. 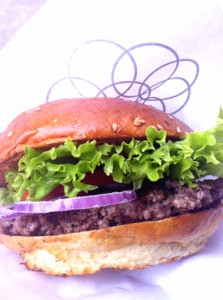 I had a food truck later in the afternoon. It was called Burger de Ville. It promotes itself as a bio (organic) joint. Not greasy, but moist and served with fresh veggies, despite my stomach pains, I ate this without feeling terrible later. The meat was very good. I would give them a solid 4.5/5. I’m not 100% sure if they’re German, but they are worth the money to eat. Fresh, hearty meat and great, quick service, they were a great stop by.

While Selma and I were shopping in ritzy, artsy but expensive Mitte,  we stopped at KaffeeMitte. I had an apple pie, Selma had a kirsch pie. The culture here it seems is to have cake and coffee and slow down. I am going to miss European pastries. The apple pie of mine wasn’t sweet at all. I usually hate apple pie at home. I’m not joking. I absolutely detest it being sloppy, drenched in brown sugar, slathered in super sweet ice cream. 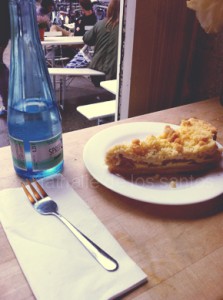 At KaffeeMitte, the apples weren’t super sweet and the crust was crumbly and moist in the inside of the dough. The brown sugar just seemed to be the equivalent of someone gingerly sprinkling icing sugar on the apples. It was so perfect. I watched girls drink cappuccinos and eat the foam with spoons. Go to a Starbucks at home, and the foam isn’t as velvety as here. I used to work at one and I know for a fact foam is not a big whoop nor are we really trained to create a silky, high class layer of it. Mostly we’re taught not to have a lineup and unhappy customers. I remember one day, I just decided to never show up to work again at Starbucks, because the only thing I was learning to do was make short cuts in service and cleaning by my supervisor.

Later, we made dinner again. I picked up some Hanuta and Goldbaren. Hanuta is two wafers with nutella in between and whole hazelnuts. Goldbaren is by Haribo, and it’s gummy bears! I like how they’re actually fruity. Michelle recommended these both to me as she travelled Europe in the past. Michelle is an illustrator and teacher, who I studied with at Emily Carr University. I nabbed some gummy bears for her. There was much more food I wanted to try in Berlin, but Selma suggested I save the sausages, schnitzels and bier for Munich, in the Bavaria region.

My life back at home seemed distant and strangely not so pressing any more. I wondered occasionally, how everyone was doing. I tried to fathom life before Facebook or the web, when distance was distance. But even still, the flicker of the digital world sometimes made me wish I could bring people with me here. 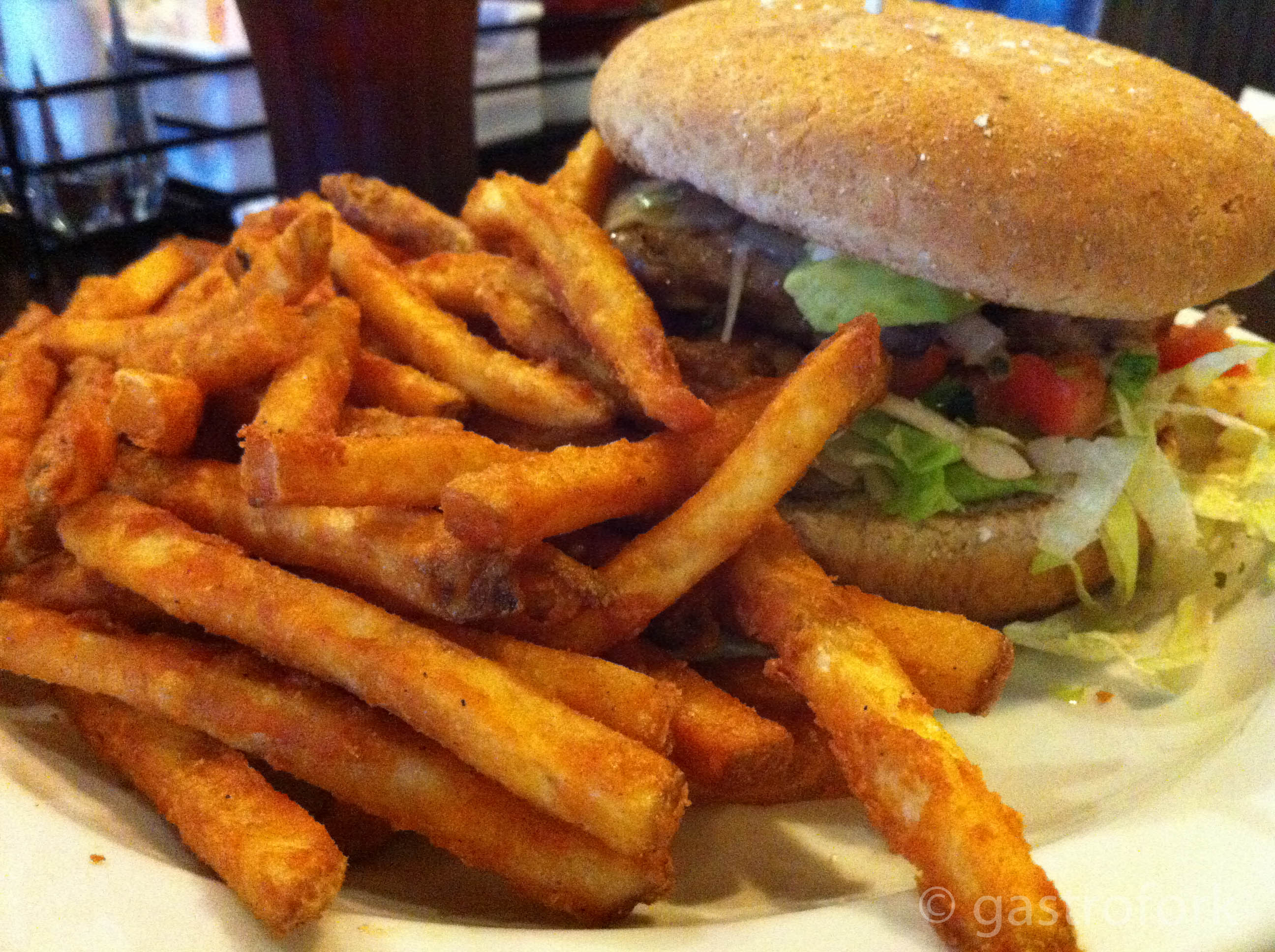 MyDenny’s App and Dinner at Denny’s